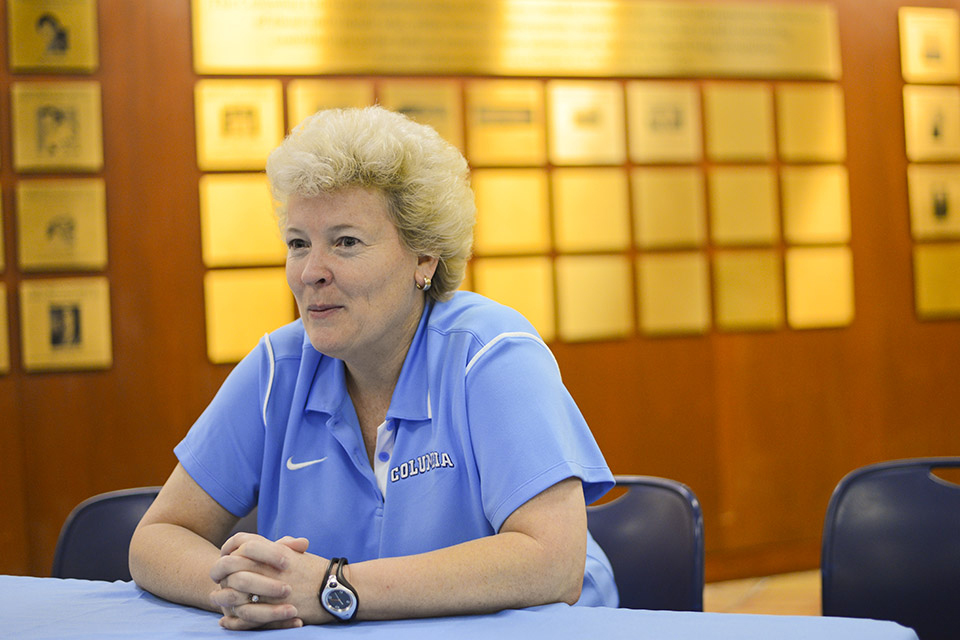 The women's basketball team is moving on and looking forward after the departure of its head coach Stephanie Glance two weeks ago.

Glance, who took over as the team's head coach in April 2013, resigned from her position at the helm after taking the position of executive director for the Kay Yow Cancer Fund. She said that her decision to leave coaching was a tough one and she'll always treasure her time at Columbia, but she's excited to fulfill a longtime dream of hers.

"I feel grateful and thankful for the time at Columbia that I've had," Glance said. "But this is really making a total career change, and it's a chance to do something that I really have a great passion for."

Taking over the position of head coach for the Light Blue is Sheila Roux, an experienced assistant coach who worked alongside Glance before she even came to Columbia.

"Obviously I have some very big shoes to fill," Roux said. "But at the same time I've walked alongside the shoes for five years, so I'm very fortunate in that regard."

Roux's coaching philosophies mirror those of Glance, and after being a part of laying the foundation, she knows just where to pick up. Roux said that the first priority is ensuring that the players adjust to the major change, and don't let that adjustment get in the way of what the program is trying to do.

"It was a bit of a shock to them, so at the base of every decision is the well-being and the experience that our players will have," Roux said. "I'm spending a lot of time talking to our players and their families and reiterating to them that, although I have a different voice, I still came here with her with the same vision."

With the addition of this season's talented crop of first-years, Roux will have more to work with this season than any Columbia women's basketball coach has had in a while. The incoming players form a group that was ranked the top recruiting class in the Ivies and No. 57 nationally.

On top of that, the team is returning some top talent in junior forward Tori Oliver, who led the Ancient Eight in scoring last season, and sophomore forward Camille Zimmerman, who brought home a program-record six Ivy League Rookie of the Week awards.

Zimmerman said that the team is only continuing to notch up the intensity.

"I think as a team we really appreciate that we still have Roux and we still have coach Trena [Trice-Hill] and most of our staff is still here," Zimmerman said. "She's doing a good job so far. We've had five skill workouts, and she's seems like she's picking up the pace, and she's fitting in just fine."

This isn't Roux's first time serving as an interim head coach. Ten years ago, after the unexpected departure of the team's head coach, Roux coached the women's basketball team at her alma mater, Minnesota-Crookston.

Glance said that she is confident in Roux's abilities to lead the team and to continue to build on the foundation that has been laid over the last two years.

"She has a great passion for the game and for mentoring young people, and she really wants to be at Columbia," Glance said. "She wants to take the foundation that we laid and the things that were put into place, and she wants to build it into a championship program."