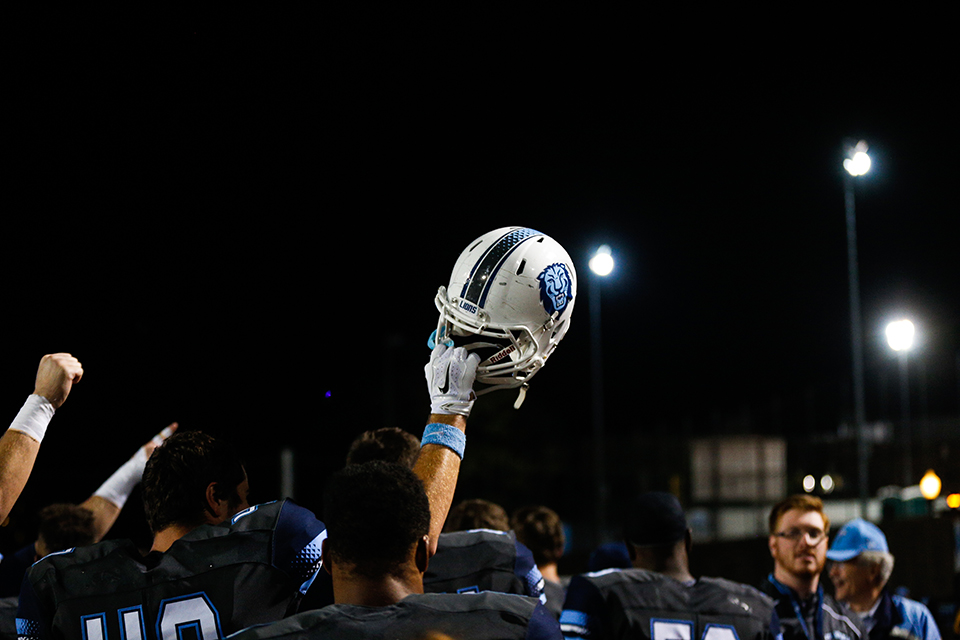 Junior quarterback Skyler Mornhinweg led the Lions to victory in his first season at Columbia.

During the final moments of Saturday's game, the players danced on the sideline, the student section roared, and the band worked itself into a frenzy as the football team closed a tough chapter in its history.

From the sweat-streaked victors on the field, to the long-suffering student fan base, to the patient core of alumni supporters, the Light Blue breathed a sigh of relief. Columbia won a football game.

On Saturday, under the lights of Lawrence A. Wein Stadium, and in front of a rowdy, if not entirely packed, Wein Stadium, Columbia beat Wagner, 26-3.

And with the blowout victory over the Seahawks (0-5) , Columbia Lions (1-3, 0-1 Ivy) broke a 24-game losing streak wrought with frustration and despair. The inauspicious streak—which has plagued the program for two-and-a-half seasons—is finally, mercifully, over.

But the victory was more than an end to an era; it was the start to a new one. The win showed how far head coach Al Bagnoli has taken the Lions in seven short months. It showed—in short—hope for the future.

For the first two quarters of play, the Light Blue ran a nearly flawless offense, executing efficiently and racking up 247 total yards. At the same time, the defense played with discipline and energy, capitalizing on the Seahawks' many blunders.

"We had opportunities to capitalize on things and we weren't able to do it and we were blowing opportunities in other games," head coach Al Bagnoli said after the game. "Today, we didn't miss any. We completed them and we capitalized on them."

The lopsided scoreline was reflected in nearly every facet of the game: the Lions outgained the Seahawks 320 - 189; they more than doubled the visitors' total passing yards, 166-70; and they tallied three turnovers to the Seahawks' one.

On third third-and-10 from the Wagner 40-yard line, the Wagner rush beat the Lions' offensive line off the ball. Feeling the pressure, Mornhinweg scrambled towards the the sideline. Running out of real estate, he threw across his body for a 16 yard completion to a leaping wide receiver Cameron Dunn.

Soon after, Molina danced his way through would-be-tacklers to break the plane and put the Lions up 6-0.

Flipping the narrative
After the extra point, Wagner began to make a series of critical mistakes.

A holding call on the kick return pushed the Seahawks back ten yards, to their own 20-yard line. On the first play from scrimmage, sophomore quarterback Alex Thomson missed the snap, sending the ball rolling towards the end zone.

Senior linebacker Max Keefe—who blocked a punt last week—scooped up the loose ball and dove into the endzone for the Lions' second score in 16 seconds of game time. Keefe attributed the big play to a well-drawn stragtegy and his own ability to execute.

"When the opportunity presents itself, you've got to take advantage of it," he said.

Over this stretch, Columbia remained poised, while Wagner compounded error after error—a complete reversal of the Lions' performance over the last two-and-a-half seasons.

The Lions then found their offensive groove, putting together back-to-back scoring drives midway through the second quarter.

Then, after a short Seahawk possession ended up in turnover on downs, the Lions raced down the short field, advancing 63 yards in just five plays and two-and-half minutes.

Mornhinweg capped off the scoring drive with a spicy, 32 yard run, weaving his way into the end zone and giving the Lions a 23-0 lead.

This string of consecutive positive drives has been a rare sight for the Light Blue faithful in past years. While the Lions have put together solid scoring plays over the past two years, rarely have they scored back-to-back. The 24-0 run took the air out of Wagner and electrified the crowd.

And as the Lions rolled, the Seahawks absolutely unraveled. After Mornhinweg's rush, Wagner kick returner accidentally stepped out of the endzone before retreating and downing the ball. The bizarre play resulted in a safety, upping the Lions' lead to 26-0. Continuing the tailspin, the Seahawks surrendered 3 turnovers after the safety, keeping the Columbia offense on the field.

Spreading the love
Mornhinweg, in a performance that was a marked improvement upon his three-interception showing against Princeton last week, piled up 143 yards through the air. Unlike the Georgetown game, in which he primiarily targeted senior Scooter Hollis, Mornhinweg distributed his passes evenly throughout the receiving corps.

In addition to Scooter Hollis, senior Hank Trumbull and junior Ben Kaplan each pulled down catches of fifteen yards or more, moving the chains efficiently.

Three Lions—Mornhinweg, Molina, and junior Alan Watson—contributed to the rushing game, each posting 30 yards or more. Though more of a prototypical pocket passer, Mornhinweg posted a game-high 80 yards on the ground.

Watson stepped into the game in the second quarter after a hard hit sidelined Molina, bolstering the running game with several long runs.

Wagner's sole score came on a 23 yard field goal from Bryan Maley at the end of the half. Running back Matthias McKinnon lead all Seahawks on the ground with 57 yards over 10 carries.

Neither side scored in the second half, but Columbia didn't need it. The Lions played disciplined defense and conservative offense over the final two quarters, working back ups into the game and turning the final 15 minutes into a victory lap.

Coach Bagnoli said the performance was no Picasso, but his players showed the effort and energy he has tried to instill throughout the season. In the locker room after the game, the celebration was 'chaotic,' according to junior linebacker Gianmarco Rhea.

"It's a surreal feeling," Rhea said. "We finally got that monkey off our back so we can move forward with confidence."

Bagnoli said that the win was a huge hump for the team to make it over, but that it is merely the begninning of something larger.