After injury of top scorer, women's soccer will have to find new offensive power

After injury of top scorer, women's soccer will have to find new offensive power 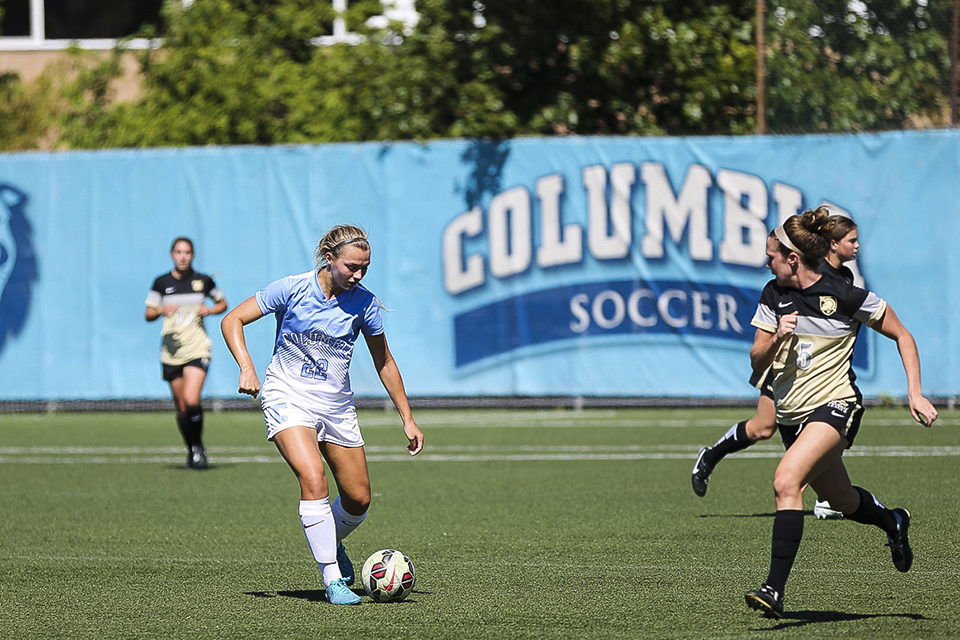 A pair of new faces on the women's soccer team have been turning heads this season. But after an injury sidelined one, the team will be looking to experienced players to fill the void.

First-year forwards Emma Anderson and Rachel Alexander moved to Morningside Heights in August, but they've already made an impact for the Lions as the team's top scorers. The two have combined for seven goals so far this season, but now the Light Blue might be in trouble after Alexander suffered an injury last weekend and has missed play since.

Now, the team needs to find more players who can put the ball in the goal.

"Losing her is definitely going to be a tough situation, if that's what it is," Columbia head coach Tracey Bartholomew said after the game in which Alexander was injured. "Other people have to pick up where we're not scoring."

But Columbia has struggled to find the net beyond the two forwards. Only two other players, sophomores Caroline Militello and Natalie Neshat, have scored this season for a combined total of three goals.

This is not a new dilemma for the Lions. Last season, then-senior forward Coleen Rizzo was the only player to record more than two goals. Still, 11 players on that squad recorded at least a goal on the year, significantly more than the four of this season.

Alexander's goals were directly responsible for three Columbia (5-6-1, 1-1-1 Ivy) victories. The first two were game-deciders in back-to-back contests—1-0 defeats of Manhattan and Iona on Sept. 11 and Sept. 13, respectively. Her third goal came the following week as the equalizer in a 2-1 victory against Army on Sept. 20.

Bartholomew believes the key to Alexander's scoring has been the forward's recognition of opponents' defense.

"Rachel's been able to read [defenders]. If she gets show in the inside, she'll drive hard and look to combine or get in behind. She's a quick player and has a much better touch than I think people realize," Bartholomew said. "When she gets on the ball, you know something exciting is going to happen."

Although Alexander has not recorded any goals since the game against Army, Bartholomew believes that the close proximity of the goals have since made it more difficult for her to score, as it has drawn opponents' defensive attention towards her.

"They know she's coming," Bartholomew said. "They're trying to disrupt her."

Likewise, two of Anderson's goals played a crucial role in giving the Light Blue victories in two different games. She scored the decisive goal against Army and did the same in a 1-0 thriller with Brown on Oct. 3.

Bartholomew thinks that the timing of Alexander's goals have assisted Anderson in her scoring.

"Rachel now has a lot of people on her now because she was scoring early, and then Emma just started to score even more," she said. "It's hard to stop two people. It's easier to stop one."

Anderson's success once she has the ball comes from how she reacts to defenders, according to Bartholomew.

"She's very strong and has learned how to hold people off. And when they get on a different side, she's able to turn people and create some dangerous situations," Bartholomew said.

Anderson says that her timing and body movement also help propel her toward the goal.

"I think my size is definitely an advantage," Anderson said. "It's worked thus far, knowing how to use my body and when."

Such skill was most apparent in the victory over Brown. After receiving a flick in front of the box, she spun past a defender to set up a drive into the left side of the net to break a scoreless tie in the final minute of regulation.

"It was unreal," Anderson said of scoring the late game-winner. "You kind of dream about those moments and you think that maybe once a career that will happen. You don't think it's going to happen in your first year in your second Ivy game at home, but if you're lucky … it goes in."