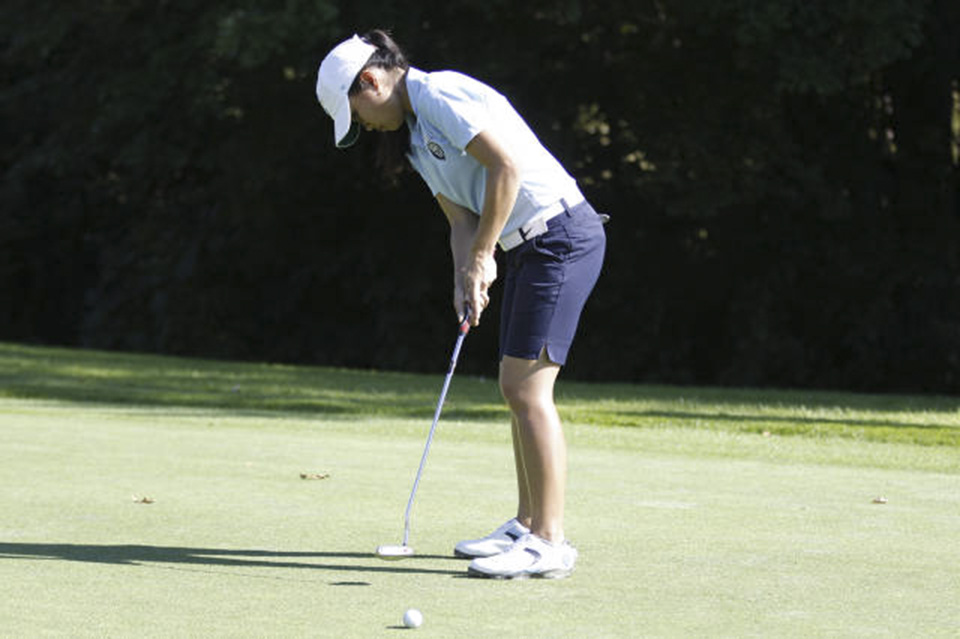 Junior Jackie Chuyla is one of three members of the Lions who has traveled to each of their tournaments this fall. She capped off the season taking first place individually in the Cardinal Cup.

Remember standing in a line in your middle school gym class, waiting to be picked for a team in front of all your peers? As difficult as that was for you, it may have been even harder for the captain picking the players.

Women's golf head coach Amy Weeks faces that situation each week. She has a roster of nine golfers—but only five can travel to specific tournaments.

This fall, Weeks selected the same three players as mainstays for all four tournaments: senior Monique Ishikawa, junior Jackie Chulya, and freshman Kristin Chung. All three have played well throughout the season, with Chulya placing first individually in the Cardinal Cup, the final tournament of the season.

Of the remaining six players, only two—sophomore Monica Chen and senior Lilette Mocio—have been to more than one tournament. The rest have only participated in one, though first-year Amy Ding competed as an individual when she traveled to the Lady Paladin Tournament, rather than with the team.

For the coach, choosing which of the golfers to play is a difficult choice. Some may choose to bring the players with the lowest scoring averages, or those who have performed best in the practices leading up to the tournament. Ideally, performance on the holes played in practice weighs heavily in the coach's decision, but in the condensed fall season, a more nuanced solution is required.

Often in the fall, the team is only able to play two holes of golf in practice, if any. When that happens, Weeks looks to the previous tournament's scores, which factor largely into her decision. Beyond the score, it is often easier for a player who has been traveling to continue competing.

But there are other factors as well. For example, the tournament's course plays a large role is Weeks's choice. "Sometimes I pick players because of their ability to hit a certain distance," she said. "Sometimes different courses favor different styles."

For example, Yale's famously difficult ninth hole requires a special skill set. It has a 65-yard deep green and requires at least a 190-yard long hit to carry the ball to the green over a water trap. For such a course, Weeks might choose players who can target the ball well.

But even with all the information Weeks has about her golfers, it can still be a matter of gut instinct. "Sometimes I do make decisions based on hunches," she said.

The arbitrary nature of the selection process, while unavoidable, can still cause anxiety in the players. "It can be stressful," admitted Mocio. "But for me as a senior, I'm used to it by now. You really just always have to keep working hard and give it your best go."