As a new voice takes over women's basketball, the message of family stays the same

As a new voice takes over women's basketball, the message of family stays the same 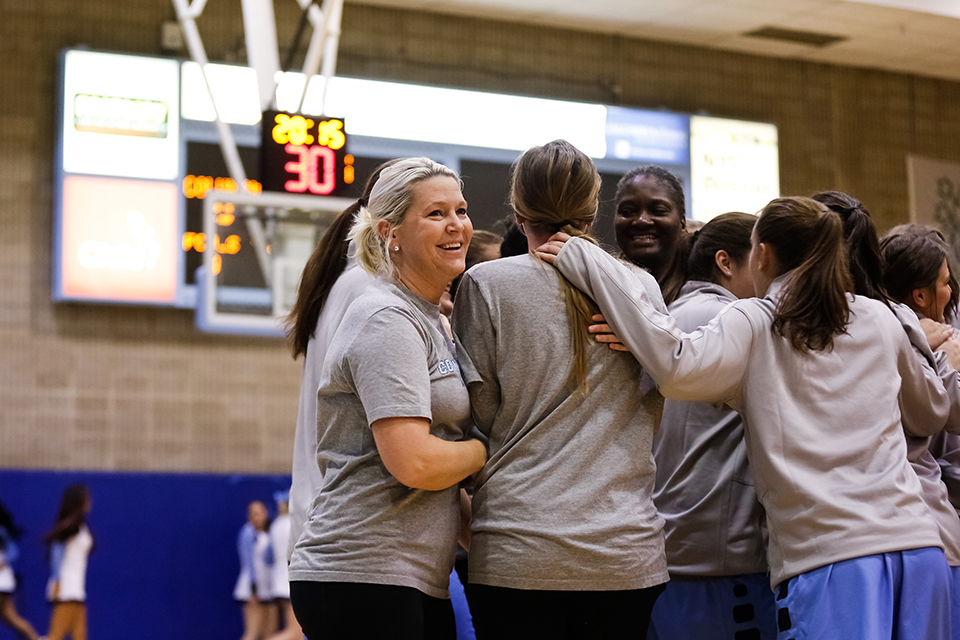 Head coach Sheila Roux took over after Stephanie Glance left the helm only months ago.

After a nearly three-hour practice on Monday night, the women's basketball team came together in a huddle. After a few moments the team broke apart—and at the center, furiously scribbling notes in a small notebook, was new interim head coach Sheila Roux.

While the coach calling the plays may have changed, the foundations left by former head coach Stephanie Glance will remain.

"I could write a novel on all the things I've learned from coach Glance … and because we've worked for so long, we have the same philosophies," Roux said. "It's the same expectations, it's the same goals … It's just a different voice."

From the intimate circle the team forms, the open and close practices, the high frequency of high fives after good plays, to the supportive language after bad moments, the Lions are first and foremost a family, one thing Glance made sure to emphasize while at Columbia.

"There's still this family-type vibe we always had under coach Glance," Roux said.

Oliver said that the similarities between Roux and Glance's coaching styles are readily apparent, and that how practices are run and pregame routines have remained the same.

However, Roux does do one thing a little bit differently.

When Glance joined the Columbia program in 2013, she added Roux to her staff as the assistant coach and recruiting coordinator. The coaches had previously worked together at Illinois State for three years.

"I learned a lot about relationships and how you can still have high expectations and hold people accountable without having to demean or degrade," Roux said. "We are not screamers and yellers. We want to teach life lessons through basketball."

After Roux's first few seasons with the Light Blue, she was named associate head coach. In that role, she began to form close relationships with many of the players on the current team. These relationships continue to develop now that Roux has assumed the head coaching position.

"It is a bit different now because she was an assistant coach, and as a head coach you see her take more of an authoritative role," junior forward Tori Oliver said.

The team has embraced the way Roux has come into the role.

"As an assistant, she was mainly working with the guards—now she has to make sure she is viewing the team as a whole," junior forward Devon Roeper said. "She's been doing a very good job with that."

Roux takes over at a crucial moment for the program. With a strong recruiting class and two of the top players in the Ivy League in Oliver and sophomore forward Camille Zimmerman returning to the team, the pressure to perform could not be higher.

Roux believes the team is more than prepared to handle the challenges from Ivy League competitors.

"I like that we have more options this year, more offensive weapons, and that we are a lot deeper," she said.