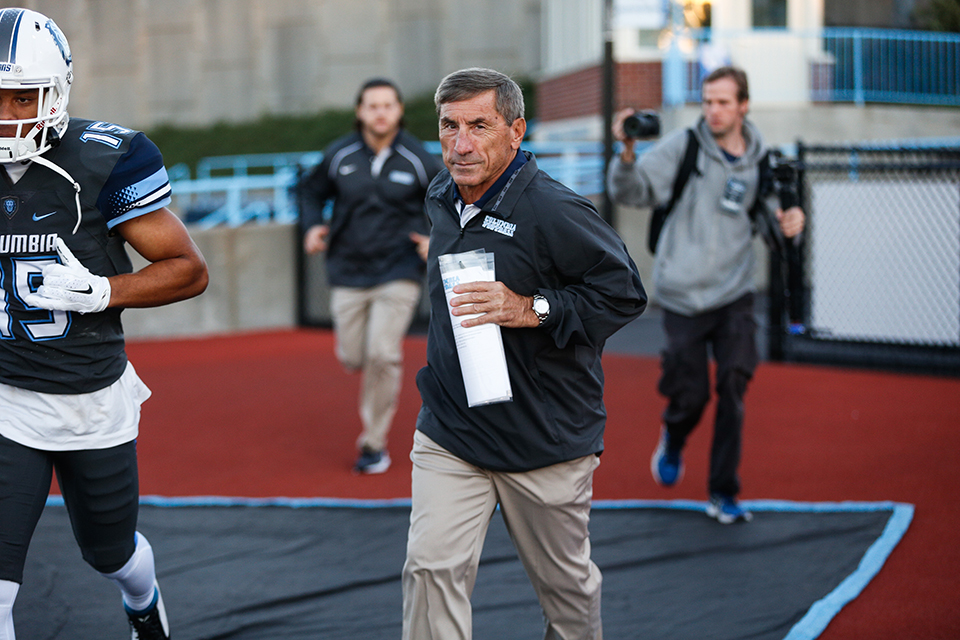 Al Bagnoli is no stranger to the world of recruiting.

Football head coach Al Bagnoli is a busy man—his first season at the helm of the Light Blue ended three weeks ago, but the 23-year Ivy League veteran is deep into his next recruiting campaign. Last week, Bagnoli was already midway through a "Southern swing," pursuing top prospects across America's heartland of football.

Tackling an ambitious schedule, on Wednesday, he visited potential recruits in Austin and Dallas before driving three and a half hours south to Houston, where he spent the day Thursday. He wastes little time on these trips, advancing on to New Orleans and Atlanta, where he will spend a day apiece, before returning to New York.

In all, the five-city tour will cover well over 3000 miles and will hit several known football hotbeds, including Westlake High School in Austin and Coppell High in Dallas. The scouting trip has targeted students with offers from Big 12 schools, Armed Forces academies, and a slew of Mid-Majors. This recruiting race has already provided a run-in with a coach from a prolific BCS bowl contender.

If it seems like Bagnoli is shooting for the stars, it's because he is.

"If you recruit the right kid, they'll have different options."

Bagnoli doesn't scare easily. Throughout his career, he has gone after top high school performers despite competition from more high-profile programs. Near the end of his coaching career at Penn, he lured standout wide receiver Justin Watson to the Quakers. Watson was ranked within the nation's top 100 receivers by 247sports.com and had attention from a number of schools, including FCS hegemon Villanova.

However, Watson committed to the Quakers and, as a sophomore, led the Ivy League last year with 108.2 yards per game. The wide receiver is what Bagnoli calls a "Pac-12 scholarship-type" player, one of many who have ended up at Penn over his 23 years as head coach. This title, though somewhat arbitrary, speaks to the success of the recruiting effort.

Bagnoli knows firsthand how hard it is to convince a recruit to choose Columbia over a program like USC or UCLA, but he believes it's possible.

"You're going to have to fight for them," he said.

One such recruit was the focus of Bagnoli's recent trip to Westlake (NCAA regulations prohibit Bagnoli from naming the player). The high school senior also has interest from FBS schools Air Force Academy and Kansas, FCS schools Georgetown and Davidson, and the rest of the Ivy League.

As he left another high school, Bagnoli recalls running into Chad Morris, head coach of SMU. While the Mustangs have suffered a recent stretch of losing seasons, it is still the same team that won three bowl games in the past six years. Known for its highly touted program, SMU is a natural top choice for recruits.

Bagnoli knows that his work is cut out for him in luring top talent to Morningside Heights .

Something peculiar happened in Dallas, Bagnoli explained. While visiting other recruits on his wish list, he learned that Yale's coach Tony Reno had just left the same high school. Representatives from Georgetown and Davidson were due to visit next.

Yale and Georgetown, which both played Columbia this past year, were clearly on the same page as the Lions.

"None of these schools are within 1500 miles of Dallas," Bagnoli laughed. "But four different schools were here to see the same two kids. On the same day. At the same time."

While this coincidence was particularly bizarre, the situation reflects the new standard for recruiting, in the Ivy League and beyond. The entire Ancient Eight—along with comparable schools such as Georgetown and Davidson—set their sights on elite players who can meet the academic requirements.

"There's certainly not an unlimited number of these kids," he said, "There's a tremendous amount of competition."

And the competition has only increased in the last decade.

At the start of his career at Penn, Bagnoli recalls, each school pursued leads they had developed through personal connections to high school coaches or players. But the emergence and increasing ubiquity of video recruiting services, such as Hudl.com, have revolutionized the process of identifying top prospects.

Hudl allows players to create a player profile to share film and stats with college coaches online. This has changed the process enormously—coaches no longer need personal connections to find their top choices. Instead, the players come to them, en masse.

"Once upon a time, they [recruits] had to actually send the hard copy [of film]. They weren't going to send out 60 different tapes to 60 different schools," Bagnoli said.

Now, they just press a button, and coaches fly across the country to see them.

"It's tough, because you can't hide anybody anymore," Bagnoli said.

The Lions' decade-long stretch of futility has created a perception—among some of the team's supporters and media—that Columbia is not an entirely 'serious' program. A 5-35 record over the past four years combined with certain anemic performances have bolstered this image.

From a recruiting standpoint, this has led some to assume that Columbia has no business competing with proven programs to sign skilled high schoolers.

In fact, Columbia utilizes the same basic operations as most other FCS schools. Each of the 10 coaches on staff is assigned a different part of the country. They scour websites such as Hudl, visit tournaments, and follow up on tips.

Suggestions work their way through a hierarchy, until they get to Bagnoli. That's when the head coach hits the road to evaluate them in person.

While the model is nothing extraordinary nationally, it's a fully concerted effort. The staff members set the bar high, and they work for it. It's important to remember that Columbia is in the same league as many schools which attract blue chip recruits.

Is Columbia an elite program? Certainly not. But under Bagnoli, it has become a very serious program—at least when it comes to recruiting.

Penn and Columbia share an important distinction among the eight schools of the Ivy League: both are located in the middle of large cities, surrounded by skyscrapers and public transit—a far cry from the pastures around Cornell's Ithaca or Dartmouth's Hanover.

This similarity has kept Bagnoli's transition pretty simple. "In terms of recruiting, it's the same blueprint," he said. The final decision for athletes often comes down to the parents who guide their sons through the process. Sometimes, the urban location can be a disincentive for parents nervous about safety.

"There's always that question mark in the back of mom's head: Where am I sending my kid to?" Bagnoli said. "But she's got no concern sending the kid to Hanover."

Bagnoli has shaped his efforts at both schools to respond to this apprehension. More than most coaches, he places substantial value on the parents' visits to campus. While wooing a the recruit is obviously crucial, making a parent feel comfortable, he explains, often makes the difference between a 'yes' or a 'no.'

The draw of the big city

Penn and Columbia, for all their similarities, have wildly divergent program histories. Under Bagnoli, the Quakers garnered nine Ivy League championships. The Lions, on the other hand, have none in the 21st century, and only one championship in its history, dating back to 1961.

As he attempts to win recruits over elite programs and Ancient Eight schools alike, Bagnoli acknowledges that the lack of past success makes his job in Morningside Heights a little trickier.

But he insists that the pitch to join the Light Blue nevertheless practically writes itself.

Bagnoli plays up the benefits of Columbia by carving out a spot for the Light Blue as one of the best overall student experiences of the conference. "There's eight great schools," he said, "But we're certainly on the upper echelon of great schools in our league."

He justifies much of this standard academically, citing Columbia's top-tier classroom experience. But he also plays up the value of attending school in New York. The draw of the big city sparks interest in many small-town high schoolers, and Bagnoli seizes on this desire.

"You can't find it in Cambridge, in Princeton, in Ithaca, in Hanover," he tells them. "You just can't find it—it's not only great facilities, great institution, and a fresh start. It's also having New York out your back door."

There remains an intangible feeling that football belongs in Philly. In addition to Penn's history of Ivy excellence, the Quakers home turf—Franklin Field—is the old home of the NFL Philadelphia Eagles. There's a history there that seems to drive recruits.

Bagnoli is the first to acknowledge that the same feeling doesn't exist at Baker Field. "One of the things you can't sell is that we don't have tremendous tradition and history," he said.

But that's the thing about history: it is constantly being written.

"We don't have it now," Bagnoli said."It's something that we're trying to make."