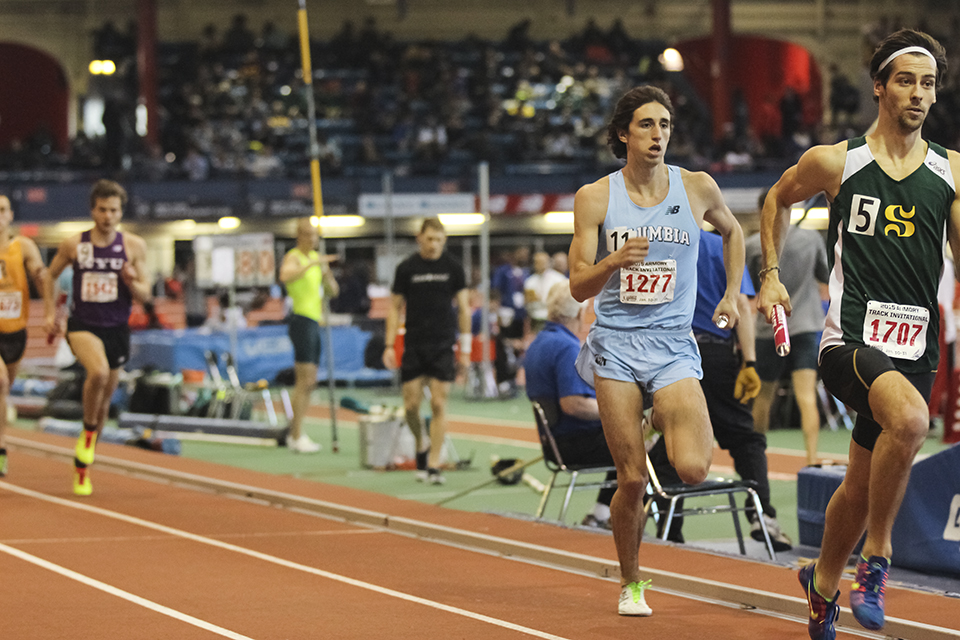 Men's track and field looks to reach the top of the Ivy League with a revised approach to recruiting.

Men's cross country recently celebrated its second Ivy title in three years, but the Lions' history of success in the fall had long come at the expense of the track and field program.

Head coach Dan Ireland presides over both sports for the men and women, meaning he oversees six different teams at Columbia (cross country, indoor track and field, and outdoor track and field). And clearly, it has been a difficult task to find success with every squad.

Wood targeted long distance runners during his tenure, primarily recruiting 5k and 8k runners, but he neglected sprinters and field specialists. The strain on track and field was clear: The Lions finished in the bottom half of the Ivy League 18 of the last 20 years with eight last-place finishes.

But after two decades of program imbalance, second-year head coach Dan Ireland is ready to right the ship.

It represents only a slight improvement from last year's roster, when 47 distance and mid-distance competed for Columbia versus just one specialist.

Consider that defending Ivy champion Princeton boasted just 26 distance and mid-distance runners a year ago with a staggering 19 specialists.

Columbia paid the price last season at the indoor Ivy league Championships, finishing seventh and over 100 points behind Princeton. The Light Blue also didn't feature a single representative in any of the field or jumping events. Senior Chancelor Griffin, the Lions' only jumper, missed the competition due to injury.

"He's like 'OK, we can win the conference in cross [country]. ... I'm going to bring in 15 cross [country] runners, I don't care if we have any track kids,'" Ireland said of his predecessor Wood's approach.

As Ireland later explained, Wood preferred to finish 1st in cross country, 4th in indoor track, and 8th in outdoor, as opposed to 6th in all three.

Quality, not quantity
Seeking a more balanced roster, Ireland has looked to emulate other top Ivy programs such as Princeton.

"Now, we've gotten to where we're good, and we can go do Princeton's model," he said. "We don't need 15 'B-level' kids. We can take six 'A-level' kids, and that's all you need. And that's what Princeton does—it spreads it out."

Ireland's recruiting strategy allows for more athletes to compete in an event. In the past, Columbia could not accommodate all of its distance runners for a single track and field competition.

"You can go to a cross country meet and race them all," Ireland said. "But you go to a track meet and you're limited to four people per event, and half of your guys aren't racing, and that's not a good situation for them."

Conquering the field
With three more competitors for field events this season, Ireland has even more ambitious plans for 2016-17. He explained that the class of 2020 includes eight distance runners and eight track athletes.

However, Ireland is quick to highlight the difficulties in recruiting non-distance runners. Men's track and field carries the burden of a poor reputation from Wood's tenure in Morningside Heights. Moreover, Columbia lacks a training facility on campus, so athletes must travel to the The Armory for practice.

"You don't necessarily need depth in those [field] events, you just need high quality," assistant coach Benjamin Waruch said. "Recruiting the kids that are high quality that can contribute all four years here or three years is really what you're looking for."

An example on campus
Ireland is quick to express his admiration for his women's squad, which shined in all three seasons last year. Having inherited a squad with ample balance and talent, Ireland led Columbia to third-place finishes in cross country and outdoor track, along with a second-place finish in indoor track.

But Ireland reveals that the men's squad will opt for a different approach, without the elite jumping and sprinting units of the women's squad.

"Now we'll have somewhat of a presence in the field events: a pole vaulter, three long jumpers, and a triple jumper at least," he said. "It helps us more going forward—we can recruit kids now that we have people in those event areas."

An earlier version of this article stated that cross country and track and field were part of one program, but the two sports make up six different teams overseen by coach Ireland. Spectator regrets the error.