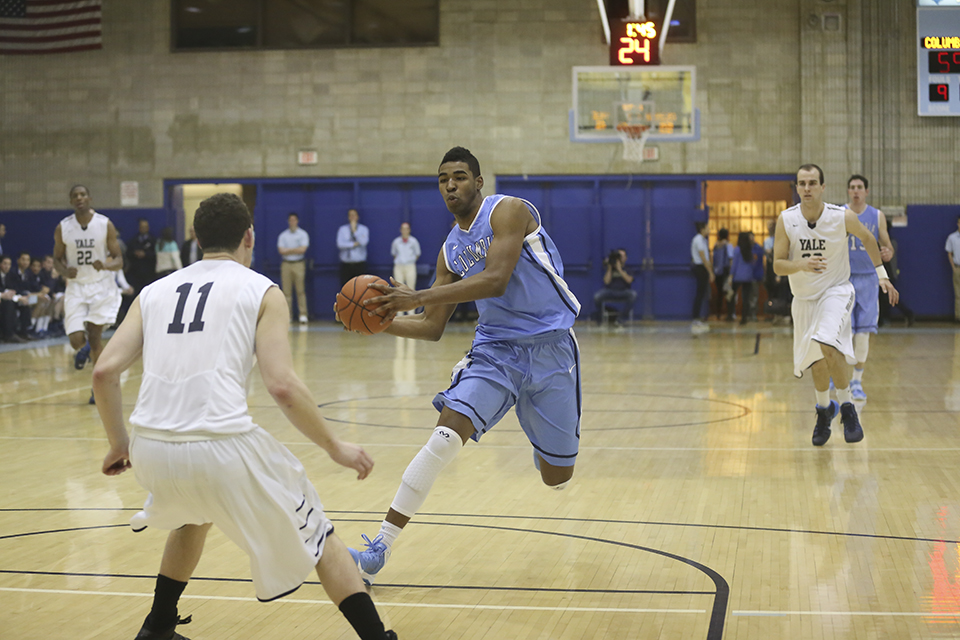 Junior forward Jeff Coby had 13 points and 11 rebounds in the victory over Cornell, earning the third double-double of his career.

Jeff Coby made three free throws and corralled a vital rebound in the final six seconds to grab the headlines, but Grant Mullins' late foul was just as important in a 74-70 win over Cornell on Saturday evening at Levien Gymnasium.

As Columbia led 72-69 with 2.2 seconds left, Mullins sent Cornell guard Matt Morgan to the charity stripe for two shots, barring the Big Red from tying the game with a three-pointer. Morgan made the first free throw, but intentionally missing the second one, hoping that the Big Red could secure the rebound and then grab a quick score.

Coby was the first to secure the board on a night when his energy was a massive reason behind the Lions' victory. The junior forward finished with 13 points and 11 rebound for his third career double-double.

"Everyone was trying to box out and keep a close eye on me because I'm always going to the glass, trying to do the little things," Coby said. "[Senior guard] Isaac [Cohen], when I was checking into the game, he told me, 'do anything possible to get the energy up.'"

But Cornell (7-8, 0-1 Ivy) responded with a furious rally to trim the deficit to 71-69 with 16 seconds remaining, as guard Matt Morgan connected on a three-pointer from way downtown. He finished with 29 points on 10-for-23 shooting on the evening, but it was the free throw he didn't make that proved to be the difference.

"This was the first time we've seen him," Smith said. "We've got to play him seven more times, and he's obviously a good player, so he might draw that kind of attention [double-teams]."

Senior guard Maodo Lo added 12 points—eight in the second half—to wake up the Lions from an earlier second-half lull.

Cornell had snatched the 55-53 advantage with 10:08 left in the game, its first lead in over 20 minutes of action. But Lo first responded with a three-pointer from the right wing—his first of the evening—with 7:38 left. Fellow senior guard Grant Mullins then made a layup before Lo made another three-pointer, and soon Columbia led 66-59 with 5:49 left.

The Lions' lead swelled to 11 points with 3:51 to play behind a stellar night from the charity stripe. The Light Blue shot 23-for-29 from the line, buoyed by Coby's 7-for-10 performance, including those three clutch free throws to begin the 14-game tournament on a bright note.

Columbia entered the game with a slew of injuries, headlined by senior forward Alex Rosenberg, senior guard Isaac Cohen, and first-year forward Lukas Meisner. But Rosenberg shined in the first half for the Light Blue, coming off the bench to score seven points on 3-for-5 shooting and stifle Cornell's early pressure.

"It felt good to help the team to win because when you're on the bench you can't do anything," Rosenberg said. "But when you're on the court you can try to have more an effect. So being back out there with the teammates and everybody felt great."

Morgan answered time and again from beyond the arc, making five of Cornell's 10 three-pointers on the night. But without leading scorer Robert Hatter, who sat courtside sporting a boot on his sprained right ankle, the Lions pulled ahead by nine with 4:41 left in the half.

The Lions did not make another field goal until sophomore guard Kyle Castlin's layup with 1:22 to go, constantly harassed by Cornell's defensive pressure. The Big Red seized the opportunity courtesy of some hot shooting from outside, as they narrowed Columbia's lead to just 40-36 at halftime.

And while Columbia opened the second period with a three-minute drought from the field, it did not prove costly in the end, as the Lions have now won seven of their last eight games.