Behind the facemask: how Ivy League football is tackling concussions

Behind the facemask: how Ivy League football is tackling concussions 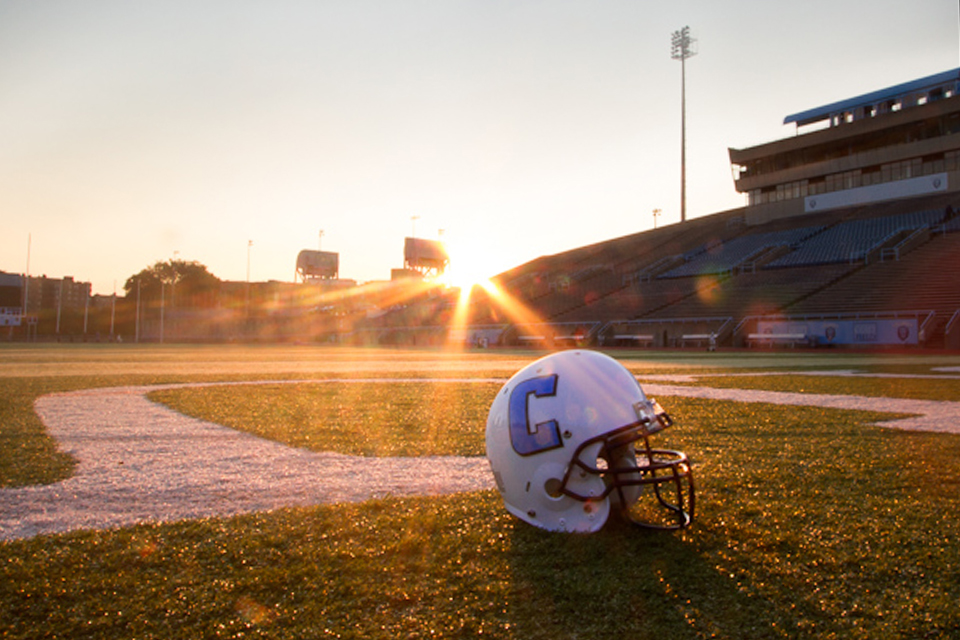 The Ivy Leagues Ad Hoc Committee on Concussions has set new protocols in an effort to limit head injuries.

One thing that President Barack Obama and NFL Hall of Fame tight end Mike Ditka have in common is that neither would want their sons to play football.

Both men are speaking hypothetically, but they illuminate the most vexing problem for any football fan nationwide: As television ratings and broadcasting rights continue to soar, football's present looks to be rather secure. But the same cannot be said about its future, with the heightened concern over whether or not playing football is inherently dangerous.

The propensity for football players to suffer head injuries—and multiple, at that—has received increased media attention and scrutiny over the past few years.

The NFL Players' Association (NFLPA) sued the NFL in 2011 alleging that it withheld information linking the sport to long-term mental problems. The case is still pending, despite reaching a temporary settlement in 2013 for the NFL to pay the NFLPA $765 million.

But Columbia football head coach Al Bagnoli believes that the approach to treating concussions has improved, as the responsibility for handling all potential head injuries has shifted from the coaches to the team's trainers.

"We, as coaches, stay out of the medical diagnosis, and we worry about when the kid will be back and how long it will take. But that's left up to our medical people," Bagnoli said.

Part of the change in treatment for concussions is a result of innovations in head trauma research, highlighted by Dr. Ann McKie's work at the Boston University School of Medicine. Over the course of the last decade, the ways in which concussions have been classified have changed dramatically.

Physicians used to evaluate concussions on a very simplistic scale ranging from mild to severe. But these same doctors are now checking for 22 possible symptoms—some of which may even seem banal—that could suggest that a player has a concussion. For example, nausea, sensitivity to light or noise, feelings of  fogginess or slowness, and involuntary emotional reactions such as uncontrollable laughter or crying are potential symptoms.

"You can have other individuals who are completely alert, completely oriented, but can have a significant amount of symptoms," Harvard Head Athletic trainer Brant Berkstresser said.

These new evaluation protocols are, in large part, a reaction to increased evidence of the frequency and severity of concussions at all levels of football, including in the NFL. As the professional ranks have improved the standards of assessment, prevention, and treatment of concussions, other levels have followed suit.

In January of 2010—around the same time the NFL took action against head injuries—Ivy League Commissioner Robin Harris expressed her desire to investigate concussions in a meeting with each of the Ancient Eight's head athletic trainers.

It was then that the Ivy League's Ad Hoc Committee on Concussions was formed.

The committee's first goal was to minimize the number of sub-concussive hits—routine helmet-to-helmet contact that doesn't result in immediate injury—that a player sustains in a year. Subsequent legislation accomplished that goal, reducing the numbers of practices overall along with the number of full-contact practices.

"Restrictions [are] on the number of double-sessions, what can be done in these double-sessions, number of contact practices in the spring and preseason," Bagnoli said of the new protocols. "Which is radically different than the '70s, when you would go triples and hit as much as you want for three weeks."

As a result of the committee's work, the Ivy League became the first conference to reduce the number of team practices in 2011. Two years later, the PAC-12—and ultimately most of the other major Division I conferences—followed suit.

But the Ivy League's commitment to combatting potential head injuries extends beyond the Ad Hoc Concussion Committee. The Ancient Eight also collaborates with the Big Ten on an epidemiological study to better understand head injuries. The clinicians leading the study hope to use the data to improve their clinical management plans for student-athletes.

"We started looking at retrospective data, essentially going to the athletic trainers in key positions and asking them to provide us with the number of concussions by sport using their records," Carolyn Campbell-McGovern, second in command at the Ancient Eight's League Office, said.

Campbell-McGovern partnered with Commissioner Harris and sought out Big Ten administrators for a joint-epidemiological study, hoping to take advantage of twice as many data points.

But the harsh reality is that student-athletes must sustain head injuries in order for data points to accumulate.

"We don't want to wish concussions on anyone," Campbell-McGovern said. "But we know that they are going to happen, and so we want to make sure that we're capturing the mechanism of injury."

Each head injury can be represented by 42 data points, which highlight variables such as the precise field location of the injury, the injured player's position, and the implement of the concussion (for example, a knee or a helmet to the head).

The study's administrators ultimately hope their work will allow trainers to better treat concussions. And while Campbell-McGovern explained that she has begun to spot trends, the clinicians lack sufficient data to suggest any further changes.

"We really don't have enough data to make any real conclusions," Campbell-McGovern said. "We're using [what we have] to see if we can identify any patterns from our discussions with coaches about whether there are ways to make practice safer."

For its part on the issue of head trauma, Columbia has its own concussion experts on staff. Head Athletic Trainer Jim Gossett has coordinated healthcare for Columbia student-athletes since 1984.

When dealing with concussions in the Ivy League, Gossett explained, trainers must keep improving their ability to identify injuries, given that each concussion requires a different recovery protocol.

He added that, in the Ivy League, the biggest challenge is ensuring that players are self-reporting.

"Maybe you sustained an injury, and the next day is a day off," Gossett said. "Maybe you say, 'I've got a little headache' or whatever, so it might not be until the second or third day that you say, 'Listen, this happened a few days ago, but I still don't feel right.'"

In addition to his duties at Columbia, Gossett serves as a concussion spotter for the NFL, tasked with recognizing concussions from the press box at New York Jets games.

Although he declined to give specifics about his NFL duties to Spectator, Gossett told the New York Times in 2014 that he is responsible for alerting the medical staff on the sideline whenever a player appears to be exhibiting any concussion symptoms.

"He takes a lot of the things that he's learned from that aspect of it and finds applications with our teams and our programs, specifically with football," Pilling said in an interview last fall.

Gossett, however, believes that his top priority with respect to head injuries is to keep student-athletes in the classroom.

"If you can't think, you can't be in class," he said. "Really, my number one goal is to get them back in class as quickly as possible then getting them back on the court or field,"

Another advantage for the team is Gossett's personal relationships with the student-athletes, which can make diagnosing a concussion a little bit easier.

"Just by the way they look, you can tell someone's not what they normally appear to be," he said.

Gossett and other Ivy League trainers are looking to new innovations not only to aid in concussion diagnosis, but also to limit their occurrences in the first place.

One of these developments has been re-teaching old tackling techniques, but Gossett is adamant that those tackling methods turned players into human spears.

"There was no wrapping up, using the shoulders, or coming in a little bit lower. I think that's why you're seeing some of the rule changes," he said.

Another new frontier for the Ivy League's Ad Hoc Committee on Concussions is the possibility of moving the kickoff farther forward on the field. In 2012, the NCAA moved the kickoff from the 30-yard line to the 35-yard line in order to increase the number of touchbacks, reducing the number of collisions.

But according to Berkstresser and Gossett, that five-yard change hasn't significantly changed the number of touchbacks in the Ancient Eight, as most Ivy kickers lacking sufficient leg strength to kick the ball deep into the endzone.

It's a problem that prompted Gossett to suggest the Ivy League should eliminate kickoffs altogether.

Ultimately, the aim of this focus on concussions is to predict a player's likelihood of suffering concussions. According to Gossett, this requires knowledge of key biomarkers in a person's DNA that may make them more susceptible to head injuries. If athletes and their parents were able to identify those biomarkers, they could make a more informed decision about which sport to play.

Innovations in this field could be the key to avoiding Chronic Traumatic Encephalopathy, a condition that results from a large number of sub-concussive hits over a longer period of time. The repeated hits ultimately lead to the development of progressive tau proteins, causing symptoms similar to those of dementia.

But it is still uncertain how CTE can be prevented—doctors cannot diagnose CTE until they conduct an autopsy, which leaves a lot of unknowns surrounding the nature condition.

Berkstresser said that certain case studies have elevated CTE into the media spotlight, but that some of those studies have flaws, including a lack of control groups or independent blind assessment. He added that due to some sensationalism, there has been an unintended consequence of an incorrect perception of causation.

"All of the studies at this point have been case studies with high selection bias and low quality of evidence," Berkstresser wrote in an email. "The scientific community needs to develop some 'experimental design' to better understand CTE."

Despite the concussion crisis, most coaches, trainers, and administrators seem to think that football's popularity across the nation is secure.

"It's still extremely popular," Berkstresser said. "It still has the highest television ratings almost every week."

The consequences of a violent game haven't yet made a significant impact on its fans, but for those who can read a brain scan best, the long term dangers of playing football outweigh its benefits.

Bagnoli expects trainers and administrators to continue to find more ways to reduce the number—and severity—of hits to players. It's why Bagnoli, who has worked in college football since 1975, pauses and then utters:

"We're headed for a safer game."