The men of women's basketball

The men of women's basketball 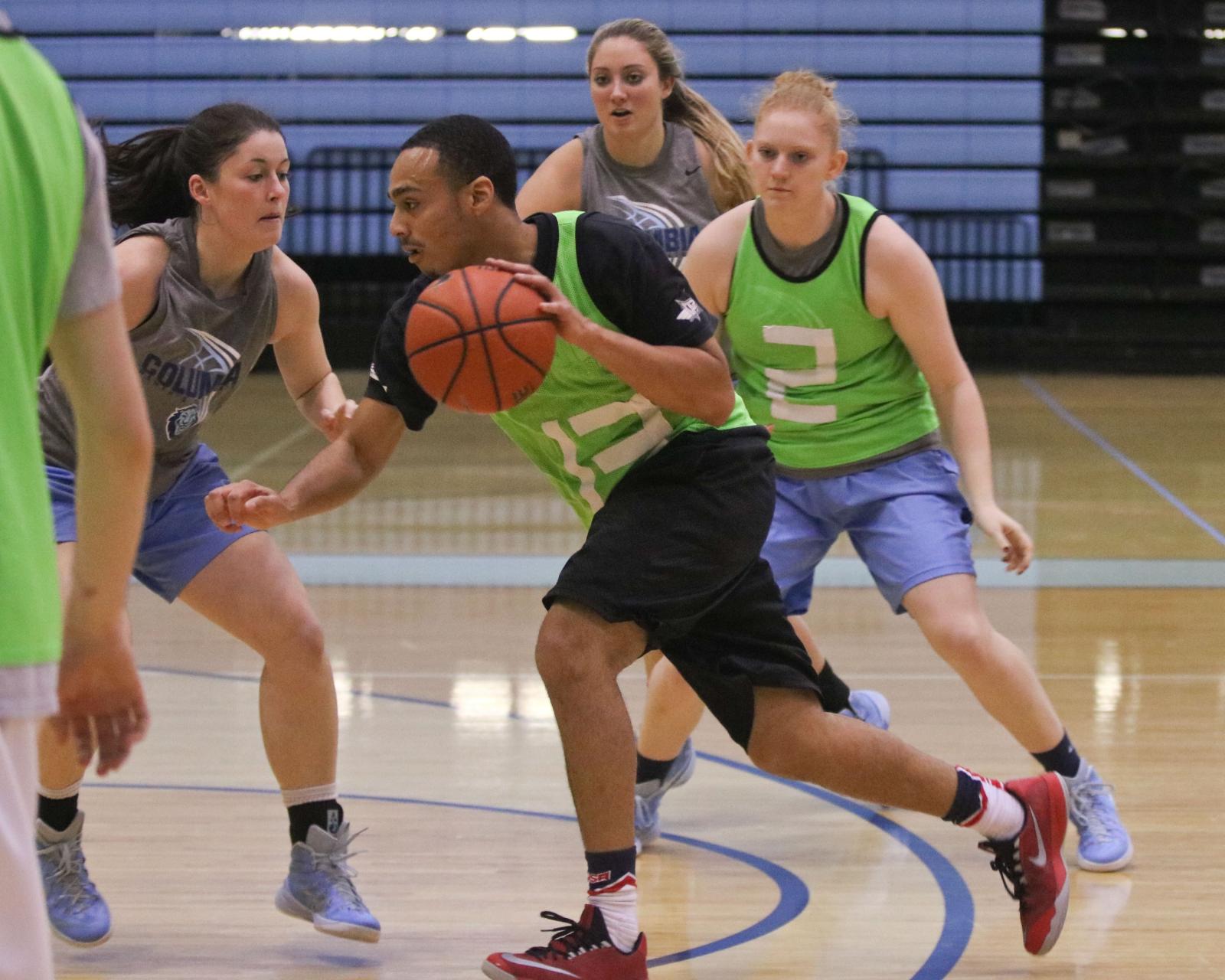 Stanley Brown, SEAS '17, drives to the basket against sophomore Kathleen Ryan during a scrimmage.

Ahead of the weekend game against Rhode Island on Dec. 12, Smith found himself playing the role of the Rams' leading scorer Charise Wilson. With a step of room, he let loose a shot.

It clanked off the rim, but Roux did not berate Smith, one of seven male students that regularly practice with the squad.

Instead, she turned to the female defender, part of the official roster, and bellowed: "She's going to be a lights-out shooter. You have to be on her."

At first, it was a bit of an odd sight.

Five other men played with Smith on the scout offense that day, and it was Zach Krueger, CC '16,  who fed Smith the shot. Each wore a sweat-soaked practice jersey with a different Rhode Island starter's number marked on the front in masking tape.

The scrimmage initially seemed like a "battle-of-the-sexes" pick-up game, but it became clear that the men played by a different set of rules: They didn't foul, they passed around the arc—almost excessively—and they followed the word-for-word instructions of Roux.

This "practice squad"—the group's official designation—devotes two to three practices per week to the team.

To the casual observer, it appears to be an innovative approach from Columbia. But many women's teams recognize the value of practicing against men, who usually offer a more demanding physical test.

The Lions began utilizing the all-male squad years ago, and this season, assistant coach Trena Trice-Hill once again scoured the campus for athletic guys willing to commit enough time.

Trice-Hill was tasked with recruiting the entire practice squad, most of whom had previously played in her PE basketball class. She scouted the other male students, who entered the fold with varying levels of basketball experience, from intramurals or open gym sessions.

"My last year of real basketball was seventh grade," Chris Beltrone, CC '18, laughed. "It's nice to get back into it. It's been very nostalgic."

Beltrone quipped that most of the basketball jargon sail over their heads.

"They talk about things that I don't understand entirely, like flares or certain cuts," Beltrone admitted. "We barely know what this stuff means, but we're following orders—we're learning."

But the steep learning curve hasn't stopped the practice squad from stealing the spotlight at times. One example in practice came when Stanley Brown, SEAS '17, a two-year veteran of the practice squad, swatted a lazy pass out of the air. He couldn't help a goofy grin.

"They get embarrassed the most when we get blocks or steals," he joked. "Roux makes them [the girls] run for it."

He added that the male practice squad doesn't have to run lines—that would be a deal-breaker.

But Brown noted that even the women's team has run fewer suicides this year, a reflection of the improvement of Columbia's play in 2015-16.

The Lions (11-5, 0-1 Ivy) already have the third-most wins in program history, and still have 13 more conference games remaining. For the practice squad, the team's success has been rewarding.

"This year, they're having a really strong start," Smith says. "It's nice to see that all the work we're putting in is translating to some victories for the team."

Brown admitted that the time commitment is significant, and that he is still waiting for team gear, which had been promised to the practice squad in return for their help. Nevertheless, he believes that the broader experience outweighs the benefits of official women's basketball paraphernalia.

"[The players] sometimes show us more thanks and gratitude than even the coaches, because we're helping them directly," Brown said appreciatively.

Beltrone echoed those sentiments, emphasizing the strong relationship between the two groups.

"We wouldn't be here if we didn't love the game, and love helping them improve."

While Columbia ultimately lost to Rhode Island 57-56 in the final minutes, Wilson only went 2-for-10 from behind the arc.

Perhaps Smith deserves some credit for that.