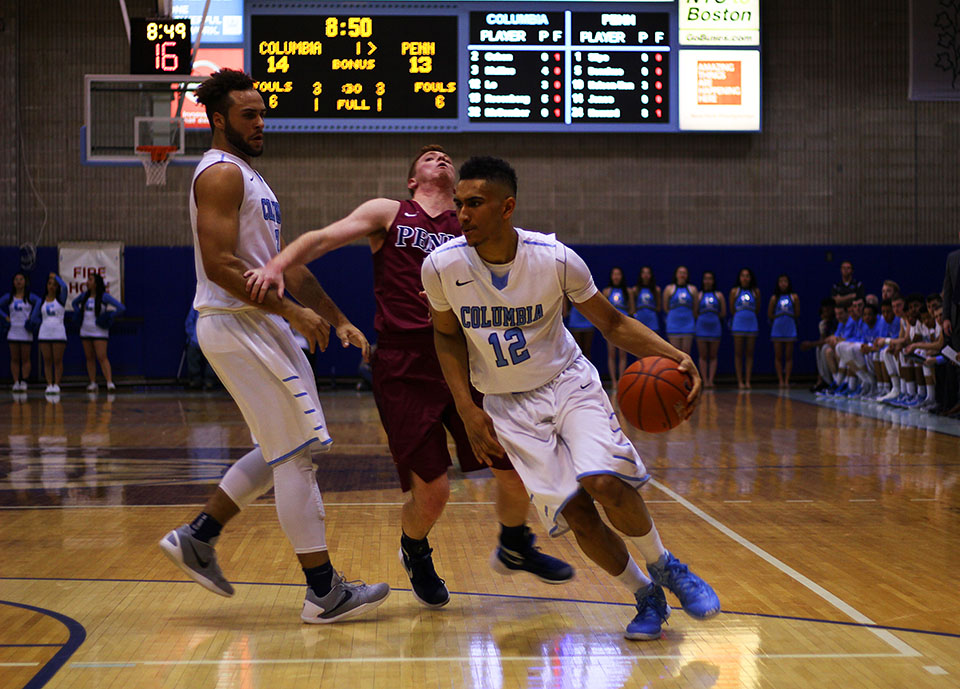 Senior guard Maodo Lo led the way in a 63-53 home win over Penn on Friday evening, as men's basketball returned to Levien Gymnasium for the first time in nearly a month.

The Berlin native finished with a game-high 21 points on 4-for-8 shooting from three-point land, ensuring that the Lions kept pace with first-place Yale (16-5, 7-0 Ivy), which won 75-65 in Hanover on Friday.

Columbia (17-7, 6-1 Ivy) still sits alone in second place in the Ancient Eight, the beneficiary of a second-half surge midway from Lo and junior forward Jeff Coby.

The junior forward added a thunderous block in the final minutes to cap the victory, as he tallied nine points and six rebounds on the evening. He also helped to stymie Penn star center Darien Nelson-Henry, who only shot 4-for-12 from the field.

A noticeably bleak spot for Columbia came at the foul line, despite entering the contest as the second best foul-shooting team in the Ivies. The Lions shot paltry 7-for-19 for the game, with senior forward Alex Rosenberg finishing just 2-for-6 from the charity stripe.

But head coach Kyle Smith explained that he isn't too worried about his team's foul shooting woes.

"I think we'll make them," he said. "We were hopefully just a little tight tonight. They'll work on them."

Rosenberg tallied 10 points on the evening in 32 minutes, as Smith elected to start the senior forward along with senior guard Isaac Cohen, who tallied four points, three assists, and eight rebounds.

But Cohen's biggest contribution may have a tip-in over a host of Quaker defenders, making it 16-13 Columbia with 8:43 left in the first half. Senior guard Grant Mullins added seven of his eleven points in the opening period, and the Light Blue held a 28-24 lead at the half.

The Lions promptly went on a 7-0 to open the second period, with their leading swelling to 11 points with 17:45 to go.

The Quakers' Jackson Donahue made it a two-point game just a couple of minutes later, as the Lions hit another cold streak. After beginning the half shooting 3-for-5 from the field, Columbia hit only one of their next nine shots.

But as if on cue, Lo shook his defender, found some room in the paint, and finished in traffic. He added the free throw for a three-point play, giving the Lions the 41-35 advantage.

Penn battled back once again before Coby went on his own six-point run, and the Light Blue cruised to victory in front of more than 2,500 people at Levien on Friday.

"It's great to have the fan support there," Mullins said. "Our team is very mature right now so we have the same focus either way, but it's nice to be back in our gym."

The Lions are back on their homecourt tomorrow night as they host Princeton at 7 p.m.