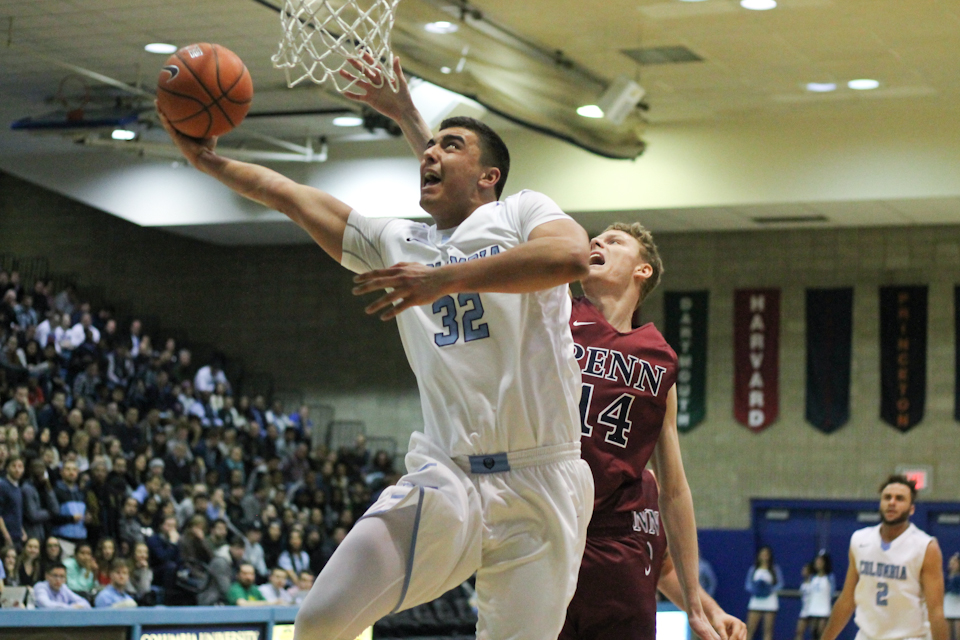 Junior forward Chris McComber will look to give Columbia a strong interior presence in its pair of home matchups this weekend.

Despite last Saturday's heartbreaking loss to Princeton, men's basketball is still firmly in the Ivy title race, but cannot afford another misstep with home contests against Harvard and Dartmouth this weekend.

The Lions (17-8, 6-2 Ivy) will host the Crimson (10-14, 2-6 Ivy) on Friday, hoping to contain forward Zena Edosomwan in a rematch of January's thrilling road win. Edosomwan, who averages 14.3 points and 10.3 boards per game, was a defensive menace in the paint in the first contest but exited the game with more than eight minutes remaining, due to injury.

In his absence, Columbia drove to the basket time and again, with senior Alex Rosenberg playing the roles of hero and offensive catalyst.

Even though the Lions played to victory in spite of a poor first half from the Lions in Cambridge, head coach Kyle Smith has told his squad to expect another hot start from the Crimson at Levien.

"It's the same way we feel about the Princeton game," Smith said. "They'll have a laser-sharp focus. They're a proud program."

The Lions will then take to the court against the Big Green in search of a season sweep.

Columbia cruised past Dartmouth (8-14, 2-6 Ivy) 77-60 in Hanover on Jan. 29, but that scoreline does not fully capture the dominant first 10 minutes from the Light Blue, which had built a 20-point lead by that point.

The Lions' first priority on the defensive end will be first-year sensation Evan Boudreaux, who has terrorized Ivy League post players with 17.5 points and 9.1 boards per game.

"I expect that Boudreaux is going through the league, and he's getting older and more experienced," Smith said. "He's going to be one of the elite guys in the league for the next three years."

Guard Miles Wright and forward Connor Boehm figure to play important roles for the Big Green on Saturday, but the Light Blue is determined to keep pace in the race to the Big Dance.

"I think we've grown a lot as the season's gone on," Smith said. "Hopefully I'm right on that. We'll find out."

The Lions hit the court against Harvard at 6 p.m. on Friday and Dartmouth 7 p.m. on Saturday.