The Machine: Brian Zabilski's run to the Pan-American Championships

The Machine: Brian Zabilski's run to the Pan-American Championships 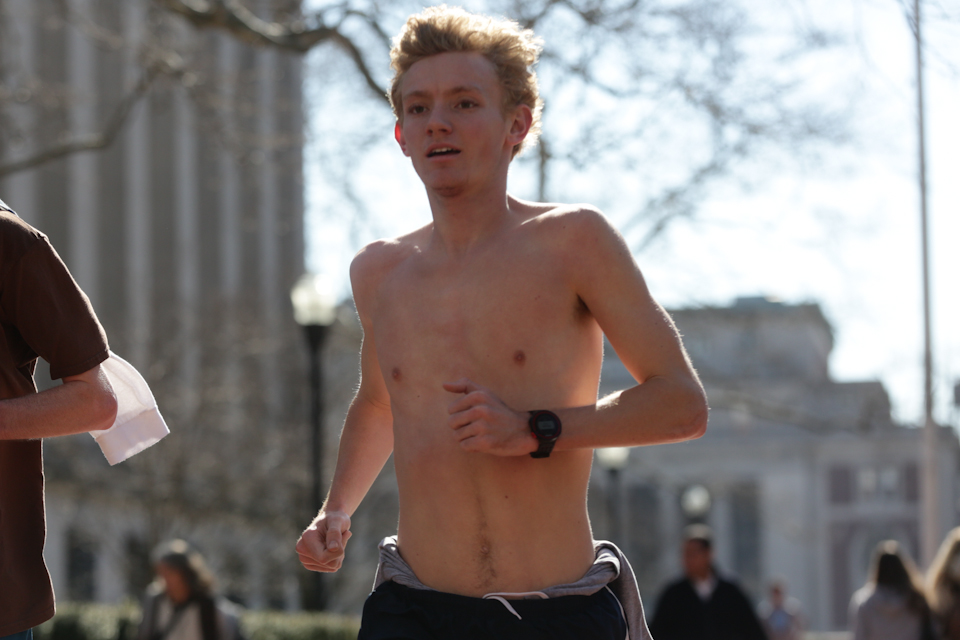 In just his first season with the Lions first-year Brian Zabilski has already made an impact. Zabilski now heads to the Pan-American Cross Country Championships as a member of the U-20 junior national team.

In the first 100 meters of the grueling 8-kilometer race at the 2016 USATF National XC Championship, he found himself at the front of a pack of some of the best young cross country runners in the country—all vying for a spot on the U.S. under-20 junior national team at the Pan American Cross Country Cup.

Leading early on hardly guarantees winning the race or even claiming one of the five qualifying spots, especially on the hilly 2-kilometer looping course in Bend, Ore.

Burning out was almost guaranteed, so strategy would be crucial.

As much as athleticism contributes to keeping up with the pace of the race, mental toughness would likely decide who would prevail in a field of some of the most talented young distance runners in the country.

But Zabilski is no stranger to high-stakes racing.

During his senior year of high school, the first-year won the Division II High School Cross Country State Championship in California with a time of 15:07.

It was his third appearance at the CIF State Championships, and Zabilski showed marked improvement with each successive year. As a sophomore, he finished in 16:30 on the 5-kilometer course.

On the track, he ran a blazing 8:49.38 personal best in the 3,200 meters a week before graduating from high school—over a minute faster than his time in the same event three years earlier.

Zabilski's improvement over his high school career stemmed largely from his work ethic, which was fostered by someone who understood the value of hard work.

At Saugus High School in Southern California, Zabilski trained under head coach Rene Paragas, who has developed one of the most successful programs in the state. Paragas has also led the girls cross country team to nine of the past 10 Division II CIF crowns.

The first-year pointed to Paragas' tough summer training schedule as the key to both his and his alma mater's success.

"My coach told me that I was going to run with somebody every single day until I died," Zabilski said of the summer training before his junior year. "And every single day, I would die a little less."

Paragas noticed Zabilski's potential early on. He said that Zabilski was nicknamed "the machine" during ninth grade because of the detailed, almost robotic nature of his training routine.

So when Zabilski went on to break a number of Saugus' school records on the track and in cross country as an upperclassman, Paragas was hardly surprised.

"It was nothing that happened overnight," the coach said. "Basically, it was the accumulation of two, two-and-a-half years of work."

Keeping up with the Pack

After his quick stint at the front of the pack, Zabilski found his place in the middle of a faster subgroup, knowing that staying at the head of the 30-man race could increase his chances at qualifying.

Feeling relaxed through the middle of the race, he said, was impossible.

"It was almost just like a mental game of the devil and the angel," he said. "[They] are on your shoulders telling you 'You feel bad. No, you feel great.' [It's] telling yourself over and over again that you can do this, you trained for this."

And Zabilski was not short on training partners leading up to the race.

By training and running with his Columbia teammates, the first-year was exposed to a breadth of experience and success. In the fall, the Light Blue cross country squad captured the Ivy League Heptagonal Championship. Zabilski ran in the Championships and finished 52nd.

"Just now going into next year, and then in the years after that, I'm 10 times more confident that I can help the team," Zabilski said of an experience he described as both "a lot of pressure and a lot of fun."

Just last weekend, he made a measurable impact on Columbia's success in the Indoor Ivy League Heptagonal Championships. Zabilski finished sixth in the 3-kilometer race and was the highest placing first-year in the event.

As the initially tight pack from the early stages of the race gradually thinned into a widely dispersed field, it was here where the race, and Zabilski's fate, would be decided.

Going into the final lap, Zabilski was positioned in sixth, in touching distance of a pair of runners. Though the top three had cemented their positions ahead of the rest of the field with a kilometer to go, it was clear that the fourth and fifth qualification spots would be highly contested.

"[With] the pack stringing out, I tried not to focus on it," the first-year said. "I kept my eyes forward. If somebody fell off, I said, 'Hey great, that's one less person I've got to worry about.'"

At first glance, cross country seems like a largely individualistic sport, and even more so in a competition like Zabilski's in which all but one of his Columbia teammates were literally on the other side of the country. Fellow first-year Tyler Italiano joined Zabilski in the field of 30, finishing 18th.

"I couldn't have done it if he hadn't done it with me," Zabilski said of his teammate.

Zabilski is quick to frame his individual accomplishments within the broader successes of his team. His work ethic seems to stem largely from a desire to better the collective whole.

He attributes his high school state championship crown to a much humbler beginning. As a sophomore, his team finished second at the meet—it was then when he decided to work even harder, with the ultimate goal of helping Saugus win the team title the following year.

In fact, Zabilski's decision to come to Columbia was largely based on the immediate connection he made with the team, passing on top running schools like Georgetown, whose men's team finished 10th at last fall's NCAA Championship.

"I think you can be 10 times more successful if you're with people who you actually care about," the first-year said. "What the team was like, what our values were, what we're really shooting for was something I fell in place with."

Getting to the Line

After battling with the angel and the demon on his shoulders during the last lap, Zabilski crossed the finish line in fifth.

"I kind of expected it. I knew that he was one of the best going in," Italiano said of his teammate. "I was confident in him."

Now the first-year finds himself heading south of the border to Caraballeda, Venezuela, as a member of the under-20 junior national team.

On Friday, the first-year will compete with the U.S. team at the Pan American Cross Country Cup, where he and his teammates will race against teams from Central and South America and Canada.

"It's going to be a new experience," Zabilski said. "But at the end of the day, it's still just a race, another day at the office pretty much."