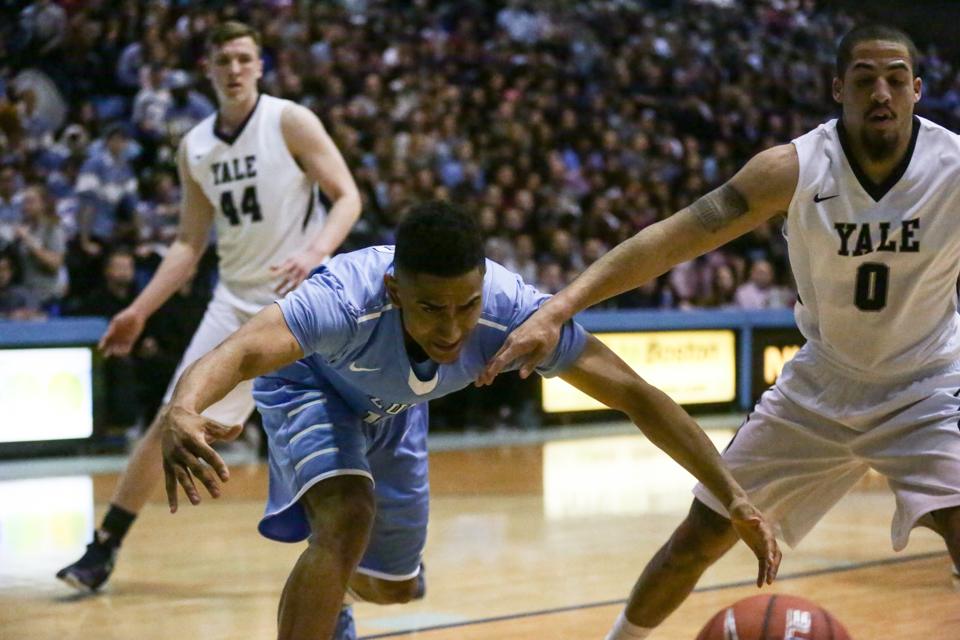 Senior guard Maodo Lo was just one of two Columbia players in double figures in the home loss to Yale.

The Lions' big-game struggles reared its ugly head once again on Saturday evening, as men's basketball fell to Yale at home 71-55.

Senior guard Maodo Lo led the way with 21 points, and senior forward Alex Rosenberg chipped in with 11 points to be the only two players in double figures on Senior Night.

"They played better than us for four games," head coach Kyle Smith said. "But it's just crazy how tight the league is. If Cannady misses a three at the buzzer or Dartmouth holds on last week when they're up two with 11 seconds, then this game could have been for a share of the lead. It's just a play here and a play there."

Sophomore guard Makai Mason was the catalyst for the Bulldogs on the night, as he scored a game-high 22 points on 9-for-18 shooting from the field to hand Yale its first Ivy title since 1962.

Time and again, Mason burned the Lions with pull-up jumpers from around the free throw line. And while senior forward Justin Sears had just four points on 2-for-8 shooting from the field, the Bulldogs still dominated the rebounding battle on the evening, 39-24.

Fellow senior forward Brandon Sherrod tallied 13 points and six rebounds, and he made his presence felt in the earlygoing en route to a 17-3 lead with 13:25 left in the half.

"He did a year of prep school, so he's like a 24-year-old senior," head coach Kyle Smith said. "They've [Yale] gone through some wars last year with the unbelievable disappointment in the last game of the season. They responded the right way. It's something for our young guys to learn from."

Columbia soon adjusted to Sherrod and Sears' early barrage of putbacks on the glass, swarming to the two big men in the interior. But Yale's guards—led by Mason, who had 13 first-half points on 6-for-11 shooting—picked up the slack.

Lo answered with a pair of triples and two layups, helping to cut the Elis' first-half lead to 29-22 with 5:12 to go in the first half.

But Yale came alive again late in the period courtesy of senior guard Nick Victor and junior guard Anthony Dallier. They combined for five three-pointers on the evening—all of which came in the first half—to hand the Bulldogs a 41-27 lead at the break.

The Bulldogs maintained a double-digit for the first few minutes of the second period, but then  Lo converted a layup and senior guard Isaac Cohen added two quick buckets to trigger a 14-4 run.

Suddenly, the deficit was just 49-45 with 9:26 to go, capped by a three-pointer from first-year Lukas Meisner to force Yale head coach James Jones to call timeout.

The Bulldogs responded ruthlessly with a three-pointer from Mason off an inbounds play and then another trey from senior guard Khaliq Ghani. The lead was back to 10 for Yale.

Lo then bottomed a three on the ensuing possession, and Rosenberg added a free throw to whittle the deficit back to six, but the Lions failed to get any closer for the rest of the game.

Mason all but sealed the contest—and the Ivy title—with two jumpers to extend Yale's lead to 64-52 with just 2:15 to go.

The Lions opted to make the rest of the contest a free shooting contest, but Dallier and Mason led the way for the Bulldogs to win at Levien Gymnasium amid all of the controversy surrounding the visitors.

Columbia now awaits to hear about its postseason plans, with the CollegeInsider.com Postseason Tournament (CIT) looming as the most likely possibility.

Smith didn't address any specific tournament in the team's future, but he explained that with more games yet to come, the loss on Senior Night wasn't quite as devastating for the four players honored on Saturday.