The Mayor of Morningside Heights

The Mayor of Morningside Heights 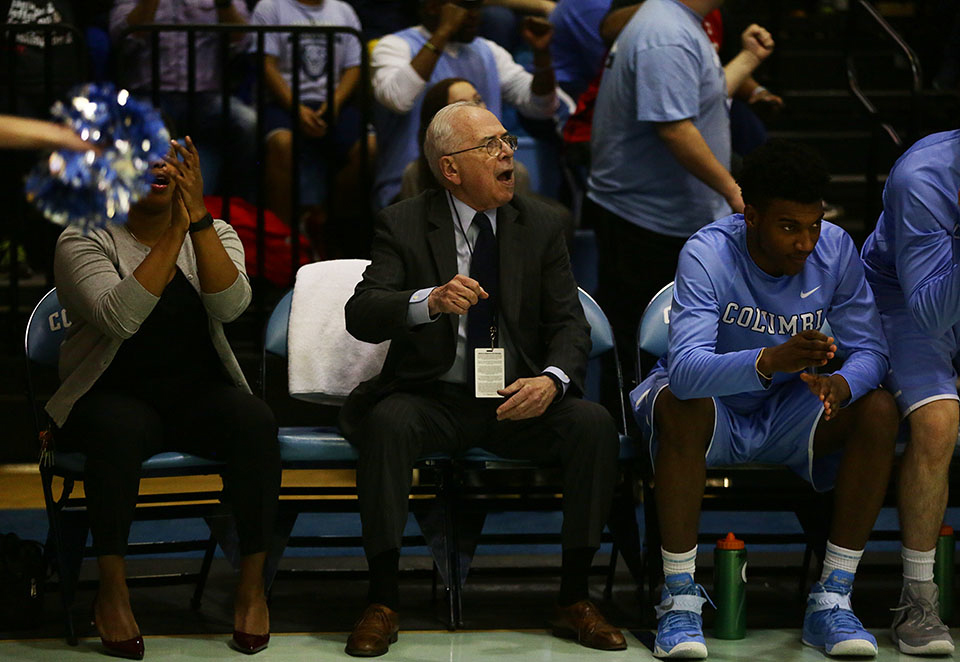 If you've ever been to a Columbia men's basketball game, you've probably wondered about that guy on the end of the bench, usually sporting a gray suit, and always sporting a smile.

His name is Jerry Sherwin, CC '55, but you can call him "the Mayor of Morningside Heights."

Ever since returning home from the army in the late-1950s, Sherwin has been an ardent follower of the men's basketball team, watching games like the 1968 Ivy playoff against Princeton from the stands. He didn't earn a spot on the floor until the early '90s, but the depth of Sherwin's involvement around the Columbia campus has extended far beyond the hardwood for decades

"There are so many different areas in Columbia that Jerry's involved," basketball alumnus Richard Gordon, CC '83, said. "He loves the school and what it represents and the people he met It's not an obligation. It's something he enjoys doing."

From winning the 2003 John Jay Award to the Columbia Black Alumni Council's 2012 Heritage Award, Sherwin's contributions to the community are extensive, and his list of accolades and roles on campus are practically endless.

He is president emeritus of the Columbia College Alumni Association, a 2010 Athletics Hall of Fame inductee, the president of the class of 1955, chairman emeritus of the Men's Basketball Alumni Advisory Committee, among others.

As even University President Lee Bollinger can attest, the former Columbia baseball player has solidified himself as a staple of the University.

"When you get to know Columbia as I have, you go to many, many events, and there's this guy who's always there," Bollinger said of Sherwin at the 2003 John Jay Dinner.

According to head coach Kyle Smith, he was introduced to Sherwin by then-Athletic Director M. Dianne Murphy during his first day on campus. Smith, unsure of what to think of the super-fan at the time, told Sherwin that he couldn't attend the team's first meeting.

But Smith soon relented, restoring the Columbia tradition by providing Sherwin with unrestricted access to the team.

The following week, as Sherwin and Smith walked through campus together, the head coach realized that there might be some issues with their relationship. The problem, as Smith reflected more than six years later, was that people constantly stopped to talked with Sherwin, making the new head coach late to just about every meeting.

"He's so sharp and has such a gift for knowing everyone's name, and he connects with so many people," Smith, who calls Sherwin "the Mayor of Morningside Heights," said.

Sherwin's limitless access also tends to come as a surprise for many incoming recruits, as junior forward Jeff Coby explained upon meeting the super-fan three years ago.

"I was very confused," he said. "I was like, why is this guy here all the time? But then now I feel like he's our good-luck charm."

Senior guard Isaac Cohen met Sherwin on a recruiting visit. The Orlando native was instantly impressed with how friendly and candid Sherwin was. Since then, he has been impressed by Sherwin's limitless commitment to the team.

"He's as much a part of the team as any player, any coach," Cohen said. "I've never seen him sick or miss anything."

The only time Sherwin even came close to missing a game, Cohen reflected, came in 2013 when the team traveled to its Ivy opener at Cornell. The players and coaches stopped at a restaurant to get a quick meal when Sherwin became dizzy and fell. Although he remained on the trip with the team to Ithaca, he wasn't able to sit on the end of the bench for the game.

According to Cohen, during a timeout, Mark Cisco, CC '13, thought he heard someone say something about Sherwin showing up. The center exclaimed, "Jerry's here?" hoping to see that Sherwin had somehow found his way to the end of the bench.

"He was so excited that he thought Jerry was at the game," Cohen said. "That just shows how important he is and how much everyone cares."

And it isn't just current players that have this strong connection to Sherwin. Long after graduating, many of the program's alumni make an effort to maintain contact.

Countless former basketball players have turned to Sherwin for help when navigating their way through the professional world. And Sherwin, without hesitation goes out of his way for the people he cares about, connecting them with the professionals that comprise the vast network he's built up over time.

"He was very instrumental in helping me when I left Wall Street and moved into banking," basketball alumnus Darren Burnett, CC '83, said. "He's just a good source of information, and it's unconditional."

And even then, Burnett maintained his relationship with Sherwin long after he solidified his place in the professional world. Since then, despite moving to Maryland and becoming busier with work and family, Burnett and Sherwin have remained friends.

"He's my source of communication if I want to find out what's going on," Burnett said. "Probably since 2000, I haven't really been in touch [with the program]. Jerry's been the one I keep in touch with."

Sherwin's love for Columbia began even before he set foot on campus in 1951—Eisenhower's last year in Morningside Heights. As a high school senior, he attended the 1951 NCAA Tournament and witnessed Columbia's heartbreaking loss to Illinois.

After graduating, Sherwin was drafted into the army during the Korean War, and later moved back to New York City. He then took a job as a DJ at 1010 WINS, a rock-and-roll radio station, which landed Sherwin the opportunity to interview the Beatles in 1962.

"I went with one of the disk jockeys to the Plaza Hotel where they were staying," Sherwin said. "The hotel was surrounded by several thousand screaming girls."

After his stint on the radio, Sherwin worked his way into the advertising business, through which he dealt with a number of high-profile clients, including Merrill Lynch. It was also at this time when he began to take a deeper interest in the men's basketball program.

Over time, Sherwin found that as he ascended in the advertising world, his desire to give back to his college community grew. This began with his involvement with the Double Discovery Center—a Columbia College initiative with the aim of increasing high school graduation, and college enrollment and completion rates for low-income and first-generation students from low performing schools in Northern Manhattan.

Sherwin became the chairman of the Board of Friends of the Double Discovery Center, and began to make inroads with the campus administration in an effort to increase diversity on campus.

Already a familiar face around Morningside Heights, by the early '90s Sherwin had retired from his advertising career and decided to establish a greater presence in the community.

That was also when Sherwin first got his spot at the end of the bench, courtesy of then-head coach Jack Rohan. Since then, the former baseball player has racked up a nearly perfect attendance record.

In fact, Sherwin can recall the last game he missed back in February 1991 as though it were yesterday.

"I had to go on a business trip," he said. "I wound up in Northern California, and it was when Buck Jenkins scored 47 points against Harvard."

As more people took note of Sherwin's omnipresence and extreme commitment, he began to gain recognition for his achievements.

And when Sherwin earned the Black Alumni Council's Heritage Award in 2012, the extent of his influence over former players of the basketball team became clear to the Columbia community.

"There are a number of alumni from the basketball team that we always contact," Kevin Matthews, CC '80 and current president of the Black Alumni Council, said. "But we don't always see them. When they knew that Jerry was being honored, they actually came because they wanted to be in the room where Jerry was being honored."

Richard Gordon was one of the alumni who made the trip. A decade earlier, inspired by Sherwin, the All-Ivy forward decided to make a positive contribution to the University and its students.

Gordon, with Sherwin's help, went to Murphy with the idea for a program that would connect graduating athletes with athletics alumni to help them navigate their way through the maze that is post-graduate life.

"My inspiration for that program was to attempt to institutionalize Jerry," Gordon joked.

But what Gordon uttered in jest has some truth to it: Sherwin continues to lend a hand to almost everyone within the Columbia community.

As the Lions cap off this season and look forward to the next, Sherwin follows suit. He may not have a formal title or a specific role, but the self-titled "super-fan" is always around—at his usual spot on the end of the bench.