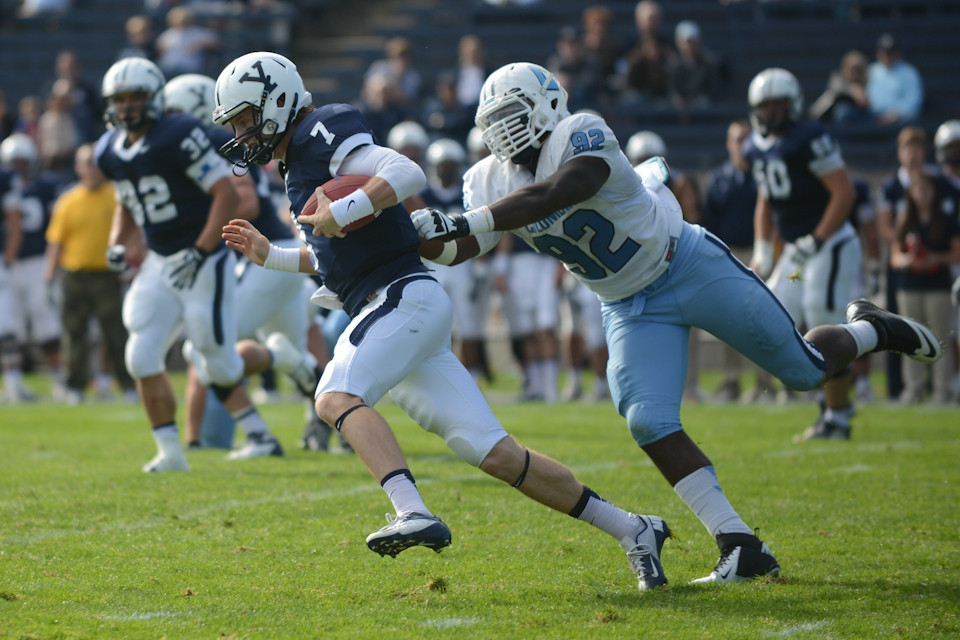 Senior defensive lineman Chad Washington was one of four Columbia seniors that took part in a pro day hosted at Fordham. The group of four are looking to continue playing football at the professional level.

Chad Washington bounces between tackling dummies on a brisk day in March on the Fordham practice field, as a stout man in a Philadelphia Eagles hat barks, "Get to the outside!"

Dozens of other NFL personnel stand along the sidelines, but Washington doesn't bat an eye, well aware that this may be the most important job interview that he'll ever have.

"If you can have the opportunity to play at the next level and continue your football career, and if you're going to do it, put everything you have into it," Columbia strength and conditioning coach Matt King said. "Don't half-ass it."

Washington, along with fellow senior defensive linemen Toba Akinleye, Niko Padilla, and Hunter Little, journeyed north to the Bronx for the Pro Day, a six-drill test of athleticism without football pads. 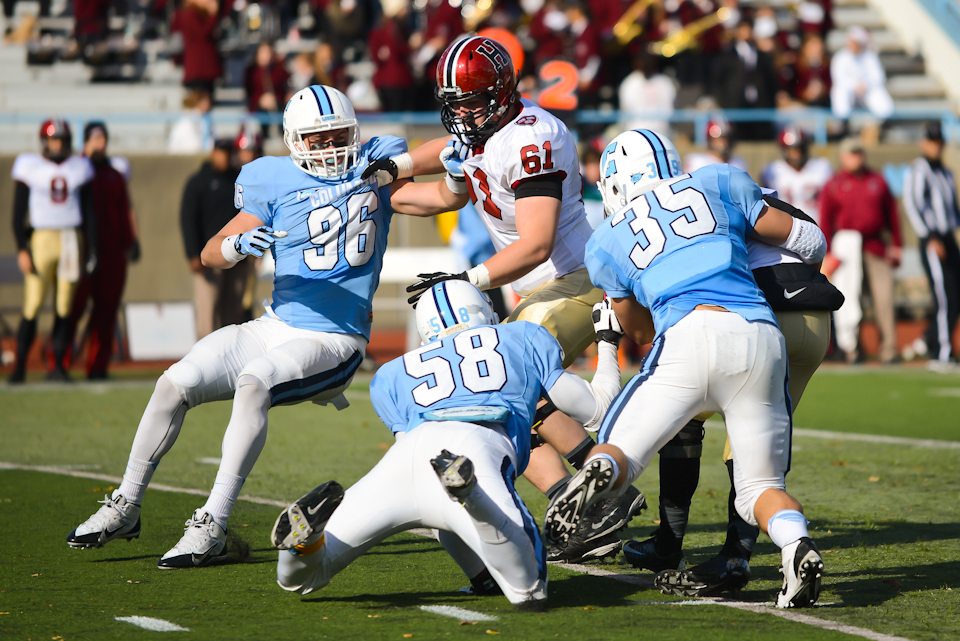 But despite the promise of having the NFL contingent present, there are more than 200 other Pro Days scheduled across the country before the draft, from April 28-30, with getting drafted being far from guaranteed.

Some players are hoping to latch onto teams as free agents after the draft, but others will look to the Canadian Football League, arena football, or overseas to continue their professional dreams.

Light Blue head coach Al Bagnoli points to undrafted free agents as those most likely to make it from the Ivy League, considering that scouts tend to overlook the play of Football Championship Subdivision schools, of which the Ivy League is a member.

"Occasionally, you'll see a kid get drafted in the sixth or seventh round," he said. "There's probably a better likelihood of ending up in someone's camp."

Pro Days become the perfect, and perhaps only, opportunity for FCS players to impress NFL personnel.

"If you don't have certain measurables, and if you don't fit the particular standards for a position, you don't have a chance," Western Connecticut State head coach Joe Loth said. He attended the Pro Day to support both his quarterback and offensive lineman.

Bagnoli added that he expects the quartet of Lions to be free agents after the draft, with NFL teams opting to sign them for training camp in the summer.

Former outside linebacker Josh Martin, CC '13, took the undrafted route in 2013 and made the Kansas City Chief's 53-man roster, an encouraging example for Washington, who is solely focused on earning a spot in the NFL.

"Playing in the CFL has never really been a goal or a dream of mine," Washington said. "I've done some research on it now, and I've dug into it, and I've still decided that."

Washington has struggled with injuries and off-field issues during his time in Morningside Heights, but he pointed to his year away from school as being instrumental in his maturation. He claims that his growth during his gap year helped him chase his dreams on the gridiron.

Emory Hunt, a Football Gameplan contributor, believes that Washington could get drafted in the second or third round, but he acknowledges that NFL teams utilize different scouting criteria.

"Obviously, my grade is different than the NFL grade," Hunt said. "I would say, by the NFL grade, he's maybe looking at sixth or seventh round or preferred undrafted free agent. But his talent will speak for itself if he's given the opportunity."

Hunt, a former collegiate running back, is no stranger to Columbia football. He sat in the stands at Princeton during a very rainy October evening, watching the Lions fall just short against the Tigers in front of perhaps 100 other fans.

Princeton relied almost exclusively on its running game that stormy night, which gave Hunt a chance to observe Washington's full array of skills.

"You got a chance to see how impactful Chad Washington can be against the run because he was able to get off the blocks with ease, make plays at or behind the line of scrimmage, and the few times that Princeton attempted to throw the football, Washington made his presence felt by being very disruptive," Hunt said.

Hunt then went up to Inwood the following weekend to watch Columbia's streak-breaking win over Wagner. Washington didn't play in that game, but Hunt was pleasantly surprised by another Light Blue defensive lineman.

"That's where Niko Padilla stood out to me as far as a guy that has that quickness and is able to get off the ball," he said. "He's a squatty, quick guy, and he was giving Wagner's offensive line—which I thought was very good—issues all game long."

Padilla posted 37 reps on the bench at the Pro Day, one of the more impressive performances from Columbia's contingent. Washington's 4.88 40-yard dash time as a defensive lineman and both Akinleye's 10-foot broad jump and 35-inch vertical also caught scouts' eyes.

Akinleye wasn't quite as fast in the 40-yard dash with a time of 4.87 as an outside linebacker, but as one scout commented at the beginning of the Pro Day, "He is the one guy that really looks the part." 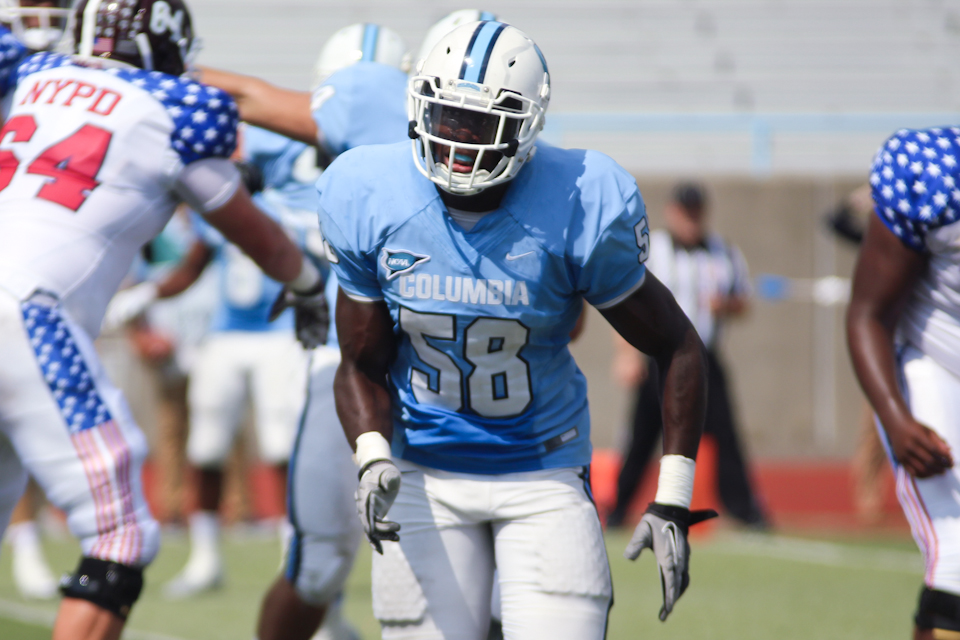 "I've had a few people tell me that Columbia had the best defensive line in the Ivy League," another scout commented. "And they have some guys that are hitting a lot of the boxes here today."

King and Bob Gilmartin deserve some of that praise working behind the scenes as Columbia's strength and conditioning coaches.

Having prepared several players for the NFL draft during his time at Maine, King explained that he guided the players on everything from Pro Day workouts to interviews.

"They're [NFL Teams] making an investment in you," King said. "And it's a lot of money they're investing in you, so they want to make sure their investment is well worth it."

Once the Lions' season ended in December, King gave each player a training program. Little went home to Tennessee to work out with a familiar trainer, Padilla worked out at Campbell with Gilmartin and King, and Washington and Akinleye—along with former cornerback Trevor Bell—have been going down to Chelsea Piers to lift.

The biggest challenge for these NFL hopefuls, according to King, was balancing their schedule during the spring semester. He noted that most of the players have withdrawn from school and don't have to take classes during the buildup to the NFL draft.

"Literally, I had a midterm every single day [that week]," Akinleye said.  He also participated in another Pro Day at Stony Brook. "That whole time, you're thinking to yourself, 'What if I just don't take this class, and I just get some rest?'"

But Akinleye has pushed through the long and stressful hours in both the classroom and in the gym, determined to complete his degree.

He added that those four players haven't enjoyed the senior spring of their peers, but they're willing to put the fun on hold for a chance to reach football's biggest stage.

"I feel like everyone who plays collegiate football or high school football, they want to play at the highest level," Akinleye said. "Being able to get a glimpse of it and get that kind of opportunity was amazing."