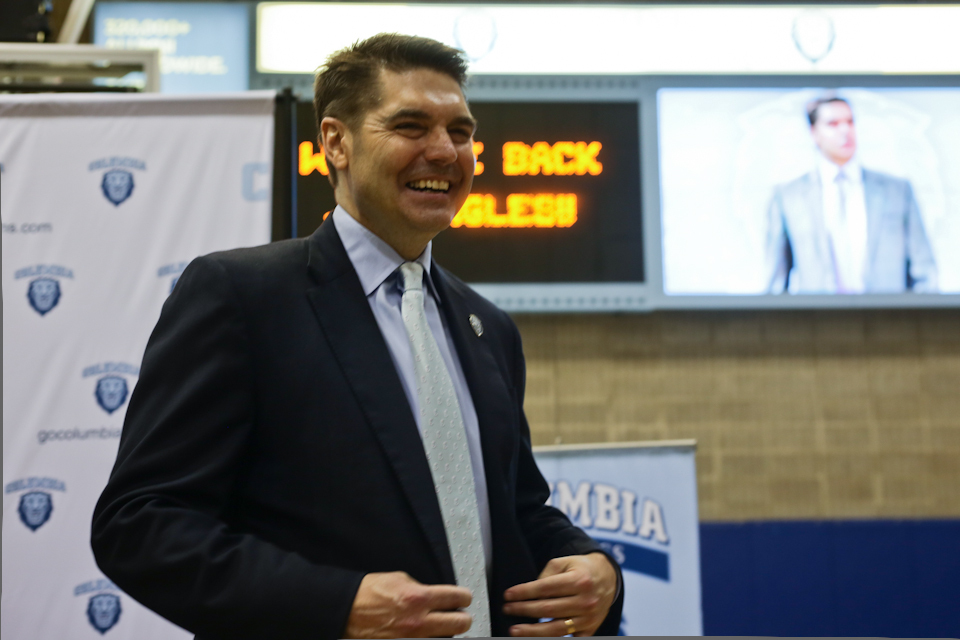 Jim Engles arrives at Columbia as the new men's basketball head coach having always wanted to work in the Ivy League.

San Francisco Athletic Director Scott Sidwell had reached out to Pilling earlier in the tournament, requesting permission to speak with Smith about the Dons' head coaching vacancy.

According to Pilling, Smith then "had a series of phone interviews" with San Francisco during the tournament, but the then-Lions head coach didn't take the process any further, stating "I'm committed to seeing my team through the CIT."

On that evening against the Highlanders, Pilling hadn't yet formally drafted a list of potential replacements, but he already had an idea about the man occupying the near sideline: Jim Engles.

"I made the comment to my wife, 'If all things happen as they might happen, this may be our coach,'" Pilling said.

Columbia advanced to the CIT final with the victory over NJIT, and later beat UC Irvine 73-67 to capture the tournament title in Smith's final game in Morningside Heights.

News broke the following day that confirmed Smith's departure to the West Coast, and Pilling promptly launched a search for his replacement, which took all of 48 hours. On April 1, the University announced that Jim Engles, who had previously been an assistant for the Lions from 2003-08, would be the new men's basketball head coach.

But according to NJIT Athletic Director Lenny Kaplan, this wasn't the first time that Columbia had considered Engles for the position.

"The last time Columbia had a job open [in 2010] he had people calling saying 'Hey, why don't you come back?'" Kaplan said. "He was still working with us [NJIT] at that point."

Engles opted against interviewing for the vacancy in 2010, entrenched in the process of guiding NJIT through its transition into Division I.

The turning point in that lengthy road to prominence came on Dec. 6, 2014, when NJIT upset then-No.17 Michigan 72-70 in Ann Arbor. Oddsmakers had favored the Wolverines by 24.5 points, but the Highlanders prevailed for its first win against a ranked team in program history.

People in and around the Columbia Athletics program took notice.

"I'd known him long before, but that impressed me," Gene Schatz, CC '79, and a member of the Columbia basketball advisory committee, said. "He took a school that won zero games and took them to being a very competitive program."

That kind of program turnaround—going from 1-30 in his first season to consecutive CIT appearances in the last two years—also intrigued Columbia. And as the 2014-15 season came to a close, Pilling had already begun to take stock of the Staten Island native.

"Kyle was considered for a [head coaching] job last year, and I had a list of potential replacements for him," Pilling said. "It was a very similar list that we started working from when Kyle left."

That position, as multiple sources have confirmed, was at San Diego, another school in the West Coast Conference. Pilling didn't offer any names on either list besides Engels, but he revealed that there were just three total candidates the second time around.

John Vaske, CC '88, and another member of the basketball advisory committee, added that keeping a shortlist of potential successors is common practice among athletic directors, who must act decisively to replace someone as successful as Kyle Smith.

"Knowing Kyle was getting interest… I think Peter had an active thought process about who was on his short list and where he would turn to," Vaske said. "Engles was a pretty obvious person to have been on that list."

Engles said he figured that he would get a shot at the job, especially after his squad's loss in the CIT. Pilling had introduced himself to Engles before the semifinal game, and they spoke briefly afterward.

Neither claims to have spoken explicitly about a potential head coach opening during that time, but those conversations foreshadowed a more formal interview just days later.

"When we were playing there had been some talk that Kyle was definitely involved with different jobs," Engles said. "They felt that if Kyle were to leave it would be a natural fit for me to come back."

After all, Engles worked under Joe Jones for five years in Morningside Heights, departing in 2008 to assume the head coaching position at NJIT. 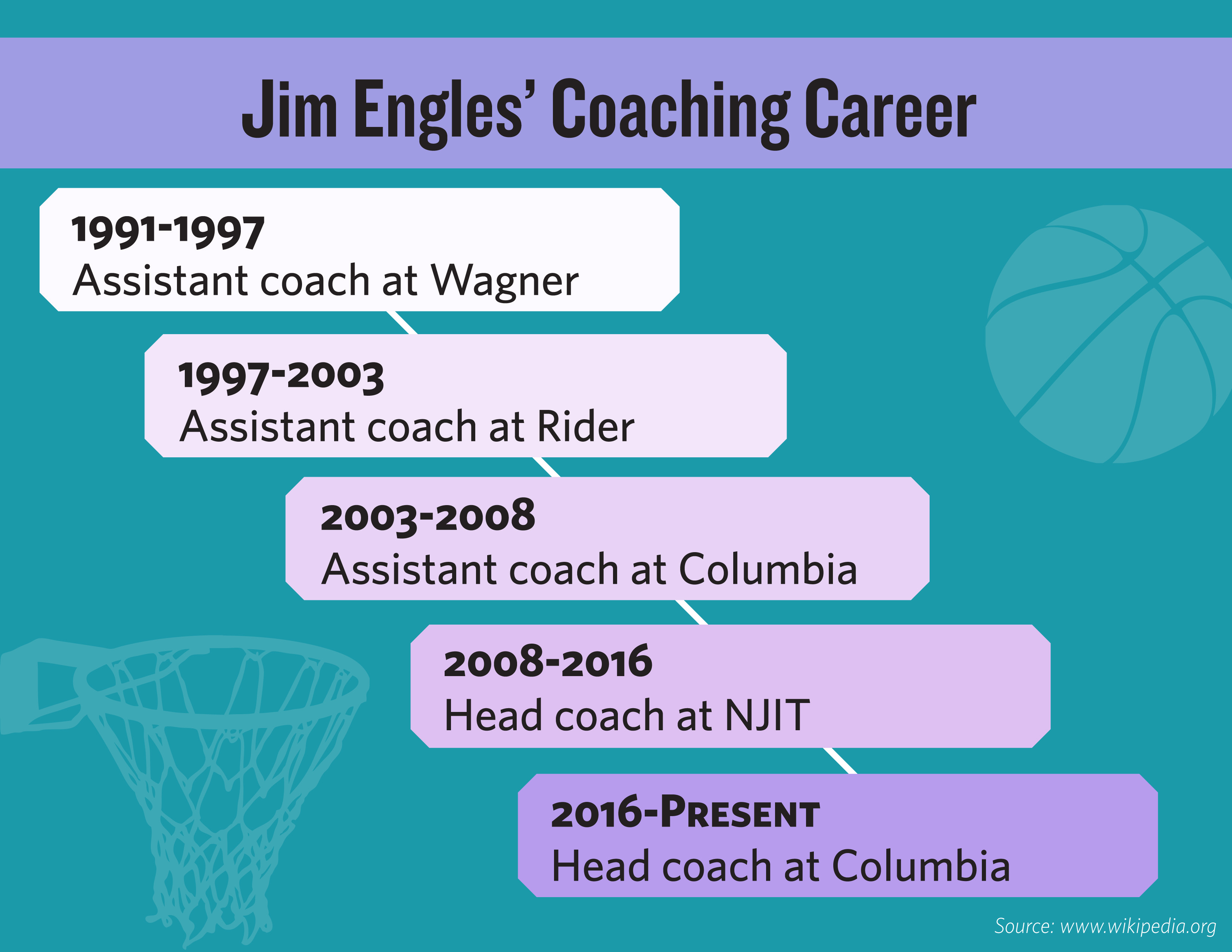 The Highlanders were one of the worst basketball programs in the country at the time, finishing 0-29 in the year before Engles arrived. NJIT then dropped its first 18 games in 2008-09, extending the program's overall losing streak to 51 games, a Division I record that still stands today.

Finally on Jan. 22, 2009—after 702 days without a win—the Highlanders defeated Bryant 61-51 to snap the losing streak. NJIT failed to win another game the rest of the way, but Engles and his team remained positive.

"When we lost that first game the reality hit me, and it was like 'Man, now we know what we're into here,'" Engles said. "You can't go 0-60 in two years because then you really can't get the program started. Once we won that one game, everybody was able to let it go a little and relax."

By his second season, the program earned a spot in a Division I conference, the Great West, for the first time in its history, and finished with a 10-21 record. The Highlanders finished 15-15 the following year and then 15-17 in 2011-12 before their breakthrough year in 2012-13.

The Highlanders won 16 games that season, claiming the Great West regular-season championship, and NJIT only continued to improve in the two campaigns that followed, surpassing the 20-win mark in consecutive years.

Former player Ryan Woods started at the forward position for Engles' from 2011-2013, and he points to Engles' consistent plan and mindset as the keys to the turnaround.

"I think that a lot of times in sports people want things to be better overnight, but coach Engles took it day by day," Woods said. "He's not someone that's gonna rest on his laurels ... and I think that's what helped them break the 51-game losing streak and what led to a conference championship, hanging up banners, and getting a new practice facility."

Those successes come as little surprise to Tim Capstraw, who was the first to give Engles a coaching job. Capstraw was the head coach at Wagner in 1991, and he helped push the Staten Island native away from a more popular and lucrative career path.

"I figured since my family had already worked on Wall Street, I'd probably end up on Wall Street," Engles said. "So at the end of college I sent out my actual work resume, and then I sent my basketball resume."

To Engles' surprise, Capstraw offered him a job within a week of receiving his resume, transforming what had once been a pipe dream into reality.

The 47-year-old arrived at Wagner as the third assistant, but according to Capstraw he quickly became an integral piece of the team's puzzle. And it soon became clear to the Seahawks' head coach that Engles was headed for bigger things.

"If you took a poll among the 300-something coaches in Division I, and asked, 'Who in the last 5-10 years has done the best job in college basketball?' there is no way that Jim Engles wouldn't be in the top five or ten of that nationally," Capstraw said. "Coaches can't believe it. A lot of people would say, 'I don't know who's done better.'"

In 1997, after becoming one of the top assistants at Wagner, Engles left for a similar position at Rider, and then he and his family bought a house in Newark, where they still live today. Engles spent six seasons at Rider before expressing interest in joining Joe Jones at Columbia in 2003.

Jones hired Engles on the spot without an interview, impressed by the same fastidiousness and natural charm that had impressed Capstraw at Wagner.

Engles stayed in Morningside Heights for five years, as he tried—in his own words—to rebuild a program that wasn't initially focused on winning.

"When Joe and I got here, it was really just trying to organize it and make it competitive," he said.

The duo helped to transform a team that had gone just 2-25 in 2002-03 into a consistent double-digit winner. Columbia wasn't challenging for Ivy titles at the time, but the Lions were far more competitive than they had been in years prior.

Jones now coaches at Boston University, having left Columbia in 2010, and he knows first-hand how good NJIT became under his former assistant. The Highlanders bested Jones' Terriers twice this past season, including in the CIT.

"You didn't really know what was coming next," Jones said. "He really keeps you off-balance, and he's tremendous at the time-out. I was doing everything I could to avoid going back to NJIT [in the CIT]. He kicked our butts again."

The Highlanders beat the Terriers 83-72 in the second of the CIT that evening, as Engles claimed his 109th victory. He would only win two more games before departing for a position that he had long coveted.

Capstraw, Jones, and Brian Kennedy, a former assistant coach at NJIT and now Engles' successor, all noted that the former Columbia assistant had expressed a strong desire to eventually be a head coach in the Ivy League.

Given his five seasons of experience under coach Jones at Columbia, the Light Blue's vacancy seemed like the most logical way to make that dream a reality. So when the opportunity came around for Engles to take the helm, it was an offer he couldn't pass up.

As it turns out, Engles repeated that exact line at his introductory press conference on April 7, becoming the 23rd head coach in school history.

"I've never really had the aspirations to be the coach at Rutgers or Seton Hall or St. John's," he said. "This is the place that I've always wanted to be."