The Roots of Al Bagnoli

The Roots of Al Bagnoli 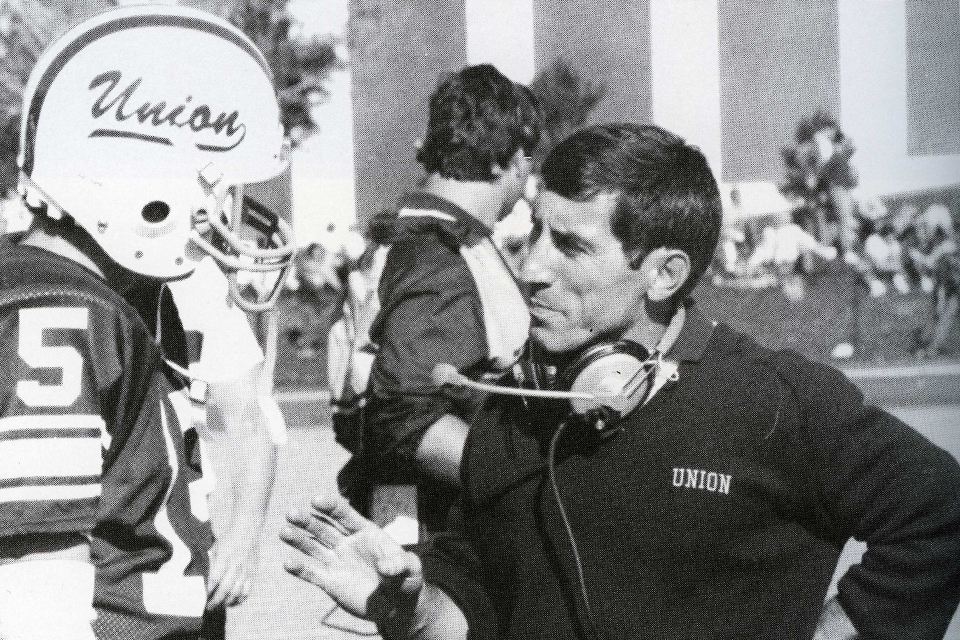 Columbia head coach Al Bagnoli on the sidelines at Union College in 1986.

Ahead of last Saturday's scrimmage with Cornell, head coach Al Bagnoli admitted that he didn't exactly expect to return to Union College for the preseason tune-up.

Columbia was looking for a midway point between Manhattan and Ithaca, and that happened to fall in the Capital District. Albany and RPI were the first two choices to host the scrimmage between Ivy foes, but when both schools said no, the 63-year old head coach turned to his former stomping grounds.

Nearly 40 years after first stepping foot on campus in Schenectady, New York, Bagnoli remains an enduring figure at Union College. A member of the school's Hall of Fame, he went 86-19 in his 10 seasons as head coach of the Dutchmen, reaching the Amos Alonzo Stagg Bowl in 1983 and 1989.

When Bagnoli arrived in Schenectady in 1977 as the defensive coordinator, the Dutchmen hadn't pieced together a winning season since 1970. They struggled to compete in the New England Small College Athletic Conference alongside schools like Williams and Amherst, according to Sports Illustrated's Tim Layden.

"I went to Williams, and I played basketball, not football," Layden, who covered Bagnoli in the early '80s for the The Daily Gazette of Schenectady, said. "But I had a lot of friends who were football players, and Union was an automatic win for Williams every year."

The Dutchmen left the NESCAC in 1977. As a result, they faced less stringent recruiting rules and had a chance to compete for the Division III national championship. Still, it wasn't until 1980 that Sakala hired former Brown assistant Joe Wirth as head football coach.

"I made that decision. And to me, it was the right decision, because Al was not quite ready then," Sakala said.

Bagnoli was still in his late 20s at the time, just a few years removed from working under legendary head coach Bob Ford at Albany.

"We had taken him as a graduate assistant out of Central Connecticut," Ford said. "His head coach down there, Bill Loika, was a good friend, and he had recommended quite a few guys from Central Connecticut to come with us. Al was an outstanding young coach."

It was in Albany that Bagnoli met John Audino, current Columbia tight ends coach and passing game coordinator, as the duo became schooled in the finer parts of coaching.

"My stint at Albany [with] Bob Ford kind of taught you how to treat people, how to organize, and do everything else," Bagnoli said.

The defensive coordinator under Ford for two seasons, Bagnoli also stood out for his competitiveness, even when it came to getting into the office. Ford reflected on how he'd always tend to arrive at the football facility by 6 a.m., and Bagnoli often would be there to greet him.

That level of dedication and commitment stayed with Bagnoli as he moved northwest to Union College in the late 1970s. And with the arrival of Wirth in 1980, he began to receive a schooling in defense from Union's new head coach—a defensive genius, according to both Bagnoli and Ford.

"Joe was zone blitzing before the NFL was zone blitzing," Bagnoli said. "We were doing things that the NFL started doing in the early 2000s … You learn different things from different people, but he was as good a football tactician as I've ever been around."

Wirth also brought a novel approach towards the recruiting trail, reaching out to administrators across the college to help turn the football program around. Of course, Sakala played a significant role in convincing the entire campus to back a previously woeful program in 1980.

A winning season didn't immediately follow, with Wirth departing to take the Brown head coaching job after going 4-4-1 in 1981. But in stepped Bagnoli the following season on his old boss's recommendation, and soon the Dutchmen were flying high—for the first time in what seemed like an eternity.

Union finished 8-1 in Bagnoli's maiden season in 1982, and then went to the Division III playoffs the following year, traveling to Hofstra in the first round.

"They just completely annihilated Hofstra," Layden added. "[After] that—for everyone that covered them, for everyone that knew of the Union program in the Capital District and Albany area—we knew that they had built something that we didn't even understand at that point. "

A close victory against Salisbury University followed in the semifinals, setting up a national title clash against Augustana, a perennial Division III powerhouse.

The Dutchmen entered as massive underdogs, but with less than 10 minutes remaining in the contest, they clung to a 17-7 lead. Augustana promptly scored a touchdown before Union wide receiver Winston Britton fumbled on his own 46. Augustana marched down the field for another touchdown to seal it 21-17, but according to then-offensive coordinator John Audino, it was encouraging that the Dutchmen could go toe-to-toe with nation's best.

Union returned to the playoff semifinals in 1984 before falling in the first round in each of the next two years, with Audino still in charge of the offense under Bagnoli. The Dutchmen finished 28-4 during the pair's three seasons together in Schenectady, where Audino directed a pretty unusual offense.

The offense also operated at faster pace than most of its opponents, with quarterback Dan Stewart at the center of the hurry-up system. Stewart even set a record during his time at Union with a touchdown pass in 36 straight games. It broke Steve Young's collegiate record and prompted a call from the Hall of Fame quarterback himself.

Audino chuckled at the memory of hearing from Steve Young amid such a successful period at Union, but he remembers how daunting it was to replace Bagnoli in 1992. His predecessor departed for Penn, leaving behind an outsized legacy after having brought the Dutchmen to the playoffs six times in a decade.

"I think Al Bagnoli was sort of the Division III version of Nick Saban 30 years ago," Layden said. "He had a program that was perfectly designed from top to bottom, and he had great players. I think that was because he had the entire college on board with what he was trying to do."

That approach has endured even to this day for the now-63-year-old.

If history is any clue, Columbia—which hasn't had a winning season since 1996—may be next. With a new athletic director in tow and an indoor practice facility on the way, Bagnoli may now have the institutional support he needs to restore the Lions to their former glory.