The Bubble that Bagnoli built

The Bubble that Bagnoli built 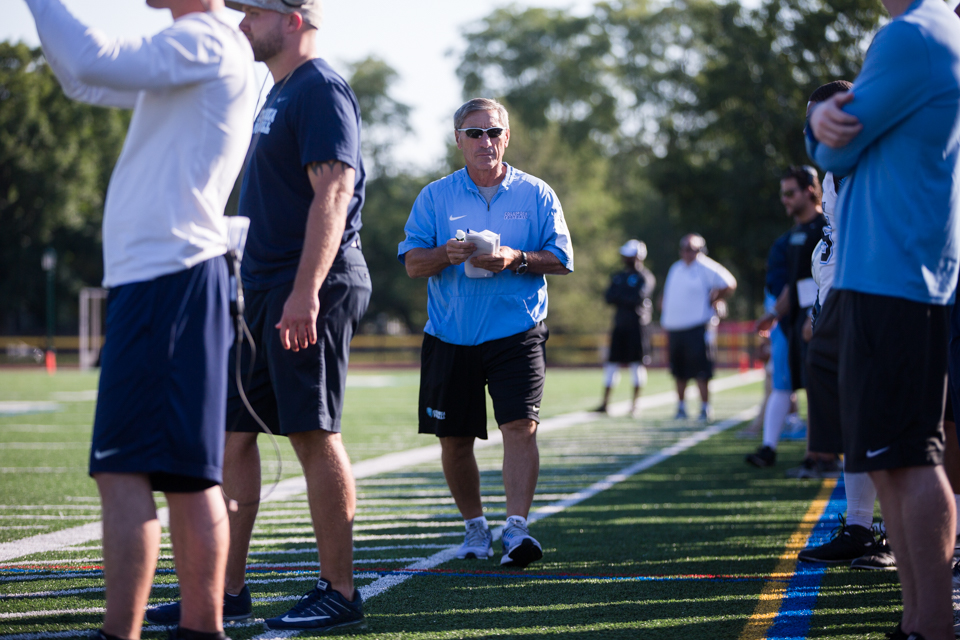 Head coach Al Bagnoli was instrumental in the planning and construction of the Bubble.

Football has often practiced in Levien Gymnasium during the winter months or even been forced to trek up to Robert K. Kraft Field in the cold. While head coach Al Bagnoli had to deal with those circumstances a year ago, he and Athletic Director Peter Pilling have ensured that won't happen again.

Three months ago, construction began on the Bubble at Baker to turn Rocco B. Commisso Soccer Stadium into one of the largest closed-air structures in the Ivy League. The new indoor facility will provide a number of intercollegiate, intramural, and club teams an escape from the harsh New York weather and is expected to open in November.

But the road to upgrading the Lions' practice facility—and leveling the playing field across the Ivy League—truly started in February 2015, when Pilling first hired Bagnoli from his head coach post at Penn.

Bagnoli helped oversee a similar project at Penn in 2011, when the Quakers built their own bubble at Penn Park. So when he arrived in Morningside Heights in February 2015, one of Bagnoli's first priorities was to begin planning for a new indoor practice facility.

"When I was at Penn, we watched what Harvard was accomplishing when they covered their stadium with an inflatable bubble," Bagnoli said. "During your offseason, you had a full-length field to go and work on your speed, agility, change of directions. Your kids could get in there and practice football year-round, so you could throw, catch, kick, and defend."

Pilling had a front-row seat to Bagnoli's pitch back in early 2015, and even today, Columbia's athletic director refers to those conversations as "the origin of the Bubble project."

The next step—for Bagnoli, Pilling, and Athletics—was to convince the University to help support the project. The board of trustees later gave the go-ahead, but one key question remained: How would Columbia fund the construction of this massive facility?

With a price tag of $10 million, that's no easy task—even for a university with an endowment of $9.64 billion. The athletics department turned to its alumni base and began the process of what Marcellus Wiley, CC '97, called "re-recruiting" former Columbians. 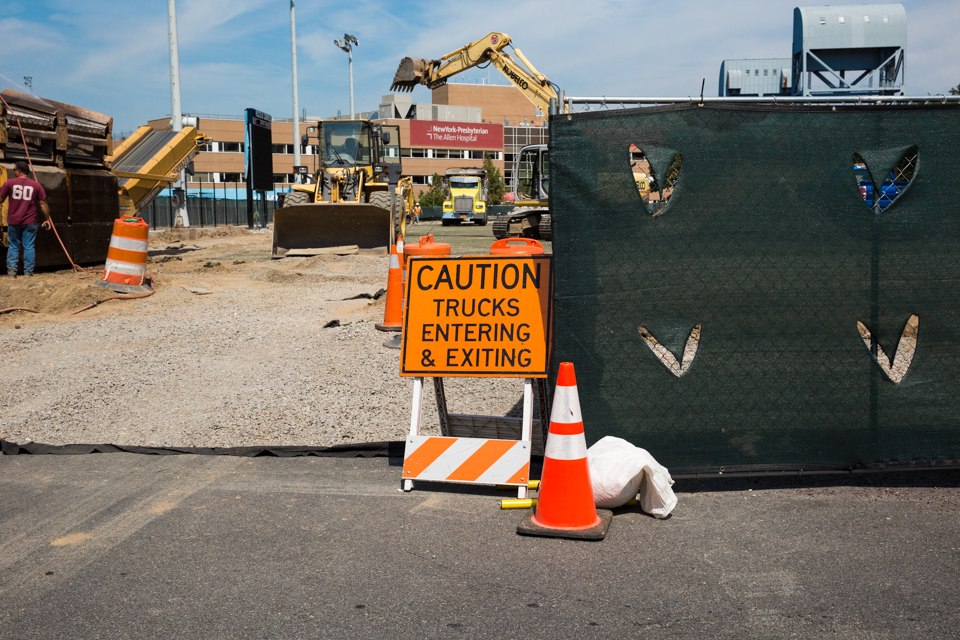 A culture of losing had caused disillusionment about Columbia football among certain alumni. But with the combination of Bagnoli's arrival, a two-win season in 2015, and a truly elite recruiting class in 2016, the tide has begun to turn.

Bagnoli and Pilling also took the initiative to connect with alumni who felt distanced from the University. As a result, the duo began taking trips to the West Coast to try and expand the donor base.

According to Pilling, these trips aimed to raise money for three primary categories: the annual fund, endowment, and capital needs. With the Bubble at the forefront of their discussions, Bagnoli and Pilling were able to convince certain alumni, who had previously been skeptical, that better days were ahead.

"It was really Coach Bagnoli who motivated me to give," Wiley said. "I know this time feels different because I don't ever remember us having a top-three FCS recruiting class. And knowing that you have a coach that in his 23 years won nine Ivy League titles? I like to play those odds."

Wiley, a 10-year NFL veteran, played on the 1996-1997 team that went 8-2. He still remembers how the Light Blue united the entire campus, and Wiley hasn't felt similar optimism until now.

Wiley's teammate and close friend Rory Wilfork, CC '97, offered similar sentiments, as he always admired Bagnoli's passion from the opposing sidelines. Wilfork also discussed the legacy of legendary alumnus William "Bill" Campbell, CC '62, who pledged upwards of a million dollars to the project before passing away in April.

"I just think it's a shame that Billy Campbell won't be here to see a lot of this transpire, but he kept the program afloat for a lot of the time," Wilfork said. "For a lot of people, though, it was Bill's way or the highway, so that turned some people off too. It could end up fostering a situation where more people feel like they're actually able to make an impact. Alumni feel like they have to fill the void left by Bill Campbell."

Matt Sodl, CC '88, was another influential alumnus on the West Coast, encouraged enough by the recent hiring of Bagnoli to donate upwards of $50,000. Sodl felt that the key difference with this particular project was Bagnoli's willingness to outline clearly the need for the indoor facility. Sodl also stressed the importance of having Bagnoli and his staff speak directly to alumni, believing that the personal touch sold him on the project.

Bagnoli and Pilling's other focus among alumni was to energize older Columbians, including Ed Botwinick, CC '56 and SEAS '58, and Howard Hansen, CC '52. Botwinick played football under the legendary coach Lou Little in the early 1950s and told Spectator that Bagnoli sat down with him at the very beginning of his tenure. That meeting, according to Botwinick, sold him on the new direction of the Columbia football program.

Botwinick added that he had offered to contribute a sizable donation a few years back to help fund an indoor practice facility closer to the campus. His proposal would have required construction to commence directly on the Hudson River, but the University wasn't interested at the time.

Fast forward to the arrival of Bagnoli and Pilling, and Botwinick has opted to donate upwards of $100,000 to the project, determined to help give the football team a luxury that it had previously never had. He has also channeled his dedication to athletics into a willingness to work with Columbia to reignite a passion for football among fellow alumni.

One alumnus who spoke highly of the new regime was Hansen, the Lions' all-time leader in yards per carry. Recently elected to the Columbia Athletics Hall of Fame, Hansen credited Pilling with helping to institute the Lou Little Cup, named for Hansen's head coach and the winningest coach in Columbia football history.

The creation of the Lou Little Cup—awarded to the winner of the annual game between Columbia and Georgetown—was one step towards addressing the concerns of older alumni and recognizing the University's storied past. Joe Quinlan, the senior associate athletic director, added that Pilling shined during that alumni event before the Georgetown game, impressing Lion and Hoya alumni alike.

"It shows that Columbia is really committed to its alumni and its legacy as a football program," Quinlan said. "It also casts a very favorable reflection for the Georgetown alums, who say, 'This guy [Pilling] is tremendous.'"

Quinlan and Pilling will travel to Boston to host a similar function for Boston-area alumni when the football team takes on Harvard on Nov. 5.

"We're not where we need to be from a fundraising standpoint. We still need two to three million dollars for this project," Pilling said. "So we're still guns ablaze, and coach Bagnoli is focused on football now as the season starts, so our development team is still working on identifying potential donors for the Bubble."

While there's still more work to do, the Light Blue have made monumental strides towards erecting the multi-purpose athletic facility in Manhattan, with Bagnoli at the very center.

"If you look at our coaches, they are program builders," Pilling said. "You see the excitement about coach Bagnoli and what he's doing with the football program. I see a freshness, a rejuvenation around this program. The alumni are excited about the future, and you can really tell."