Columbia returns four of five starters on its offensive line this fall.

Mark Fabish is the new offensive coordinator after working as the wide receiver coach in 2015, and beginning this spring, he's set out to build what he's called "The Columbia Offense."

"What we tried to do [last year] was get bits and pieces of each [coach's philosophy], and the result was a hodgepodge of plays and play-calls that didn't really mesh," Fabish told Spectator in April. "You all saw the results—it really wasn't effective. What we set out to do was to wipe it clean and build Columbia's offense going forward."

The Lions snapped a 21-game losing streak in Bagnoli's first season, with a 21-7 victory over Wagner. They later beat Yale 17-7 for their first Ivy win since 2012, but the Light Blue scored just  14.3 points per game and averaged the fewest yards of total offense in the Ancient Eight.

The solution, according to Bagnoli, will be a more coherent, up-tempo system this fall.

Instead of senior quarterback Skyler Mornhinweg relaying the play in the huddle, each player is responsible for getting the play call from the sideline. The result should be less time between snaps, wearing down the defense, and giving them less time to make adjustments.

While that faster pace is a stark contrast from last year's slower, pro-style offense, Mornhinweg has helped ease the learning curve. The Philadelphia native has operated in similar systems at Florida and in high school.

Columbia will also benefit from an offensive line that returns with four of five starters. Seniors Kendall Pace and Nathan Gibbs, junior Bewley Wales, and sophomore Charlie Flores have combined for a total of 54 starts.

"[Their experience] is definitely huge," Mornhinweg said. "Just being able to trust your guys up front and being able to sit in the pocket and make throws is big time. It starts up front, and it ends up front, so they're gonna be a big part of our offense this year."

But the offensive line's biggest challenge may be paving the way for the Lions' carousel of running backs without Cameron Molina, CC '16, in the backfield anymore.

"It's not going to be what Columbia fans have become accustomed to with Molina carrying the ball 40 times in the last game and 30-plus against Cornell," Fabish said. "I think we're going to do what we can to call as many runs as we can. It just might be a running back by committee more than it was last year."

Figuring heavily into that "running back by committee" will be two first-years—Tanner Thomas and Lynnard Rose. Thomas came to Morningside Heights as a highly-touted recruit and took most of the snaps in Columbia's first scrimmage against Cornell. He's currently listed at second on the Light Blue depth chart behind junior Chris Schroer, while Rose is the starting kickoff returner and should also get snaps on offense.

"Wainwright is a unique talent," Fabish said. "He's done a phenomenal job—he plays fast, has the ability to get open and separate from DB's [defensive backs] … Everett has a unique set of hands—he's got a tremendous catch radius, so the young guys in conjunction with the experience make it a unique group to work with." 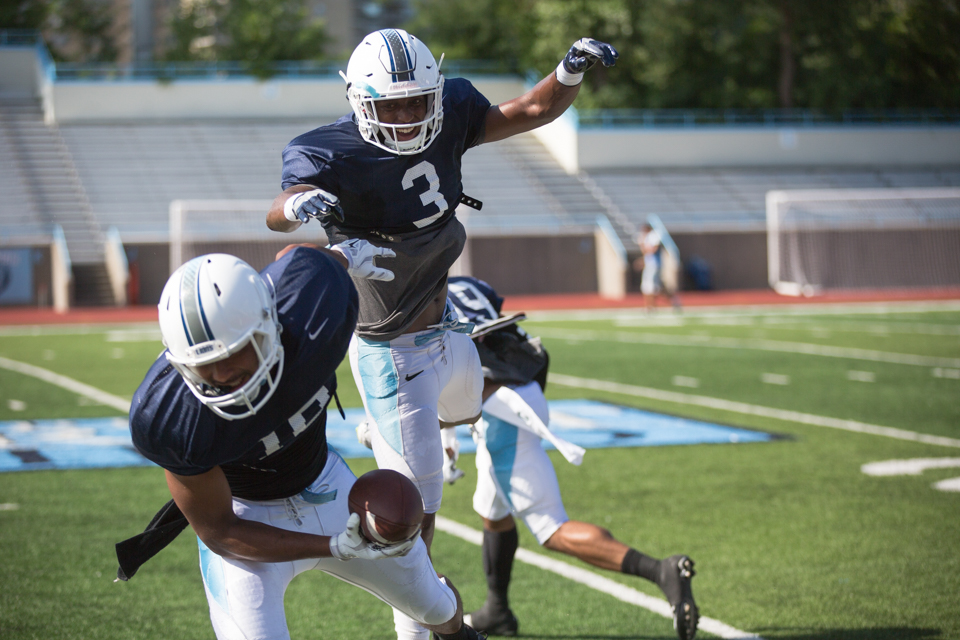 The defensive line featured similar quality depth in 2015 but has since graduated three All-Ivy performers from a unit that ranked among the best in the Ancient Eight.

"We're going to have a lot of kids that don't have extensive playing experience," Bagnoli said. "You look at the defensive ends: They're gonna be new, and they're gonna have to hold up against some pretty big, stout kids."

The defense—unlike the unit on other side of the ball—has the luxury of playing in the same 4-3 scheme, but even they won't be immune to the changes on the offense. With Fabish looking to push the tempo, a string of quick scores or three-and-outs could leave the defense with little time to rest on the sidelines.

Columbia led the Ivy League in possession time with 33:31 last year but failed to create enough explosive plays to finish better than 2-8 and seventh in the Ivy League. The Lions are once again picked to finish towards the bottom of the Ancient Eight, but with a new offense and talented recruiting class in tow, they're aware of but not deterred by the preseason poll.

"We get it—Coach Bagnoli talked with the staff about it," Fabish said. "I know that in the years we won at Penn, we were picked middle of the pack, and we never paid attention, we just went to work. As soon as you start paying attention, your focus is somewhere other than where it needs to be. The more that we focus on the task at hand, the more likely it is we'll be successful in that moment."