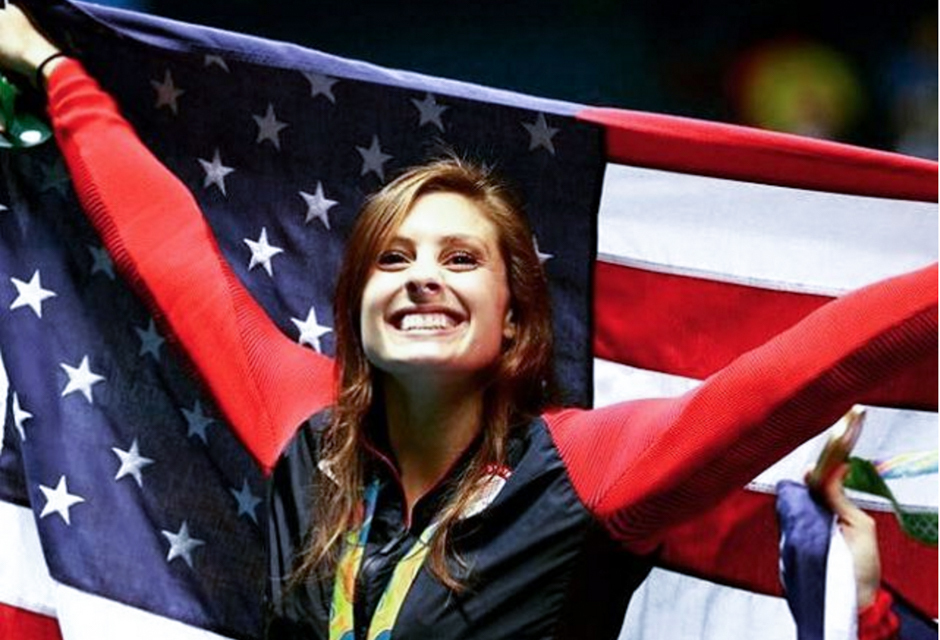 Katie Meili, CC '13, won two medals at the 2016 Summer Games in Rio de Janeiro, including a bronze in the 100m breaststroke.

I have always had a dream of going to the Olympics, winning a medal, and standing on the podium, watching our flag rise over my head. But it was one of those dreams that you never expect to become a reality. It's similar to dreaming about winning the lottery or becoming a Hollywood star… very cool but it would never actually happen.

Well, with some hard work and a lot of support, it did happen, and I could not be more grateful or excited that it did. There were a few moments in Rio when I found myself overwhelmed with emotion—putting on my opening ceremonies outfit; swimming my first lap in the competition pool and seeing the Olympic rings everywhere; walking out for finals and seeing my family in the stands. These powerful moments reminded me that I was actually living this dream!

Before I discuss more about the meet, I want to share a few things about our two staging camps. We came together as a team in San Antonio shortly after Olympic Trials. While training at the Northside ISD Natatorium, we were treated to some wonderful Texas hospitality. San Antonio was the first place the group started bonding. The women's team played ice-breaker games to get to know each other. Games supposed to last 10 minutes ended up lasting over an hour—mainly because we are all too competitive for our own good, but also because we truly enjoyed spending time together.

When we moved to our second training camp in Atlanta, you could feel something special and tangible happening to the group. Everyone was getting ready to perform at their best! When we weren't in serious preparation mode, we played Pokémon Go nonstop, completed our rookie skits (and laughed so hard), and filmed carpool karaoke—some of the most fun car jamming sessions I've ever had. Thanks to Mark Cuban, we flew to Rio in style on a private plane, and even got to cross paths with Air Force One and President Obama on the runway. We could not have had a better sendoff from the USA!

We were a bit apprehensive about our arrival in Rio. Like many of you, we were aware of the negative news about the city, the village, and the venues. However, when we arrived we quickly realized that our worries and hesitations were far from warranted. Everything was wonderful. The city and its views were beautiful, the village was perfectly functional, the venues were great, and the people and volunteers were accommodating and helpful! Also, in the 14 days I was in Rio, I saw one mosquito and had zero mosquito bites… Zika definitely did not rain on our parade!

The first time I saw the competition pool with my own eyes, I felt like I was in a dream. Walking onto the deck as a group, you could sense the power of our team. It was at that moment that I, and every other person in the building, knew Team USA was going to do something special that week.

I swam prelims of the 100 breaststroke on the second day of the meet. I was so excited and happy to race—I just wanted to dive in and go for it. I swam with all of those emotions, and while I posted a good time, I knew I didn't swim it correctly or efficiently. I had to reassess for the semifinals, and while I didn't swim a great time, I advanced to the final and had a much more controlled and relaxed race.

I knew that if I found a happy medium between my prelim and semifinal swim, I could accomplish what I wanted to accomplish in finals the next night.

I woke up calm and determined on the morning of my 100 breaststroke final. During my warm up that evening, I was nervous, but nervous-excited (unlike trials, where I was nervous-scared—or just plain scared), and I felt strong and powerful in the water. There was a lot going on in the ready room before our race, but I found a quiet place to sit and think.

I thought about what an incredible honor it was to represent the United States. I thought about how grateful I was for the men and women in our military who put their lives on the line daily so that we had the opportunity to go to represent the United States at the Olympics. I thought about all of the people who had helped me at some point in my journey. I wanted to list them by name so I could dedicate my swim to them, a small token of thanks for all of their help along the way.

When I walked out to the blocks I was overwhelmed with joy. I could not stop smiling! I looked up in the stands and took it all in. I saw my family cheering (my sister gave me a small nod), and I knew I was ready to go. I don't really remember what happened in the minute and five seconds it took to get down the pool and back, but I do clearly remember turning around and seeing third place next to my name.

I was overjoyed. I earned a medal for the USA at the Olympics. My biggest dream come true. There aren't words to do that feeling justice. I swam to give Lily King a hug for her amazing gold-medal winning performance, and was so thrilled to celebrate with her. To say it was a special moment is an understatement.

I didn't sleep the night after my race. Instead, I celebrated by eating pizza at 4 a.m. in the dining hall at the village.

I later went to the Today Show at 6:30 a.m., saw my family, and enjoyed the success. But while I had the rest of the day to rest and relax, I still had to get ready to swim the 4x100 medley relay.

The next few days were filled with astounding performances by the USA. I was so proud to be a member of that team; every one of my teammates had inspiring swims. I used that inspiration for my swim on the prelims 4x100 medley relay. Along with Olivia Smoliga, Kelsi Worrell, and Abbey Weitzeil, we advanced our relay to the final, where Kathleen Baker, Lily King, Dana Vollmer, and Simone Manuel went on to win a gold medal. Swimming on a relay for the United States is a huge honor, and I am so grateful I had that experience with those amazing women.

People often ask me if I feel like my life has changed since the Olympics. My answer is yes, but not because the Olympics itself is some sort of life altering force. The Olympics are the most remarkable and wonderful swim meet I've ever been to, but, at the end of the day, it's just a swim meet.

Katie Meili, CC '13, won two medals at the 2016 Rio Olympics, including a bronze medal in the 100M breaststroke.

From the Lion's Mouth