Women's soccer's home away from home

Women's soccer's home away from home 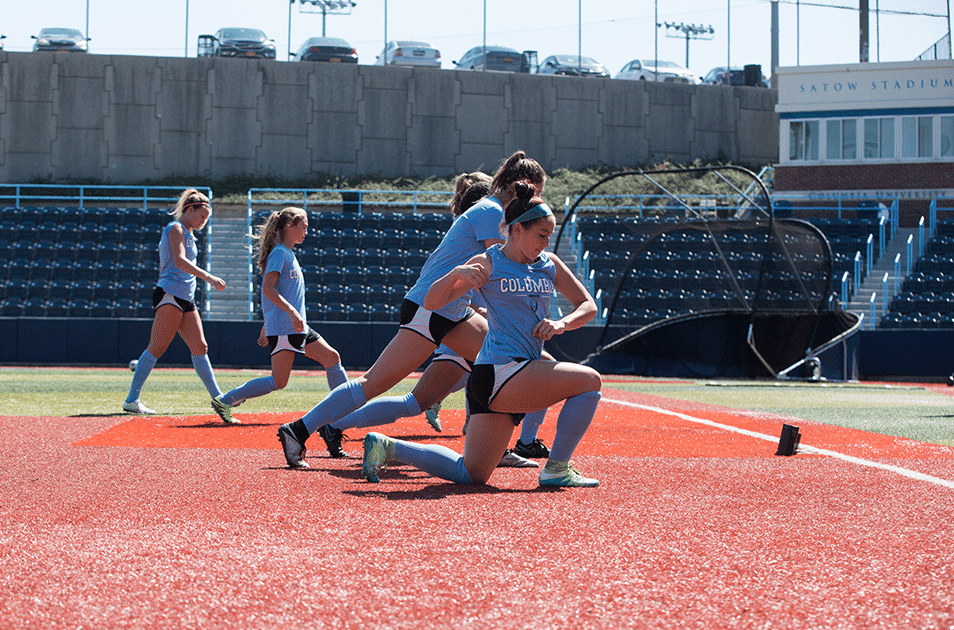 Due to construction on the Bubble at Baker, the women's soccer team has had to move practices to the baseball and football fields while games are held at Fairleigh Dickinson University in New Jersey.

The Bubble at Baker looks set to level the long-term playing field with the rest of the Ivy League, with student-athletes soon being able to train through the winter.

But at least this fall, Columbia women's soccer has yet to reap the benefits of the new facility, as construction has forced the Lions to get creative.

In the absence of Rocco B. Commisso Soccer Stadium, the Light Blue mostly practices at the the football or baseball stadiums. With very different field dimensions, head coach Tracey Bartholomew has sought to play faster on small fields, which paid dividends in wins against Sacred Heart and Wagner earlier this month.

Meanwhile, the Lions have opted to be more patient on larger fields, always looking for the extra pass with far more space to navigate.

"When we play on bigger fields, things like sprinting an extra 10 yards over 90 minutes affect us," Bartholomew added. "It's different, but we try to adjust the best that we can."

But while Baker's other fields remain a rather convenient option, the Lions have also opted to use Fairleigh Dickinson University's field most Wednesdays. The choice stems from the fact that Fairleigh Dickinson is serving as a temporary home for three of the Lions' five home matches.

"Fairleigh Dickinson is a top-rate, quality surface," associate athletic director Matt Scally said. "We want to put our kids in the best conditions possible and I believe we found that with Fairleigh Dickinson."

Located only 15 minutes away in Teaneck, New Jersey, the Fairleigh Dickinson University Soccer Stadium will remain in use until Oct. 15, when the Light Blue make their homecoming to the newly improved Rocco B. Commisso Soccer Stadium.

But critical in claiming the Fairleigh Dickinson grounds was the relationship Bartholomew and Scally had established prior to their arrival at Columbia.

Scally also has roots at the Brooklyn institution, serving as the associate athletic director and director of compliance during his 22 years there, and, as a result, he has numerous ties across the eight-team Northeast Conference.

"Reaching out to some colleagues, we were able to find fields that were available for us to use," Scally said, "We were fortunate that the administration at Fairleigh Dickinson was so cooperative and open to supporting us."

As it turns out, the situation, though not ideal for the season, isn't all that foreign to captain and senior forward Madeline Linde and her teammates.

"During club in high school, we never really had a home field," Linde said. "We all played in random places, so we're used to being on the road constantly."

This season, the team has rallied around the idea of becoming a road warrior team, a group that is unphased no matter where it plays. According to Linde, it's become their unofficial season nickname.

More than halfway through the season, the team sits at 4-4-2 and 1-0 in the Ivy League. The team is currently 1-1 at their temporary home pitch––including their opening Ivy win over Cornell. So far, Bartholomew has been pleased with the work her team has accomplished without a home field.

"It's tiring, having to travel all the time," Bartholomew said. "But the girls have been able to manage and handle it. The girls have taken on the fact that we have to be road warriors this year. I give them a lot of credit."

With only one more "home" game at Fairleigh Dickinson, a non-conference clash with Lafayette on Oct. 11, the team will have to wait a little longer before its first match at Rocco B. Commisso Soccer Stadium against Princeton on Oct. 15.

Until then, Bartholomew's squad will continue to be Columbia's road warriors.