A window into history: When football beat Wagner to end the streak

A window into history: When football beat Wagner to end the streak 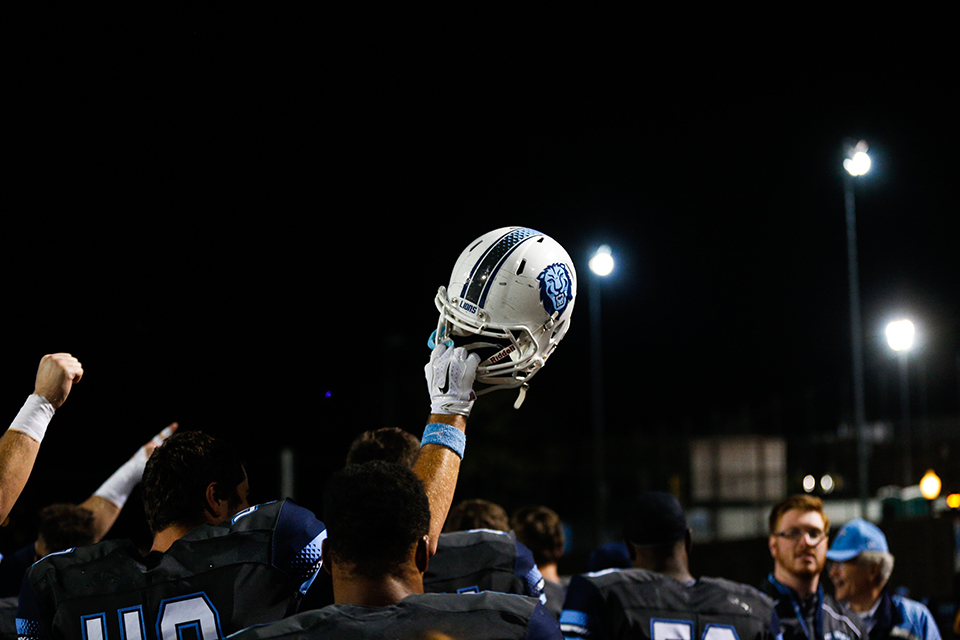 Heading into a rematch against Wagner, the Lions will look once again to claim their first win of the season. Spec 139's coverage team from 2015 reflects on what made the victory so significant.

What are your enduring memories from last year's victory over Wagner?

When a prolific team (see: Harvard Crimson 2010-2017) crushes an inferior opponent, there's a sort of cool, collected aura to the performance. But when a team like Columbia takes the lead, it's a very different vibe. There's a frenetic energy that starts on the field and reverberates up into the stands (it doesn't matter if there are 200 or 20,000 fans). You can see it in the press box and on the sideline with the coaches. That's what I remember the most.

In the post-game interview, then-junior linebacker Gianmarco Rea summed up the locker room atmosphere in one word: "Mayhem."

Samantha Cooney, Spec's 139th managing editor: I had been busy throughout the game—editing our coverage, posting to social media, prepping newsletters, and making sure everything else ran smoothly—so the victory didn't really sink in until we had posted our rapid recap as soon as the clock ran down. We ran the recap with the headline "We Win," a nod to the banner headline from Spectator's front page when Columbia snapped its 44-game losing streak in 1988. It had a beautiful lede from Ben Drachman that perfectly summarized the significance of the moment.

Thinking back to that game now, what sticks out is how proud I am of how our reporters covered it—they captured the environment up at Baker, put the game in context, and explained how the Lions secured the win. Leading that coverage remains one of my favorite moments from my time at Spectator.

Mel Chafart, Spec sports staff writer: More than anything else, I remember how fun it was to cover a winning game. I mean, we were just dominant in the first half, and it was so exciting to see a team that was normally so bad, do so well. I remember thinking, "Is this how the Harvard Crimson feels when they play us?"

Were you expecting Columbia to win?

Kyle Perrotti, Spec's 139th sports editor: I think so. Wagner had a really rough-looking squad, and Lord knows the team was due. I found it hard to believe Columbia wasn't going to come away with a win during Bagnoli's inaugural season, and aside from Cornell (I know, I know) this was the one that was clearly winnable.

Sam: After training camp, it was pretty clear that Columbia was more than capable of winning at least one game this season, and we knew that the win was going to be a big deal if it happened. So before the first game, we had planned out the types of stories we wanted to write to commemorate the end of the losing streak. We were more than prepared if a game finally went the Lions' way.

We thought the victory might come earlier in the season against Georgetown, but after the Lions took the 'L' in that game, Wagner seemed like the opponent that the Lions were best suited to beat. They were evenly matched on paper, and Wagner hadn't won a game yet. So both teams were going to be hungry for the 'W.'

And as a journalist, you couldn't ask for a more perfect narrative: The game against Wagner happened the same weekend that the Lions broke their 44-game losing streak in 1988.

Benjamin: Let's back up a bit to the Georgetown game two weeks earlier. I was pretty sure that Columbia would take that game in commanding fashion (and I let my friends at Georgetown know). It was pretty sobering when Lions couldn't keep pace. To be honest, I kind of burned some bridges with my Hoya friends after the 24-16 final.

So my optimism was tempered going into the Wagner game. Objectively, we had a shot—the Seahawks were looking pretty unimpressive in the wake of a big athletic shake-up—but emotionally, I was pretty ready for loss number 24.

Mel: Beforehand, not really, no. I felt as though this was just another hyped-up opportunity, and I had no idea of the quality of Wagner. We hadn't played them before. We had no idea what to expect from this team from Staten Island.

At what point in the game did you know the losing streak was going to come to an end?

Sam: At halftime, I was pretty sure the Lions were going to hold on for the win. But you never know when a team could collapse à la the Toronto Maple Leafs in Game 7 of the 2013 Eastern Conference Quarterfinals. Ultimately, though, Wagner never really posed a significant threat to the Lions in the second half.

Benjamin: Before Wagner completely melted down, Skyler Mornhinweg made a play that really gave me a lot of confidence. It was a third-and-10 from the Wagner 40-yard line in the first quarter, and the O-line just collapsed. Mornhinweg escaped a tackle, scrambled towards the sideline, and threw across his body for a 16-yard completion to a leaping Cameron Dunn.

Mornhinweg is not an elite quarterback, but this was a pretty excellent play. I thought: If he can just keep this level up, they'll really win this thing.

Mel: Midway through the first quarter, when Max Keefe, CC '16, scooped up a fumble at the Wagner two-yard line and ran it into in the end zone, I had a pretty good idea they were going to keep it going. The first quarter was a roller coaster, and for once we were on the better end of it.

How did the win change covering the team for the rest of the year? And the Yale win specifically?

Kyle: Covering the team was actually pretty interesting all year. As you may recall, their only really bad loss was the Homecoming game against Penn. The team fought hard in some other games, so it was at least more interesting than covering the team during the dreadful end of [Pete] Mangurian's tenure. On that note, it got a lot more interesting. Especially not being at the game, I had hoped I would cover a Light Blue win. And they came through at Yale. Yale looked bad that game, but the Lions showed a will to win I hadn't seen… umm… ever.

Sam: For any sport Spec covered, regardless of the team's record, we always aimed to explain why the Lions won or lost a given game and then contextualize each win or loss in the narrative of the season. For football, that didn't change after Wagner. This was never a team that was supposed to come out on top of the Ivy League—they were going to be lucky to win one or two games. I thought that a second win might come against Cornell, the only Ivy team ranked below the Lions in the preseason rankings. (Spoiler alert: It didn't).

The Lions weren't supposed to beat Yale. The Bulldogs were ranked as the third-best team in the conference in the preseason and had a winning record going into the game against Columbia. And no one was really paying attention to the matchup—it was away in New Haven and during the weekend of fall break. So, when the Lions came out strong from the outset, I think everyone was surprised. We definitely saw a significant spike in how many people were tuning in to our live coverage once the Lions started racking up points.

Benjamin: Echoing Kyle, after that game, Columbia played all their opponents (except for Penn) to within a single possession. That's pretty awesome. But on top of that, there was a bit of confidence you could see in the team. The team may not have played with swagger, but they at least played with pride (or to put it more bluntly: like they weren't embarrassed). That really showed in gritty games like the Yale win or the blow-for-blow duel against Dartmouth.