An inside look at the kicks that took down Wagner

An inside look at the kicks that took down Wagner 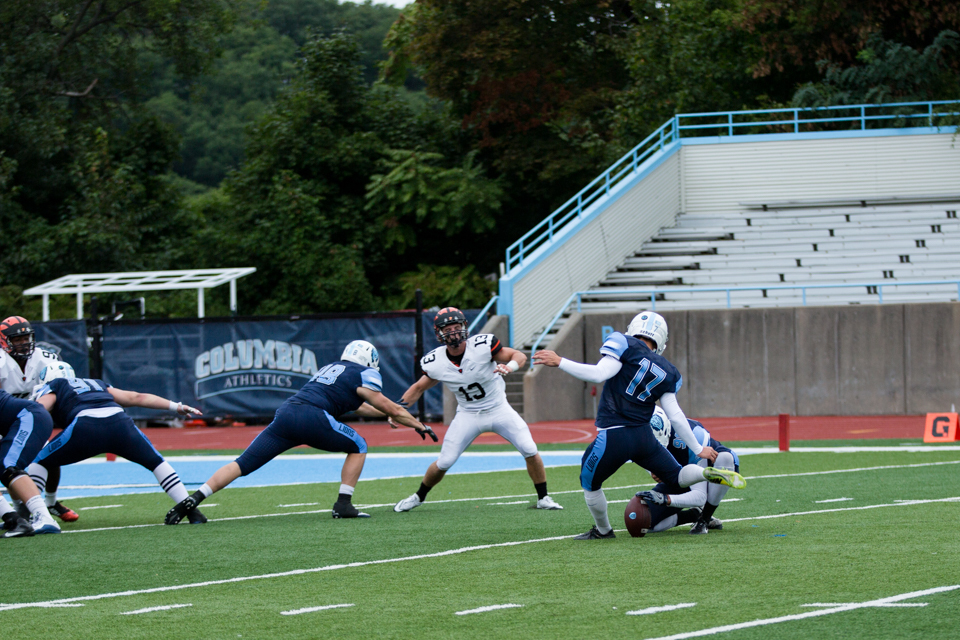 This is the fifth entry of the football diaries, where a member of the football team will share weekly insights on the team, both on and off the field. The endeavor is part of "From the Lion's Mouth," Spectator's initiative to allow athletes and alumni to share their athletic experiences.

After regular contributor senior wide-out Scooter Hollis was injured during the Lions' game against Wagner, Spectator sat down with first-year kicker Oren Milstein.

Milstein hit five field goals, including the game-winner in the final five minutes, to lead the Light Blue (1-3) to a 15-13 win against the Seahawks (3-2).

I've played soccer since I was four years old, so I've always had that natural lower body athleticism. I was playing safety for my middle school team, and in eighth grade we needed someone to kick a ball—and I had a soccer background, so I just tried it and ended up being pretty good at it. [After that] I just stuck with it and trained a lot, and now I'm here playing college football.

I started the Princeton game the week before [the Wagner game]. I came in for the Georgetown game for second half the week before, and I made my kicks. Coaches actually didn't tell me, they just posted it on the special teams depth-chart in the locker room, and it was just time to go to work at practice.

With the Light Blue having lost its opening three games, and trailing Wagner 13-12 with fewer than five minutes in the game, Milstein was called on to rise to the occasion and make a 36 yard kick.

It was our first win of the season, so it was a full-team celebration. Everyone was really excited, so they put some music on. They lifted me up a couple times, but it's more important that we got our win. Everyone is celebrating. Everyone is happy. It was a really great moment for our whole team.

I've never kicked five field goals in a game before—let alone one of them being a game-winner in the fourth quarter. I had a game winner in high school, but it does not compare to this last week.

From the Lion's Mouth