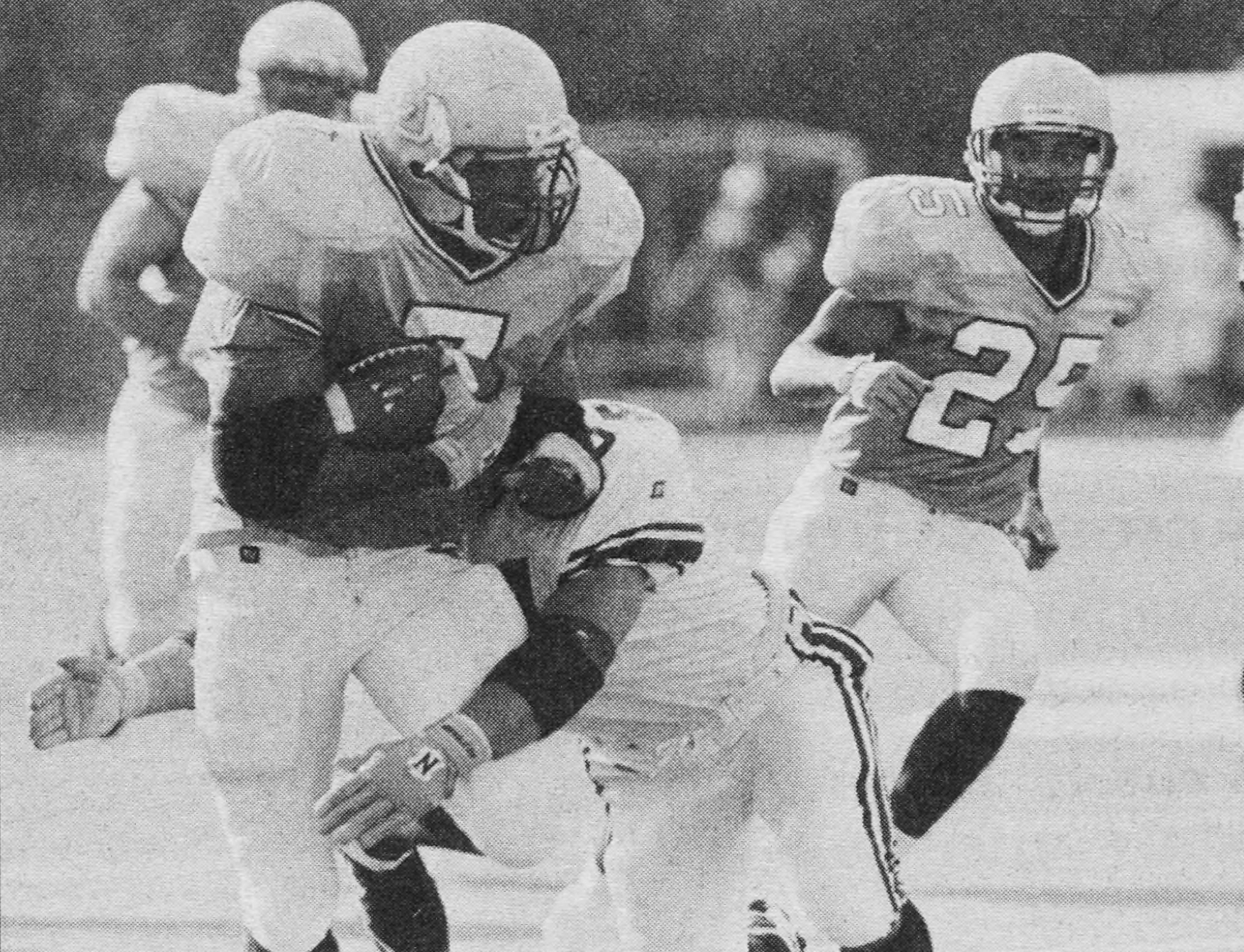 Sixteen years ago, Columbia football won its Homecoming game, dispatching Dartmouth 49-21 in 2000. That was the last time students and alumni celebrated a Lions victory on Homecoming, as running back Johnathan Reese set two program rushing records behind a 239-yard, four-touchdown afternoon.

Johnathan Reese, CC '02: I just remember it being Homecoming, and Dartmouth was somebody I knew we could beat. It was like, 'We need to go in and win this—it's Homecoming. Why are we not winning Homecoming games?' I just went out, and I just wanted to play. It turned out a lot of other people wanted to play that day, too.

Michael Mirer, CC '02, Spectator's 125th Editor-in-Chief: The general feeling around the press box was incredible; it was a dominant performance. We weren't used to Columbia coming out and executing that way. And, Dartmouth was sort of the troubling team for Columbia so for many years, so, to drag them down the field like that was really impressive.

Phil Wallace, CC '04, WKCR assistant: We just destroyed Dartmouth, and Johnathan Reese just ran all over them. And I was working the game—you know, stat guy, studio guy—and I remember that was maybe the biggest crowd I ever saw for a Columbia football game. It was a beautiful fall day, could see the fall foliage, see the river—there were 9,000-plus people there.

Jarel Cockburn, CC '02, wide receiver: At homecoming, it's always electric… The team of the century was there, and everybody just wanted to put on a good show.

Kirby Mack, CC '01, linebacker: We knew there was going to be a lot of people in town to watch that game that might have not have otherwise been there, due to the unveiling of the All-Century team, so that included names like Gluckman, there was someone, the oldest living member of Columbia's 1934 multiple championship team. He was introduced, and then Marcellus Wiley, who everybody knows and loves, he was part of that team as well, and I believe Rory Wilfork, who was at the game.

Mack: I'm able to jump an out route and return it 40 yards, and then that sets up Johnathan for the first of his four scores that day,

Reese: I'm glad Kirby picked it off, but he didn't take it to the house, I think. That gave us an offensive chance, and we ran a play that I used to run in high school. That was kind of like a quick pitch, and I just cut it in—my reaction was "yup, we['re] winning this game today." That was my first touchdown.

Mack: That kind of… was a catalyst for the rest of the day for him, which was one of the more amazing days in school history. 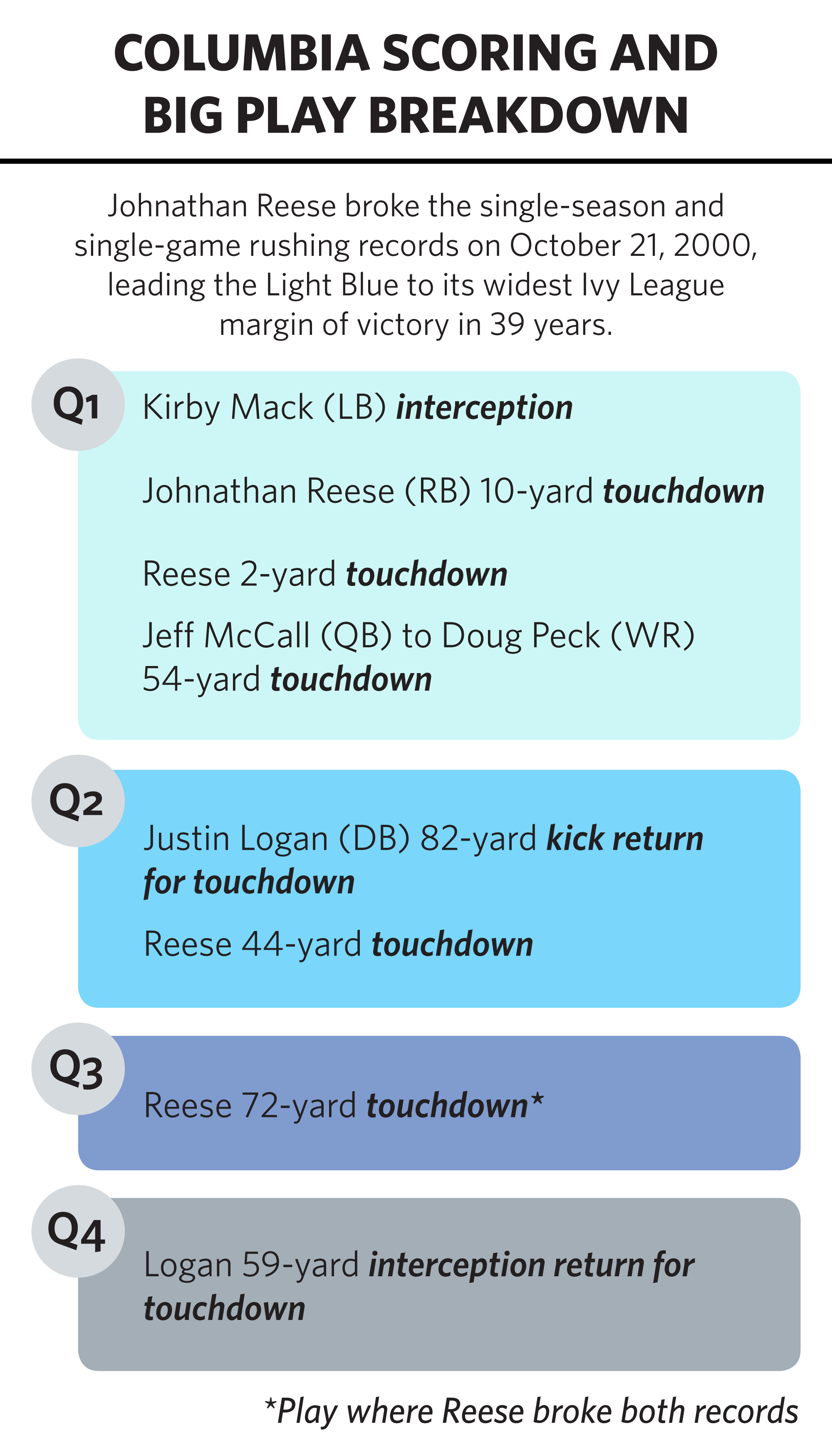 Max Dickstein, CC '01, former Spectator Senior Writer, wrote in 2000: Junior quarterback Jeff McCall underthrew sophomore receiver Doug Peck. But by cutting in from the right sideline to make the catch, Peck evaded two Dartmouth defensemen and scampered the rest of the 54 yards to the end zone.

Reese: Jeff McCall at QB, the receivers we had, Doug Peck and Jarelle Coburn, they were just on fire. If they had to focus on those two deep threats, and Jeff threw some amazing passes, then I'm free. I just found the holes that the offense gave me.

Mirer: I actually had a history seminar with a lot of football players, with Reese and McCall, and McCall is also a Detroit public school kid, so I had that in common with him. I liked all those guys, and I had good relationships with [them]. Reese was a quiet guy, and he didn't talk a lot. He only spoke at press conferences.

Reese: Kirby's my big cousin, my big brother as well. It only could have happened the way that it did, and when he transferred up from Virginia and I got into Columbia as well, that was where I was going. Kirby led the way.

We recruited him out of high school, and he walked on at Virginia. It just didn't work out after a year or two, so we got him in as a transfer.

Wallace: It was really all about Reese, and I'll never forget the marching band used to have this cheer: "Buy rent, sell lease, give the ball to Johnathan Reese."

Mack: I think anytime you're talking about big time players, they feed on those moments, and it's not necessarily anything out of the norm where they have to elevate their play to a certain level; I think it's just part of their DNA and who they are, and they just focus in on getting the job done, and he certainly did that that day.

Dickstein: Logan received the kickoff after the second Dartmouth score. Reese quickly threw a powerful block that leveled a Dartmouth player who might have stopped Logan early.

Justin Logan, CC '02, defensive back: We always had talked about how long it had been since we returned a kick. It had been something like 20 years.

We were going left, and John and I were the two return men. John was one of the top in the nation at returning, so that was good for me because I was able to get a lot of action. They didn't want to kick to him.

Tellier: It was one of his buddies, Justin Logan. That was one of his best friends, and when he returned, it [Johnathan] just KO'd a guy. He was a tough kid alright. Logan went 90 or something like that—it was a long run.

Dickstein: With 1:10 left in the half, Reese broke away 44 yards for his third touchdown. Columbia was three touchdowns ahead, and Dartmouth would not get any closer.

Reese: The touchdown I scored before halftime made sure that Dartmouth wasn't coming back. The name of the play was 'Truck,' or something like that. Basically, all the linemen pulled to get me on the edge, and I kind of slow-played it, waited until it opened up. Then I saw a lane, and I took it. It was just fun getting down the field.

Mirer: He was big and fast. He was Ivy League-fast. When he got in the open field, he could run right by you. He could get past people. I don't think of him being especially shifty, but he was big, so he could get through the line and make you miss. He was sort of perfect for the Columbia offense.

Tellier: He could make people miss and beat people to the edge of the defense. He was a good pass receiver out of the backfield, and he could pass protect, too. A real tough kid, and if you asked him to pass protect, he did that well. He was a tough kid. He played every down, and I don't ever remember him missing a game in four years.

Dickstein: For the first 10 minutes of the third quarter, the two teams traded sputtering drives, until Reese ignited his longest burst of the day, a breathless 72-yard sideline sprint during which the junior broke O'Connor's and Jackson's records.

Reese: I had no idea [about the record]. I guess we were up, so they just sat me down for most of the fourth quarter, then Dan Reed came in there, he just rocked it for a little while.

Wallace: He was three yards away from breaking Lou Kusserow's all-time Columbia rushing record, and they took him out of the game. I think Ray Tellier admitted that he didn't know after the game, but the entire rest of the game the [WKCR commentators] were just going off on Columbia, like, 'How can you not put him in and let him break the record, like, what the hell are they thinking?'

Tellier: I don't remember exactly when he had the record. Someone got word [about the career record]. Our coaches in the press box heard it from one of the play-by-play announcers.

Dickstein: Columbia scored once more when Logan intercepted a Smith pass in the fourth quarter and ran 59 yards for his second touchdown and a 49-14 Columbia lead. With the game already decided, Dartmouth controlled the ball for the last four minutes, finally scoring on a quarterback scramble with no time on the clock.