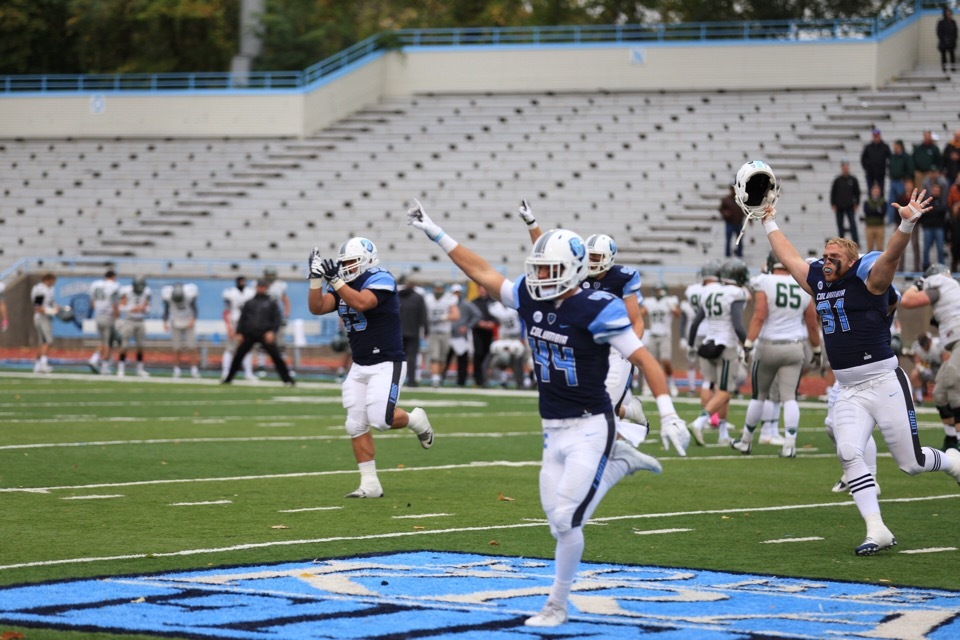 "I was just as scared as everybody else when they were lining up for that field goal," senior safety Brock Kenyon said. "But God was looking out for us, and we came out with the victory, so it was awesome."

The Big Green (3-3, 0-3 Ivy) began the drive at the one-yard line, and quarterback Jack Heneghan marched his squad all the way to the Columbia 30-yard line with less than a minute remaining.

A trio of incompletions followed, forcing Smith to convert from 47 yards amid a blustery afternoon at Robert K. Kraft Field. The kick landed in the back of the endzone, and Columbia (2-4, 1-2 Ivy) prevailed on Homecoming for the first time since 2000.

First-year kicker Oren Milstein had all of Columbia's nine points, converting three of four attempts on the day. And following his performance against Wagner, it marks the second time in Milstein's short career where he's led the Light Blue to a win exclusively on field goals.

But it was the Light Blue defense which set the tone for the low-scoring affair, especially in the second half. Dartmouth finished with just 153 total yards during those final two periods and did not convert a third down. Heneghan—who entered the day second in the Ivy League in passing yards per game—managed just 86 yards in the final two quarters. He finished 13-for-38 for 242 yards with a touchdown and an interception.

"We are trying to establish ourselves as one of the best defensive teams in this league, and I thought today when they had to stand up, they did," head coach Al Bagnoli said. "It's kudos to them. Paul Ferraro and the staff have done a great job, and the kids have bought in."

The defense also helped set up the go-ahead score, forcing a Dartmouth punt from its own six-yard line midway through the third quarter. The Lions had only to drive 27 yards to set up Milstein's 33-yard score with 1:05 left in the period.

Milstein later had an opportunity to extend the lead in the fourth quarter, but his 38-yard attempt sailed wide left.

Dartmouth took over on its own 21-yard line, and proceeded to punt it back to Columbia. A six-play, 24-yard drive ensued, with Matthew Panton able to pin the Big Green inside their own one-yard line.

Ryder Stone took the handoff on the next play from scrimmage for the Big Green, and for a moment, the Lions thought they had a safety. After couple of errant throws from Heneghan, Dartmouth was facing a miracle scenario: Fourth-and-10 from its own one-yard line.

Somehow, Heneghan found time to loft it over the middle to Hunter Hagdorn. The Dartmouth wideout corralled it for 23 yards to keep the drive alive. Hagdorn later hauled in a 26-yard pass on the final series, capping a marvelous Saturday afternoon. He finished with three catches for 114 yards including a 65-yard touchdown midway through the second quarter.

That was the only touchdown of the afternoon, which handed the Big Green a 7-3 advantage entering the half.

Milstein responded with 9:05 left in the third quarter, converting on a 20-yard field goal to trim the deficit to 7-6. Columbia had marched all the way down to the 3-yard line, highlighted by a 20-yard run for first-year quarterback Hunter Petlansky.

Dartmouth failed to respond, once again stifled by the fearsome Columbia defense. The game became a battle of field position, and Milstein proved to be the difference, ending a seven-year losing streak to the Big Green.

"I couldn't be happier for our kids and our alumni base and for the entire Columbia football community," Bagnoli said. "I thought it was an awesome win, and obviously nobody left early given the suspense of it."