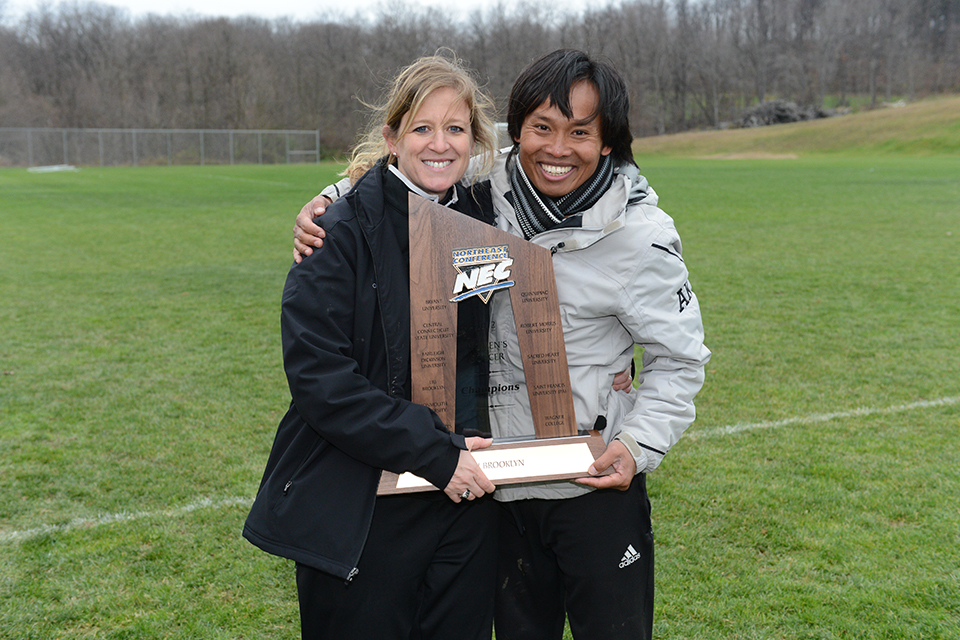 When women's soccer head coach Tracey Bartholomew came to Morningside Heights in the winter of 2013, she wondered whether her long-time assistant Amphone Keovongmanysar would also make the trip.

The duo had worked together at LIU Brooklyn for 14 years, helping the Blackbirds earn a trio of conference titles and NCAA College Cup appearances. But Keovongmanysar now had an opportunity to replace his old boss, and, for most assistants, the lure of becoming a head coach proves too tempting to resist.

Instead—as Bartholomew began to build a new staff just weeks after having a baby— Keovongmanysar opted to stick with the person whom he calls his "work spouse."

"People look out for each other," Keovongmanysar said. "That's something Tracey and I have always been about, and that's the bond that's always kept us… because we're best friends and family.

That bond has helped push Columbia to the brink of a conference title this fall, buoyed by the Lions' first-ever 4-0 start to Ivy play.

But three years ago, Bartholomew and Keovongmanysar inherited a program that, historically, had struggled. The Light Blue has claimed just one Ivy title in its history, with just two seasons of four or more conference wins in the past 20 years.

"I've played against Columbia for a long time, and I've seen the level of talent here and all of those things," Bartholomew said. "I felt that there was no reason why these women couldn't be successful. They just had to put the puzzle together."

Upon her arrival, Bartholomew first sought to raise team expectations. While the Lions were far from Ivy juggernaut at the time, she noted that talk of an Ivy title sounded foreign to a program that hadn't been champions since 2006.

Along with that belief came a renewed emphasis on hard work, which began in practice. Bartholomew and Keovongmanysar stressed competition on the training pitch, implementing opportunities to battle one-on-one. Those situations help teammates push each other to be better players and raise what Bartholomew labeled as "the work rate" for the entire squad.

"Something I noticed was that we would do sprinting exercises, and people wouldn't touch the lines," Bartholomew added. "Every time you do that, you're not only cheating yourself; you're actually cheating the team, because you don't have that expectation that we're all working as hard as each other… whether you're playing 90 minutes or not."

The Lions have built on that tenacity and discipline, even in spite of a new conference rule that requires a period of rest in the offseason. Bartholomew explained that her players, itching to spend the day on the training pitch, want to wake up early in the morning.

"We've got a handful of players that just say, "Hey, let's play!" Bartholomew said. "It changes your outlook on it. … We just try to have some fun with games here and there that they enjoy."

Bartholomew often rotates between offense and defense during practice, with Keovongmanysar presiding over the backline—one of the best in the entire conference. The Lions have allowed just 15 goals combined in Ivy play since 2014, including a mere two this fall. Meanwhile, the Light Blue conceded 13 times in conference in the 2013 season alone.

But according to Dan Lobacz—Columbia's assistant director of sports information from 2008 to 2011—the biggest reason why the Light Blue sits in second place in the Ivy League extends beyond the pitch.

He pointed to a lack of "team bonding"  during his time in Morningside Heights, and following a few seasons alongside both coaches at LIU Brooklyn, Lobacz explained that the Lions now boast an impressive chemistry.

Tailgates and other off-the-field activities help promote a strong team camaraderie. But, ultimately, the example is set by both coaches, who first met at a teaching clinic in 2000.

Despite their strong relationship now, Keovongmanysar was initially reluctant to join Bartholomew's staff at LIU Brooklyn, citing his desire to become a teacher back home in Massachusetts.

The Laos-born assistant later took a job on Bartholomew's staff with the Blackbirds, heeding the advice of his family to enter coaching. But their journey together didn't begin smoothly. In the aftermath of Sept. 11, LIU Brooklyn lost all of its recruits and even some players.

Keovongmanysar's family urged him to part ways with Bartholomew at the time, but he felt a sense of "unfinished business" and weathered the storm along with her. Five years later, the pair led the Blackbirds to their first conference title in nearly a decade. Two more conference championships followed under their stewardship, highlighted by Bartholomew winning NEC coach of the year in 2008.

Those titles gave LIU Brooklyn berths into the NCAA Tournament, with Bartholomew and Keovongmanysar last competing in 2012. A victory against Harvard this weekend would go a long way toward a return trip, yet both coaches maintain that the journey isn't about personal glory—it's about sharing the euphoric moments with the important people in their lives.

"I never got into coaching for myself... and I think he's the same way," Bartholomew said. "When I'm here to help the players hopefully become a family themselves and achieve great things... You see just how truly amazing sports can be and how empowering it can be for women."