Reflections on the wrestling team from a former Columbia wrestling coach

Reflections on the wrestling team from a former Columbia wrestling coach 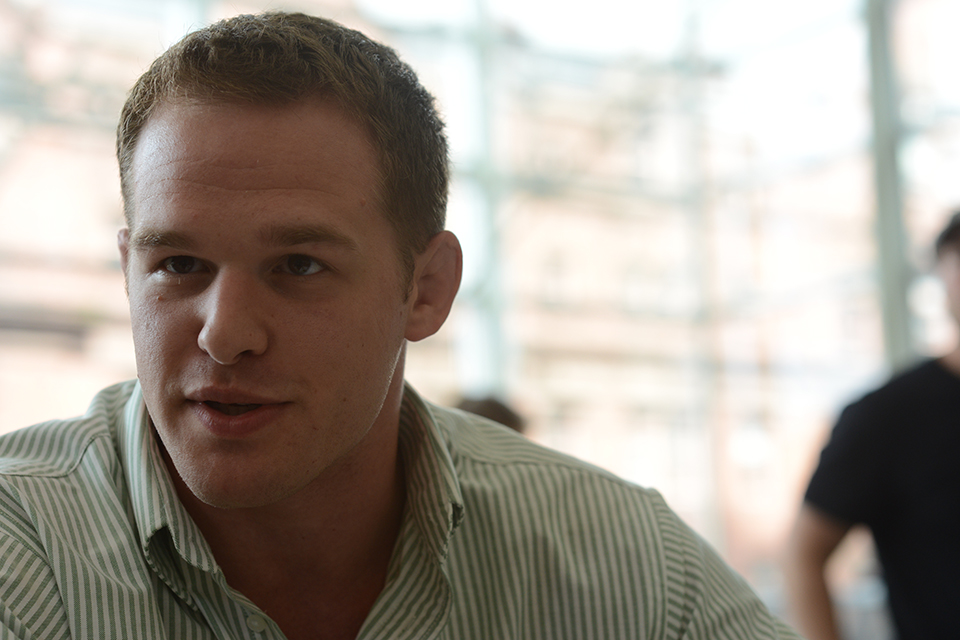 Hudson Taylor served as an assistant coach at Columbia from 2010-2014, and is the founder and executive director of Athlete Ally.

I started as a volunteer coach of the Columbia wrestling team in 2010. It was in the early days of Athlete Ally, a nonprofit I launched that year to engage athletes in the fight for LGBT equality. Columbia seemed like a perfect fit for me—a progressive institution with strong student activism and social justice values. Our assistant coach at the time and eventual head coach, Carl Fronhofer, and his partner were outspoken LGBT allies. I remember seeing their NOH8 Campaign photo go up on Facebook and thinking to myself, "This will work out well."

Over the next three years, I coached part-time while building Athlete Ally. I spoke to the team about my work and the important role athletes play in either perpetuating or dismantling systems of bias and oppression. As a result of going through CU Safe Zone training, the Columbia wrestling office proudly displayed a Safe Zone program sticker in the form of a rainbow flag on our door. Our locker room wasn't Donald Trump's locker room—at least as far as I could tell. The guys minded their words in front of the coaches and seemed genuinely in tune with the values of inclusion and respect I promoted through Athlete Ally.

The Class of 2017 were first-years in my final year coaching. The contents of their group chat, which I had no idea existed, came as a chilling shock to me—honestly similar to the shock of last week's election. It exposed an ugly underbelly I could have guessed was there but didn't see. Maybe we were looking in the wrong places. Maybe our privilege blinded us. Maybe our vigilance pushed that kind of language out of the locker room and into cyberspace. Maybe our conversations focused too much on optics and not enough on attitudes. Maybe we talked too much to them and not enough with them. And now, we're left asking why and what to do about it.

For months, people on both sides of the political aisle have been saying that a vote for Trump was a vote for racism—if not to advance it, certainly to accept it. The same goes for the comments in the wrestlers' group chat. Their words represent either support for or complacency about racism, sexism, and anti-LGBT bigotry, and thereby present a serious public safety concern to women, people of color, and LGBT community members at Columbia and Barnard. Their words also present a need for fundamental soul-searching across the wrestling community, because if it's happening at Columbia, I'm willing to wager it's happening in almost every athletic department across the country. It happened at the University of Maryland, and that's what compelled me to become a social justice activist.

Knowing the wrestling community well, I expect some folks out there to reject this scandal based on privacy protections. I can hear the claims now: This violates privacy and polices expression. The group chat, after all, was for a small group of teammates. Was there harm if a wrestler expressed "hope" among his teammates that "someone actually gets sexually assaulted," as one message stated? Yes, and if you're going to argue otherwise by reaching for straws around privacy rights and invoking Orwellian metaphors without a care for the real impact of these words, you're doing wrestling and every sport in this country a profound disservice.

Wrestlers are never ones to deflect blame on others. We accept the consequences of our actions and strive for continuous improvement. If we accept fault when it comes to performance on a mat, we better be able to do the same when it comes to our character and community conduct.

Recent surveys show that one in five women experience sexual assault on college campuses. Let me repeat that: Women must assume a 20 percent chance of experiencing sexual assault when they step onto campus for orientation in their first year. At best, the wrestling team is condoning that fact, at worst, they are promoting it. At the University of North Dakota last week, students posted photographs of themselves in blackface to social media twice in a 48-hour period. The same expression of anti-black racism occurred at Kansas State University and Quinnipiac University. At San Jose State University, dorms are being littered with swastikas. Swastikas. The Trevor Project, a national LGBT suicide prevention hotline, received more calls, texts, and online chats on Wednesday than it's gotten on a single day in four years, more than double its normal daily volume.

Every day a new college enters a state of emergency with regard to how women, people of color, and LGBT folks are treated on campus. These are not new issues to Columbia, but this latest event must move the University to comprehensive action—action not only with respect to the wrestling program but also to the campus culture at large. The punishment imposed on those involved and the restoration that follows cannot only be about individual consequences—they must be about ending these forms of oppression at the institutional and structural levels.

Since the news broke, I have been in touch with past coaches, alumni, and members of the current Columbia wrestling community. Their common questions are: Where does the program go from here (beyond the punishment imposed)? How can Columbia and the wrestling team ensure that these attitudes and behaviors stop in their tracks? How can apology today lay the groundwork for cultural competency and restoration tomorrow?

The answers start with the entire program, not just individual offenders, taking responsibility for the full scope of the harms they caused. As a former Columbia wrestling coach, I bear some responsibility for the actions of these wrestlers. They are a reflection of our culture and my coaching. I apologize to the Columbia campus, to the alumni, and to my former wrestlers for not doing more to develop them into young men of better character.

From there, the wrestling program must pursue a path for deferential and humble listening across the communities most impacted by their comments. They must engage in difficult dialogue and learn to understand how their conduct relates to systemic oppression. They must take responsibility for not only what they have done today but also for the future bigotry they have enabled.

My hope is that Columbia's athletic department uses this experience to understand and promote social justice values and establishes Columbia as a model for every school across the country. Very few athletic departments are getting this right, and, in the calcified institution of college sports, real change is a long haul. But, every heinous incident is an opportunity for reformation. Columbia must take the reins and lead by example.

The author is the founder and executive director of Athlete Ally and was a Columbia wrestling assistant coach from 2010 to 2014. Athlete Ally is a nonprofit developed to educate and activate athletic communities to eliminate homophobia and transphobia in sports and to exercise their leadership to champion LGBT equality.