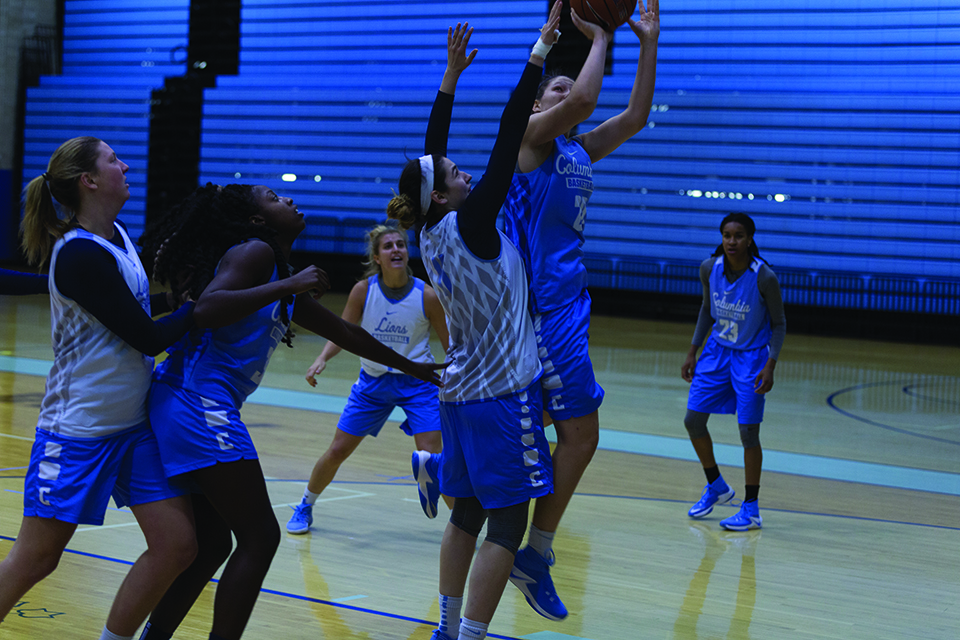 Senior forward Tori Oliver calls it the first post, but for the casual observer, it's a full-on race.

"Whoever gets down the court first has the lane to post or get a one-on-one look," Oliver said. "So, Camille [Zimmerman] and I are always racing down the floor."

For all of their battles for offensive position, Oliver and Zimmerman remain resolute that their on-court relationship will improve with the help of the new coaching staff this year. But whether the two All-Ivy performers can truly coexist is perhaps the most burning question facing head coach Megan Griffith, who inherits a team with a promising, yet puzzling track record.

A year ago, the Lions set a program record with 11 nonconference wins before slumping to last place in the Ivy League with a 1-13 record.

Zimmerman and Oliver return to the fold as the two most decorated players, having finished in the top two in points and rebounds in 2015-16. But in that season, Zimmerman's success appeared to come at the expense of Oliver's, as the sophomore forward posted a team-high 14.4 points and 7.3 rebounds per game.

Meanwhile, Oliver posted 10.0 points and 5.1 rebounds per game, a far cry from her numbers in 2014-15. Under then-head coach Stephanie Glance, Oliver earned second-team All-Ivy honors after leading the conference with 16.5 points per contest.

"I know my freshman year, Tori would have an amazing game, and then I would have a terrible game," Zimmerman said. "Then the next day, I would have a good game and Tori, not so much. It's about both of us having to have good games together, and that way defenders really can't guard you because you can't really double team one person."

Though consistency has been an issue, the greater dilemma is how two ball-dominant forwards can share the floor together. A year ago, Oliver played fewer minutes than in any other season of her career to allow Zimmerman to flourish—a move that Doug Feinberg, the Associated Press' national women's college basketball writer, disagrees with.

"Their games are similar, but they have to find ways to make it work," he said. "When you're a coach, you want to put your five best players on the court, whether it's five guards or five centers."

Griffith explained that she foresees Zimmerman in the high post and Oliver in the low post, with each player in position to highlight her particular strengths. After all, Zimmerman shot nearly 47 percent from the field last year and 38 percent from beyond the arc in far fewer attempts. That leaves Oliver to use her strength to power her way to the basket past almost anyone in the Ivy League.

"She wants to attack, and I don't think anyone in the Ivy League can stop that," senior center Devon Roeper said. "But I think having other girls that are able to do similar things or shoot the ball—where if the defense starts to key in on Tori—[is important]."

Junior guard Alexa Giuliano—already third in program history in three-pointers made—is one player that complements Oliver's hard-charging style. But in the first pair of contests, it's been sophomore guard Paige Tippett who has seen the bulk of action.

Tippet is able to spread the floor with her range from beyond the arc, but the Lions' offense truly hinges on her backcourt partner in sophomore Paulina Körner.

Körner saw action largely as a backup a year ago but has impressed with her conditioning and ability to attack defenses thus far this fall. Her best outing came in a 65-58 road victory over Richmond, scoring a career-high 18 points on 9-for-10 shooting from the charity stripe.

Still, it's a tall task for the German native as she looks to replace long-entrenched starter Sara Mead, CC '16, at point guard. Mead had been the Lions' leader on and off the court, according to a trio of current upperclassmen, and they've all taken the vow to fill that leadership void.

But the more immediate challenge is how to replace the steady hand in the backcourt after Mead started all 28 games and led the team in assists. Koerner didn't finish too far behind, dishing the third-most assists on the team, though she'll have to prove that she can handle a massive jump in minutes from last year.

One reason for optimism comes from Griffith and her ability to mold guards. She wrote her name in the history books during her four years as a point guard at Columbia and, more recently, leading a stellar Princeton backcourt.

If she can work her magic again, the Lions may very well climb out of the cellar in the Ivy League. Last year's 1-13 mark suggests that an imposing challenge lies ahead, but the cupboard is far from bare for the Light Blue, with Griffith leading the charge to topple her former employer.