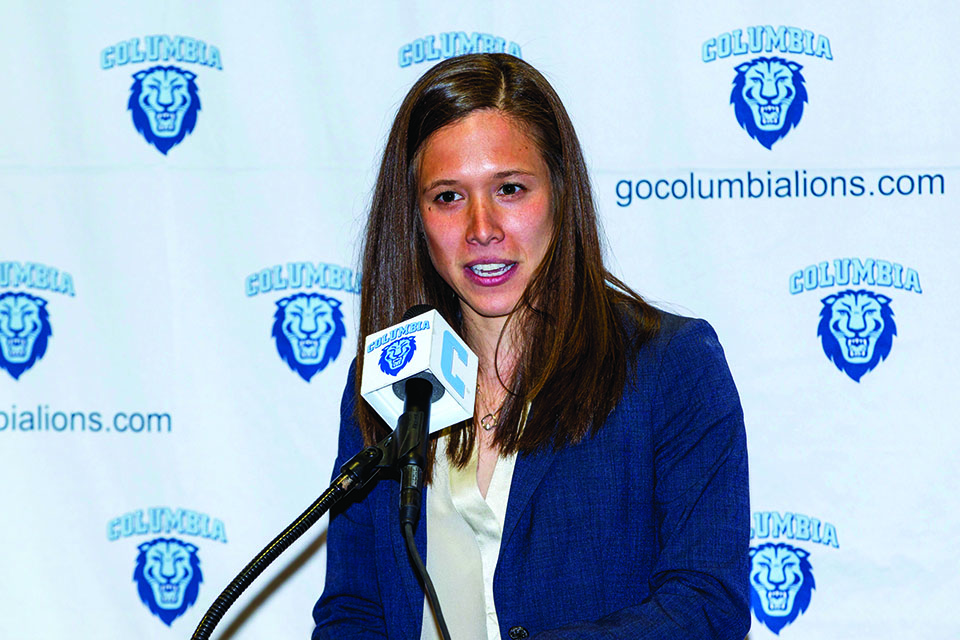 Megan Griffith was hired in March of this year, and has been characteristically pushing her team to improve ever since.

The duo had outlasted the rest of the squad during preseason conditioning drills until, finally, Koerner wanted to stop.

Griffith wanted to keep running, but she ultimately relented. Still, the message was clear: One of Columbia's all-time leading scorers was returning to campus to build the program into a perennial winner.

Former head coach Paul Nixon remembered his first meeting with Griffith in 2005 during his interview for the head coaching job. It was the spring of her sophomore year, and she was already a team captain.

"[She was] one of those players who was always in the gym," Nixon said. "We would have practice, but she would stay after practice playing one-on-one with the assistant coaches or a male practice player."

Griffith proceeded to captain the squad for two more seasons, tallying 700 of her 1,061 career points and leading the conference in assists in both 2006 and 2007. But for Nixon, it wasn't just Griffith's work ethic during games or practices that stood out.

Instead, he talked of a former player who was drawn to the basketball court, never afraid to join nine other people in Levien Gymnasium for a pickup game. On occasion, Griffith even offered to shoot 100 free throws with any teammate who had a bad practice.

But it wasn't until a Senior Night defeat to Brown that Nixon realized Griffith would one day become a coach.

"She spoke up in the locker room and just said, 'Hey, we can't get down right now. Over the past several weeks, this team has been playing really good basketball, and we played really good basketball tonight. We just happened to lose a really close game. We just got to pick ourselves back up because we're going to beat Yale,'" Nixon recalled.

True to Griffith's word, the Lions dispatched the Bulldogs 66-64 the following night. 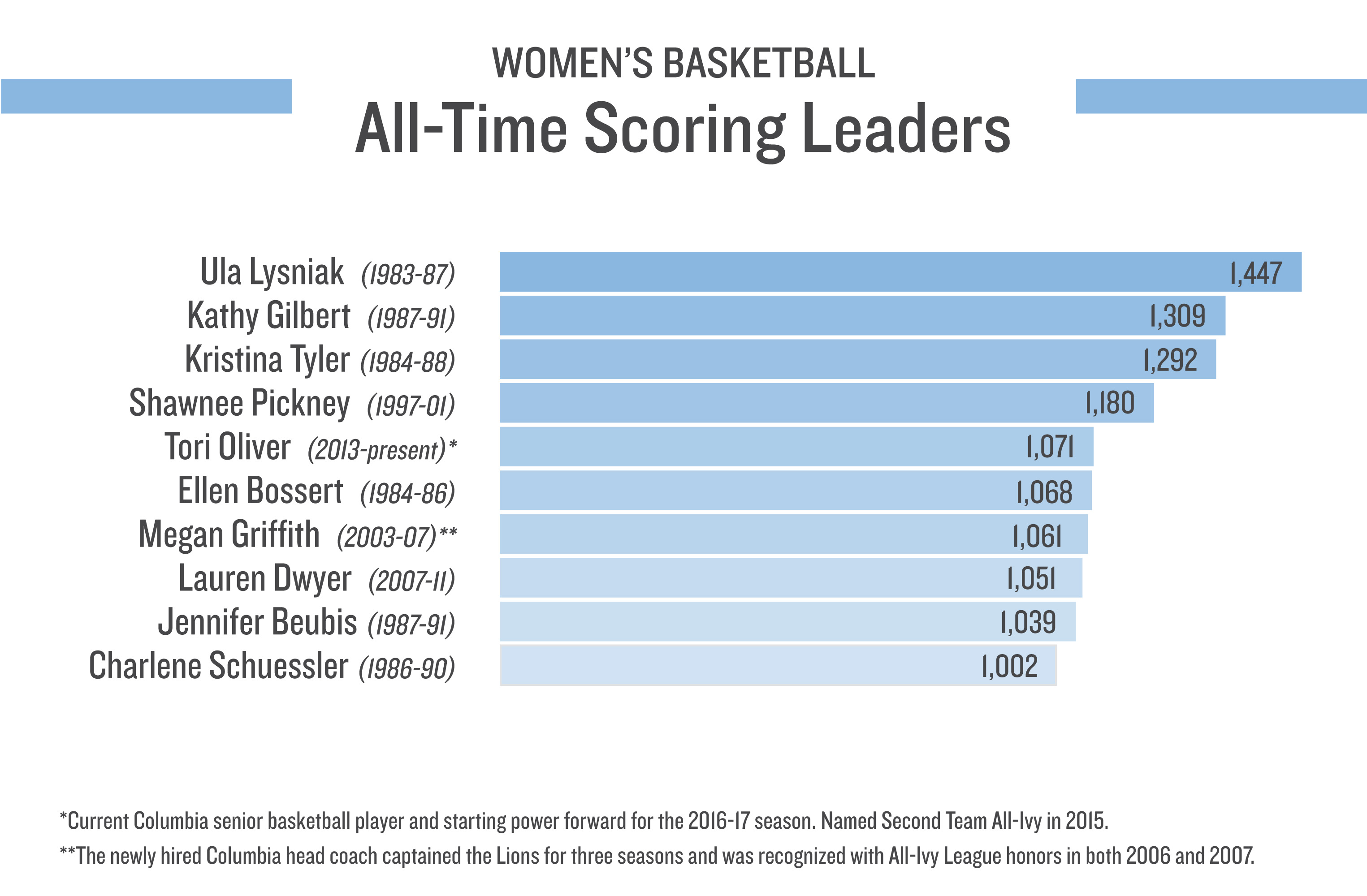 Griffith scored a team-high 14 points in the victory, but it wasn't long before she found herself at a crossroads. After interning with Lincoln Financial Group the summer after her junior year, Griffith, an economics major, already had a job lined up there. But with the game still pulling her, the decision between coaching, playing, and finance was not an easy one. At a three-way intersection, Griffith turned to her family for guidance.

"You can always work in a office, but you can't always play ball overseas," Bob Griffith, Megan's father, said. "I want you to follow your dreams."

Griffith called the firm back, declined their offer, and soon found herself on a plane to Finland where she'd be making only 1,000 euros a month with FoA Nice Basketball. She proceeded to win FoA Nice's team MVP award in her first season.

A year later, the King of Prussia, Pennsylvania native began to venture into coaching, working as a youth basketball coach at Honka Basketball Club. After moving to the Netherlands, she continued to play professionally while coaching three different youth teams.

But her stay in Groningen lasted only one year, with Griffith opting to return to the United States and interview for a position at Princeton.

Tigers head coach Courtney Banghart—who had a stellar playing career at Dartmouth—had been looking for another former Ivy player on her staff. After interviewing several other candidates, she chose Griffith to become the Tigers' next director of basketball operations.

"Going to Princeton was totally a professional move," Griffith reflected. "For me, you turn the blinders on and try to help your career."

Griffith spent two years as director of operations before becoming an assistant coach for four years on Banghart's staff. She primarily worked as the team's recruiting coordinator, but Griffith and Banghart—both former All-Ivy guards themselves—also worked together with a Princeton backcourt that took the nation by storm.

"I attached myself to very successful coaches [in other sports] that were already at Princeton, asked them how they managed both the academic calendar and the athletic challenges and having also walked in their shoes," Banghart noted.

Those conversations took place at the outset of Banghart's tenure 10 years ago, which has since spawned WNBA stars like Blake Dietrick. It wasn't too long before Columbia Athletic Director Peter Pilling came calling with an offer to return home.

Griffith jumped at the opportunity, becoming the third-youngest head coach in the nation at just 31 years old. As the Associated Press' Doug Feinberg explained, the former star guard was fast-tracked to the position, despite not having been on of Banghart's top assistants.

"But why not try it?" Feinberg said. "What's the worst thing that could happen? What is expected of your athletes is important, and she just got put in the Columbia Athletics Hall of Fame. It's unconventional, it's different, but she came from a successful Ivy League school."

While Griffith has spoken readily about returning home, her Princeton roots are still present. The Lions head coach remarked this month about how she emulated Banghart, reaching out to a group of Columbia's most successful coaches, including fencing's Michael Aufrichtig, baseball's Brett Boretti, and men's tennis' Howard Endelman, CC '87.

"You're going to get a different kind of kid," Griffith said. "It won't be easy at first, but you'll have to convince the players that the grind is worth it. When we get better we can compete against higher teams. But for those guys, they are transparent and stick to who they are."

Endelman, for one, believes that Griffith's Columbia background is a huge advantage on the recruiting trail. He mentioned how she is a living example of what four years inside the Morningside Heights gates can do for a prospective recruit.

That personal touch may seem trivial, but even from a brief conversation with current players, Griffith's knowledge of Columbia sets her apart. Whether it's sharing her Art Humanities experiences during the team's summer trip to Italy or discussing her old economics professors, Griffith has connected with the current crop of players in a unique way.

"I think my overall style as a coach is just like how I played," Griffith said. "You can't coach without playing, it's just that simple. … You can't be something you're not."