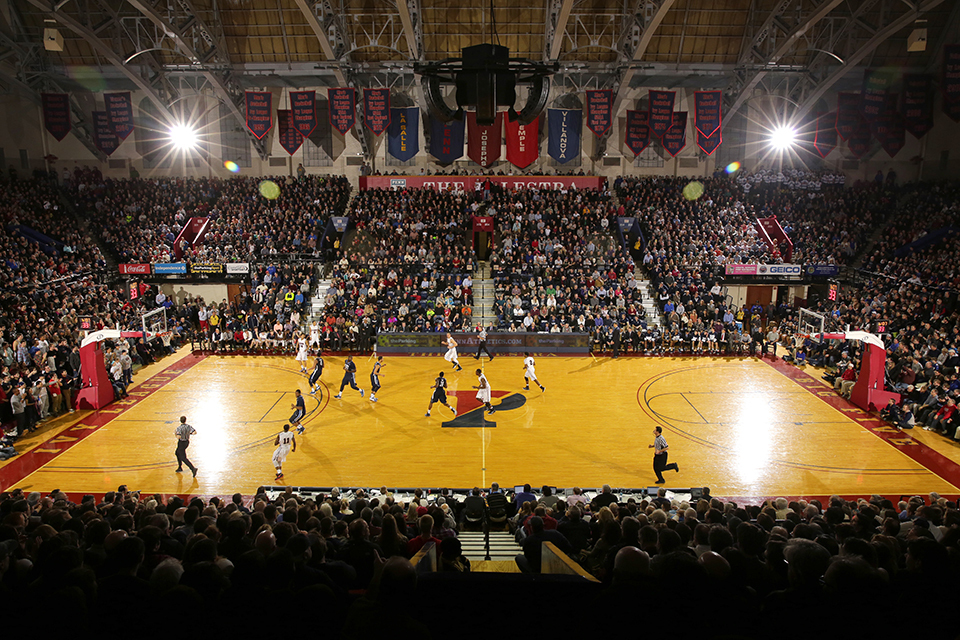 After 73 years of not having a conference tournament, the Ivy League finally succumbed to pressure from coaches, players, and Athletic Directors.

For over 70 years, the Ivy League basketball champion has been decided by the team that earned the best record against other conference opponents in regular season play. That suddenly changed on March 10 last year, when the Ivy League announced that it would host a four-team tournament after the end of the regular season.

But for the Ivy League, known for its stubbornness to change, the switch to a tournament had been a long time coming. Talks of the Ancient Eight adopting an end-of-season tournament have circulated the coaching ranks for years, but that's all they were, according to head coach Jim Engles.

"It was always something like, 'Yeah, I wish it would happen,'" Engles, who was an assistant coach at Columbia in the mid-2000s, said. "But it never got to the point where anybody in the administration really discussed it, and if they did it was a non-starter."

But once it was clear that the tournament could become a reality, Columbia's Ivy League title hopes for both men's and women's programs rose.

Because the men's program hasn't won the Ancient Eight since 1968, and the women's team has never neared an Ivy crown, a shot at the title would be warmly welcomed by both teams. With the recent post-season shift, the Light Blue only needs to end in the top half of the Ivy League to be within two games from a vaunted NCAA Tournament appearance.

"I think they're in the right direction," Feinberg said. "If they can get that four seed or a three seed, it gives them a chance, and that's really all you need. If you have one good weekend, you're in the NCAA Tournament."

That supposition might hold true for the men as well. In a conference where two teams, Penn and Princeton, have garnered 47 of a total 73 tournament bids, greater parity seems to be on the horizon. With four different teams making the Big Dance in the last eight years, the monotony has already been broken to an extent, but the Ivy event, hosted at the Palestra —known as the cathedral of college basketball—opens the door for even more Ivy competitors.

And Columbia has nearly risen to the occasion of late, as the 2015-16 squad had its own run at postseason glory when it won the Collegeinsider.com Postseason Tournament last season.

Still, Engles has his eyes set on more. He thinks the element of chance that the tournament adds could just be the push the Light Blue needs to break its dry spell.

Though the advent of the tournament could help programs like Columbia, Brown, and Dartmouth—the only team with a longer tourney drought than the Lions—it could also pave the way for two Ivy League representatives on college basketball's biggest stage.

While Ivy League women enjoyed their first season of gaining an at-large bid to the tournament, that has proven to be the only such instance across both men's and women's divisions. In certain scenarios, Ivy League Executive Director Robin Harris believes that the tourney could allow for what was considered an aberration to become the norm among the Ivies.

"We're confident with the quality of play in the Ivy League that should they [a strong Ivy team] lose in the tournament, they'd have a very good shot of getting that bid at-large while our tournament champion would get the automatic," Harris said. "We do believe that we are, at some point, going to get two teams on the men's side. Certainly the tournament will help that."

But that belief is not held by everyone. Feinberg, both Columbia coaches, and ESPN "bracketologist" Joe Lunardi—an expert predictor of the NCAA Tournament's bracket-style format—were unsure if the tournament would lead to more at-large bids.

Lunardi suggested that the addition could even hurt Ancient Eight tournament hopefuls, as it puts them under a microscope to which they aren't accustomed.

"More bad things could happen potentially to that second team in a tournament than going 13-1 and being in a tie," Lunardi said. "They're going to watch, and they'll be sitting there saying, 'This team isn't that good.'"

Quinlan emphasized that the regular season would still matter—a point of pride for Ivy purists. Instead, he sees the four-team tournament, as opposed to one that features all teams in the conference, as a way to ride the fence between honoring regular season efforts while also providing the opportunities for oft-excluded programs and a second Ivy tournament competitor.

"Either way, you probably need to be playing on Sunday to go at-large, but the other 14 games you still have to play really well," Quinlan said. "You can't have one and not the other."

While the tournament will have an immediate impact on how the Ivy League pans out, the decision to introduce it was not a hasty one, with the road to implementation laden with layers of bureaucracy.

By Harris' estimation, it took around two years for the league to officially move to a tournament format.

"This is a big deal," Harris said. "We're very thoughtful, and we take our time to develop the best possible option when we launch an initiative of this magnitude."

The tournament, which will air on ESPNU and ESPN2, is painstakingly planned by league and individual representatives—Quinlan noted that the weekly conference calls sometimes run over two hours long, as officials parse out each detail of the event.

But the effort won't likely be lost on the student-athletes and fans. In fact, that's the primary motivation that Ivy administrators purport—extending the atmosphere of March Madness to more teams in the Ivy League.

While Lunardi suspects that television deals factored heavily into the decision, Harris is adamant that the tournament is rooted in the added experience for player and spectator alike.

"Everyone loves to see the students celebrating when their team wins a conference tournament," Harris said. "That has been on an upward swing over the years, and there was a sense that our student-athletes were being left out of that."