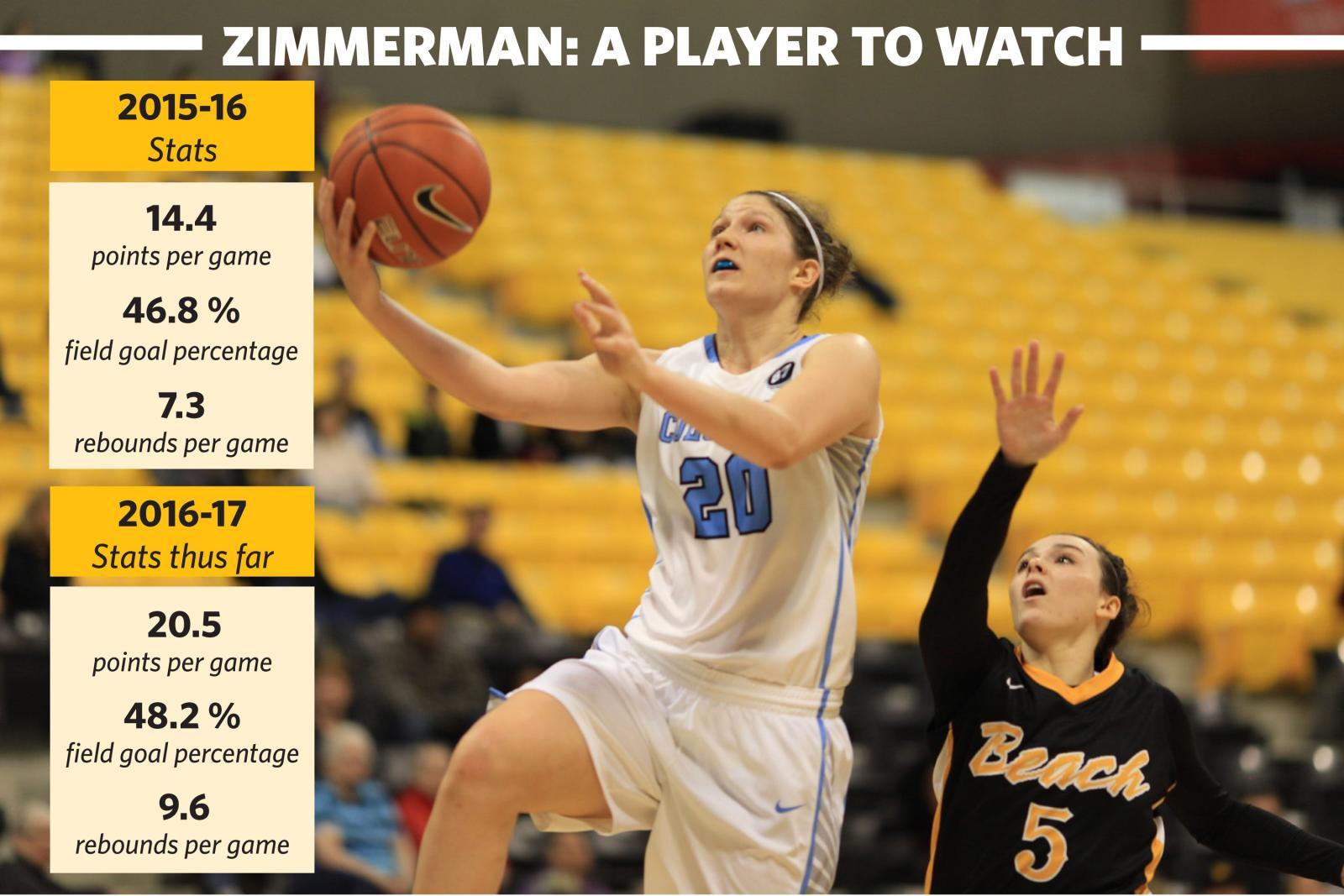 Junior forward Camille Zimmerman's 1,000th career point was by no means the flashiest play she has made this season.

Halfway through the fourth quarter against LIU Brooklyn, the junior forward drove to her right, elevated, and converted a textbook bank shot through contact. Zimmerman accepted her teammates' congratulations, then stepped to the line and converted her free throw to complete the three-point play.

However, both immediately after the game and roughly a month later, this milestone was the least of Zimmerman's concerns.

"It wasn't a huge deal for me," Zimmerman said. "We're not focusing on the numbers this year—we have bigger goals."

More important to Zimmerman was the context in which the basket occurred. The 66-57 victory extended the Lions' winning streak to six games, and sealed the first 8-2 start in program history. Columbia went 2-1 over its next three games, and entered Ivy League play with a 10-3 record.

Zimmerman has been essential to that impressive start. The junior leads Columbia in total points, rebounds, blocks, and steals, and her 20.5 points per game entering Ivy League play was the top mark in the league. The conference has taken notice, naming Zimmerman Ivy League Player of the Week four times on the season.

But in order for Columbia to avoid last year's in-league struggles, Zimmerman will likely need to maintain her production. Last year, as a sophomore, she averaged 14.4 points and 7.3 rebounds per game, but despite her efforts Columbia went just 1-13 in Ivy play after an 11-4 non-conference start.

This year, Zimmerman's dominance has formed the foundation for Griffith's offense, along with two other players—senior forward Tori Oliver and sophomore point guard Paulina Koerner.

"I knew that Camille was talented and skilled offensively, just from having played against her," Griffith—a former Princeton assistant coach—said. "I didn't necessarily want to build around Camille––[we just said], 'Alright, these players are experienced, let's work our offense through them and let's structure things so that things flow through them' and not just hope they get touches."

The early returns have been promising, thanks in large part to Zimmerman's development. The junior cited shot selection and conditioning as two areas of focus during intense off-season and summer workouts, and noted the benefits of Griffith's increased emphasis on opponent scouting.

"We're very focused on our scout and what the other team's doing just as much as we're focused on ourselves," Zimmerman said. "We're in a lot better shape, so we can stay with most teams, and you know who you're guarding."

Just as important as Zimmerman's individual improvement, however, has been her commitment to Griffith's offensive system. A casual glance at Columbia's statistics might give the impression that the Lions are a one-player show on offense, but according to Griffith the box scores don't tell the whole story.

"I don't think Camille would be as successful statistically as she is right now if her teammates weren't helping her get there," Griffith said. "Camille's a really hard guard because she doesn't score in the same way. She's not just a shooter, she doesn't just shoot from the high post, she doesn't just dribble going right... That has to do with her other teammates either setting her up or looking for her [and] making sure she gets the touches she needs."

Beyond scoring, Griffith has been impressed with Zimmerman's production on the boards. Her steadiness in that regard will be especially crucial for the Lions heading into the Ivy season, as sophomore forward Josie Little—who averages 8.0 rebounds per game, second on the team behind Zimmerman—has struggled with lower body injuries.

But Ivy competitors have also taken notice of Zimmerman's all-around dominance after a sterling first two seasons, and will be looking to limit her impact in league play.

"[Teams] know you, they've been playing you for three years now, so they really know what your strengths and weaknesses are and they'll pick on them," Zimmerman said. "There's not necessarily a new move that you can learn. … [It's] knowing what they're going to do and how you can counteract it."

If Zimmerman's performance to date is any indication, Ivy opponents will be hard-pressed to pick on any of her weaknesses. The junior will likely continue to post impressive statistics, but she is more concerned with the bigger picture—ensuring that her personal improvement is reflected through the success of the team.

That attitude was evident as Zimmerman continued to recall her 1,000th point. Zimmerman was quick to brush aside the individual importance of the number, instead choosing to focus on it as emblematic of her team's longer journey under Griffith.

"It just meant a lot as a milestone [for] all the work I've put in [and] all the people that have helped me get there," Zimmerman said. "It was a huge deal for that, but there's a lot more that we want to accomplish, so in that respect it was just a small step."