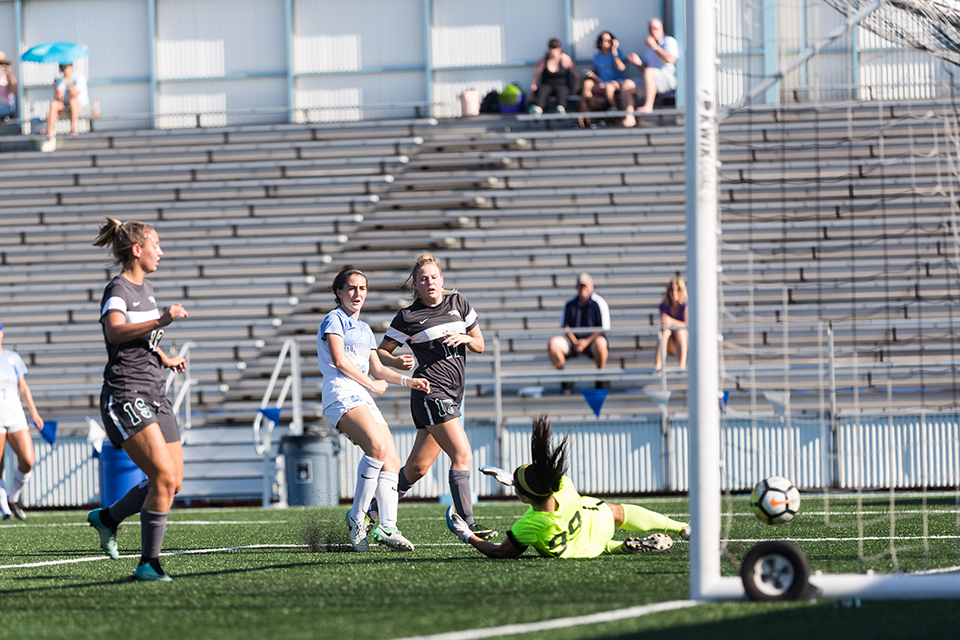 Sophomore Maddie Temares tallied her first two goals of the season in Columbia's record-breaking 11-0 rout of Wagner on Sunday.

The Light Blue matched this weekend’s scorching weather with heat of its own in decisive victories over Cornell on Friday and Wagner on Sunday.

After back-to-back losses last week, the Light Blue (5-4-1, 1-0-0 Ivy) showed up to the field ready for redemption on Friday. The Lions missed several key players due to preseason injuries, but Columbia won its opening Ivy League game against Cornell (2-4-1, 0-1-0 Ivy) and broke its scoring record against Wagner (3-5-2) with 11 goals on Sunday.

Columbia grabbed an early lead in both games, beginning with a third-minute corner kick against Cornell. Junior forward Emma Anderson scored Columbia’s earliest goal in a game this season on an assist from senior defender Natalie Ambrose.

In the 23rd minute, senior forward Natalie Neshat stole the ball after a failed clearance by Cornell’s Katerina Weikert. Neshat immediately followed with two shots, placing the second into the top of the net for the Light Blue’s second and final goal of the game.

Columbia’s 2-0 win over Cornell snapped the Light Blue’s four-game losing streak on the road this season and marked a winning start to the team’s conference play.

The Light Blue’s success continued at home on Sunday, with a historic 11-0 shutout win over Wagner breaking a 30-year-old record set in 1987 of 10 goals in a single game. Six different players contributed to the scoreline on Sunday to complete the new record.

Sophomore forward Emily Koe sparked the early lead for Columbia, scoring two goals in the 12th and 13th minutes. Koe’s teammates matched her efforts, with Neshat, Anderson, sophomore midfielder Maddie Temares, and sophomore forward Taylor Duran all finding the back of the net in the first half.

Anderson followed her strong opening performance with two goals in the second period to finish the game with a hat trick and two assists. Temares and Duran each contributed two goals, and junior forward Rachel Alexander closed the game with a goal in the 79th minute.

The Lions will next play Brown on Saturday at 4 p.m. at home as they attempt to remain undefeated in the Ivy League.