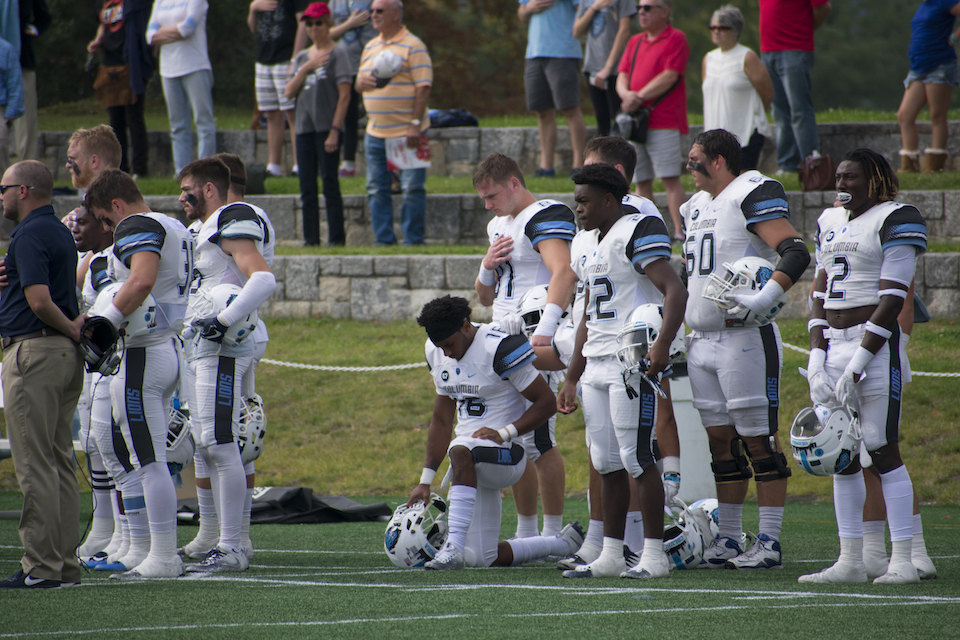 Sophomore defensive back Justin Hill was among four Columbia players who protested while the national anthem was played.

Two Columbia players kneeled and two sat on the bench during the national anthem before football's 41-17 win at Marist on Saturday afternoon.

A spokesperson for Columbia athletics confirmed that the two players who kneeled were sophomore defensive back Justin Hill and senior defensive back Tyler Holmes. Two other unidentified Columbia players were also seen sitting down on the Lions’ bench during the national anthem.

The players’ protest came three days after Spectator reported that head coach Al Bagnoli said he disagreed with this form of protest after several members of the Columbia University Marching Band kneeled while the national anthem played at a game against Princeton.

This is the first time this year that any Columbia athlete has demonstrated during the national anthem, and breaks from the college football tradition of teams staying in the locker room while the anthem plays.

After the game, Bagnoli told Spectator that Marist had insisted the team be out on the field for the anthem and that players did not approach him prior to the game about protesting.

“We normally are never out there so I didn’t even address it,” Bagnoli said. “We’ll talk about it [on Sunday] so we don’t get in that situation again.”

According to a spokesperson for Marist Athletics, it is a longtime Marist tradition that both teams come out of the tunnels prior to the national anthem.

Last Wednesday, Bagnoli also told Spectator that he hoped the team would have a conversation about the weight of these protests.

Hill and Holmes declined to comment through a Columbia Athletics spokesperson.

Shortly after the protest occurred, Columbia Athletics released a statement that affirmed free speech as a core value of the University and said that “each individual has a right to reflect during the National Anthem in a different way.”