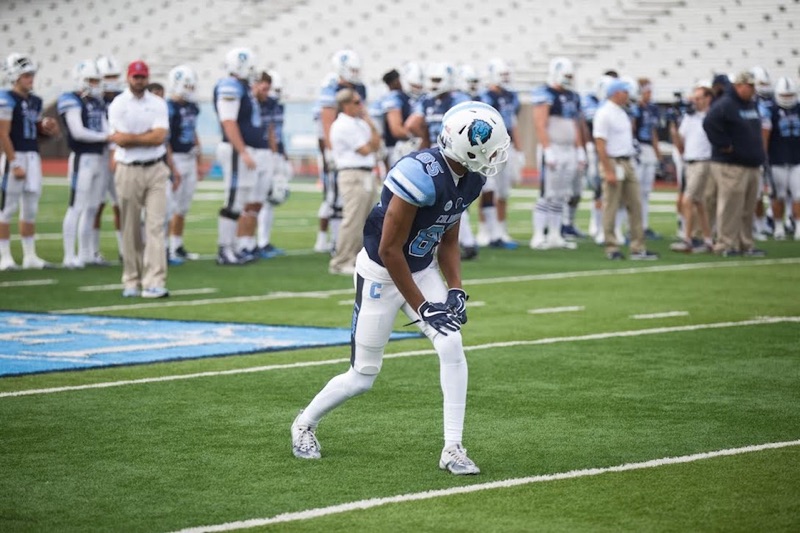 A controversial finish allowed football to escape with a 22-17 road win over Dartmouth to move to 6-0, breaking a tie for first place in the Ivy League.

The victory marked the first time since 1996 that the Light Blue has started 6-0, extending its run of three successive last-second victories in Ivy League contests.

On the final play of the game, junior defensive end Mike Hinton sacked Big Green quarterback Jack Heneghan for a loss of 10 yards. The referees took an unusually long time spotting the ball and the clock expired before Dartmouth (5-1, 2-1 Ivy) could run another play, leaving the home sideline furious as the refs hurried off the field.

Prior to Hinton’s sack, the Big Green looked poised to take the lead, taking just 41 seconds to march 62 yards all the way down to Columbia’s seven-yard line, aided by a 15-yard penalty for a horse-collar tackle by senior defensive tackle Dominic Perkovic. Head coach Al Bagnoli opted twice for questionable timeouts after Dartmouth plays that would have left the clock running, but Hinton erased any chances for regret on the Lions’ part.

The dramatic finish capped off a tale of two halves, as Columbia (6-0, 3-0 Ivy) entered halftime up 16-0 before allowing the Big Green to come roaring back in the second half.

After a quick Columbia three-and-out to begin the third quarter, Dartmouth steadily worked its way into Columbia territory. Dartmouth signal caller Jared Gerbino found the end zone from one yard out to bring the score to 16-7.

When the Light Blue offense took the field again, it quickly found itself in trouble with the Dartmouth defense. After sputtering on the first two downs, senior quarterback Anders Hill eventually connected with senior running back Chris Schroer for a 28-yard pass on an angle route, setting up first-year quarterback Josh Bean’s second rushing touchdown of the game for a 22-7 lead.

On the extra-point attempt, Columbia tried to push the lead to 17, but a penalty negated senior tight end Zach Dansby’s two-point conversion and Milstein’s subsequent PAT was blocked. Dartmouth quickly made its way down the field and kicker David Smith atoned for his earlier miss with a 33-yard field goal, making the score 22-10.

Hill and the Lions looked primed to put the game away on the ensuing drive, marching deep into Big Green territory. However, Hill went to the well one time too many on the angle route to Schroer, lofting a pass into triple coverage in the back of Dartmouth’s end zone. Big Green defensive back Bun Straton came down with the easy interception, and Dartmouth promptly went 80 yards to cut the deficit to cut the deficit to one score, capped off by a 38-yard touchdown pass from Heneghan to wide receiver Danny Estrada.

The second-half fireworks nearly overshadowed the Lions’ dominant first half. The first quarter dragged offensively in a callback to last year’s homecoming contest with the Big Green, with the only points coming on sophomore kicker Oren Milstein’s 27-yard field goal.

The Light Blue offense picked it up in the second quarter, as Hill put his throwing arm to good use despite the absence of sophomore wide receiver Ronald Smith II, who is recovering from jaw surgery. Bean scored the first touchdown for the Lions midway through the second quarter on a one-yard plunge to extend the lead to 10-0.

With 53 seconds left in the first half, sophomore wide receiver Christian Everett drew a flag for pass interference on third and goal, setting the Lions up on the Dartmouth two. On the very next play, Hill found sophomore wide receiver Josh Wainwright on a quick screen, and the sophomore just managed to extend the ball across the goal line. On the subsequent extra-point attempt, however, Milstein was wide left for the first PAT miss of his career.

Dartmouth responded with an efficient drive as the clock wound down on the first half, but Bagnoli used a late timeout to successfully freeze Smith, who missed a 21-yard field goal as the first half came to a close. Columbia entered the locker room up 16-0 for its fourth first-half shutout in six games, setting up a dramatic final 30 minutes.

Hill was 19-22 for 202 yards and the touchdown in the first half, and finished with 275 yards for the game, while sophomore wide receiver Kaleb Pitts and Wainwright made up for Smith’s absence with 86 and 99 receiving yards, respectively. Wainwright set a career high with 11 catches, topping last week’s 10.

Next week the Lions will face Yale (5-1, 2-1 Ivy) in New Haven, Connecticut, with kickoff scheduled for 1 p.m.