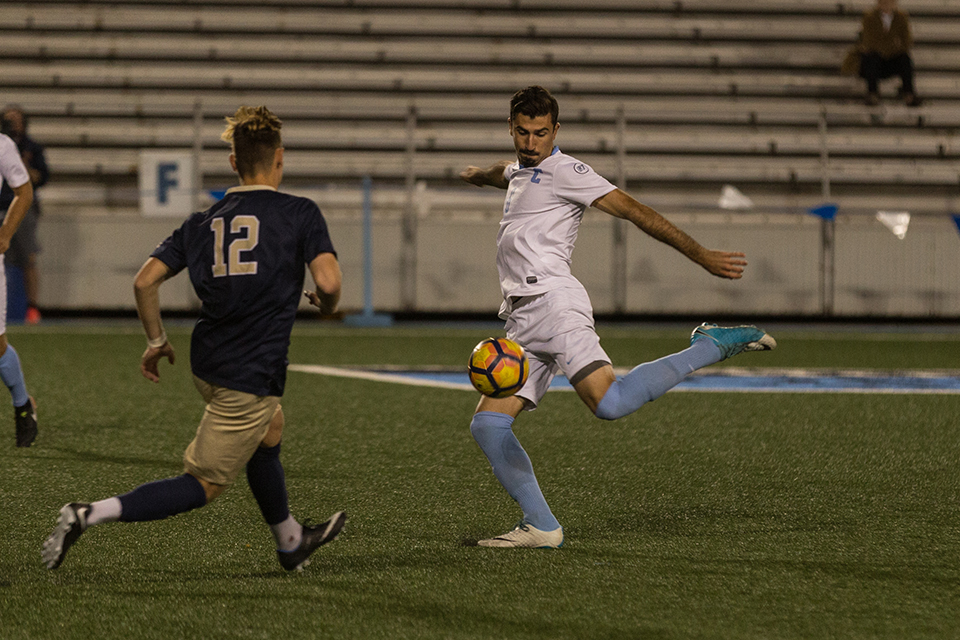 Haris Stamboulidis has been carried all across the world by soccer, but there's more to his life at Columbia than sports.

On a 110-degree day in Uruguay, 11-year-old Haris Stamboulidis travels a few hours with his family to play in a soccer match. Almost immediately upon arrival, he gets a bloody nose.

The blood upsets the young boy, but his father calms him down. Now, the boy faces a choice: Will he sit out the game, or will he shrug off the bloody nose and take his place on the field?

Stamboulidis chooses to play the match and goes on to score a hat trick. Ten years later, he plays as a midfielder and defender for the Columbia Lions.

“It’s just a lesson never to give up and to go, even if you’re unsure if you’re okay, and just [keep] pushing through,” Stamboulidis said, reflecting on that game a decade ago.

That motivation and dedication would eventually carry Stamboulidis all the way to Morningside Heights, but his journey along the way was far from linear.

Before coming to Columbia, Stamboulidis trained with various soccer teams all across the world. While attending high school in Australia, he played for school and club teams. He then went on to play for clubs such as the U-19 Victorian State School Boys team and the Melbourne City National Youth League team.

Through state programs and regional select teams, Stamboulidis met and trained under Joseph Montemurro—current coach of Arsenal Women—during his time at the Melbourne City National Youth League. Montemurro called Stamboulidis one of the “top athletes” he has worked with and recounted his “hunger and desire to develop tactically.”

After graduating high school, Stamboulidis played for U-19 Greece, despite having grown up in Australia. Thanks to his Greek heritage and close relationship with his grandparents, Stamboulidis adapted well to life in Greece and considers playing for that team a highlight of his career.

“The boys embraced me, although they did call me ‘The Kangaroo,’ which was pretty funny.” Stamboulidis said.

After graduating high school, Stamboulidis could have considered a professional career. But the appeal of both strong academics and athletics drew him to Columbia. Citing the Brooklyn Nets’ Jeremy Lin, an alumnus of Harvard College, as proof, Stamboulidis knows that athletes can simultaneously conquer challenges on the field and in the classroom.

Stamboulidis’ coach from Melbourne City also supported his choice to study at Columbia and pursue an Ivy League soccer career.

“He was progressing well through the youth ranks and obviously the opportunity to go to Columbia presented an amazing opportunity to develop further,” Montemurro said.

Since coming to the U.S., Stamboulidis has found opportunities beyond Columbia, playing for the New York Red Bulls U-23 and the Colorado Rapids U-23. Still, his long-term goal is to play for the Socceroos, Australia’s national men’s team, because he has always dreamed of representing his home country at the highest tier.

“I like the idea of studying at a top university, but also committing to being the best soccer player that I can,” Stamboulidis said. “I thought to myself, ‘Why isn’t it possible to do both?’”

At Columbia, Stamboulidis has established a balanced life, dedicating time to soccer, studies, hobbies, and to his health. But his Columbia experience goes beyond the world of goals and cleats or Butler and exams, extending to that of guitar strings and piano keys.

“I think I know where nearly all the pianos are on campus.” Stamboulidis said.

Among his teammates, Stamboulidis has found a musical partner in sophomore midfielder Matthew Swain. Post-practice locker room jam sessions are not uncommon for the two, and they can sometimes be found honing their talents at the pianos in Lerner or Hartley.

“It’s just a way to blow off steam and Haris is very musically talented,” Swain said. “He plays guitar, I sing, so it’s perfect.”

Stamboulidis’ success across all the opportunities Columbia has to offer has not gone unnoticed. He serves as inspiration to many of his teammates, including first-year Spiros Stamoulis, a fellow Melbourne, Australia native who knew Stamboulidis before arriving at Columbia.

“He’s the perfect role model,” Stamoulis said. “His work ethic in both his soccer and his studies is something that everyone, not just the freshmen, but everyone on the team would look at and be motivated by.”