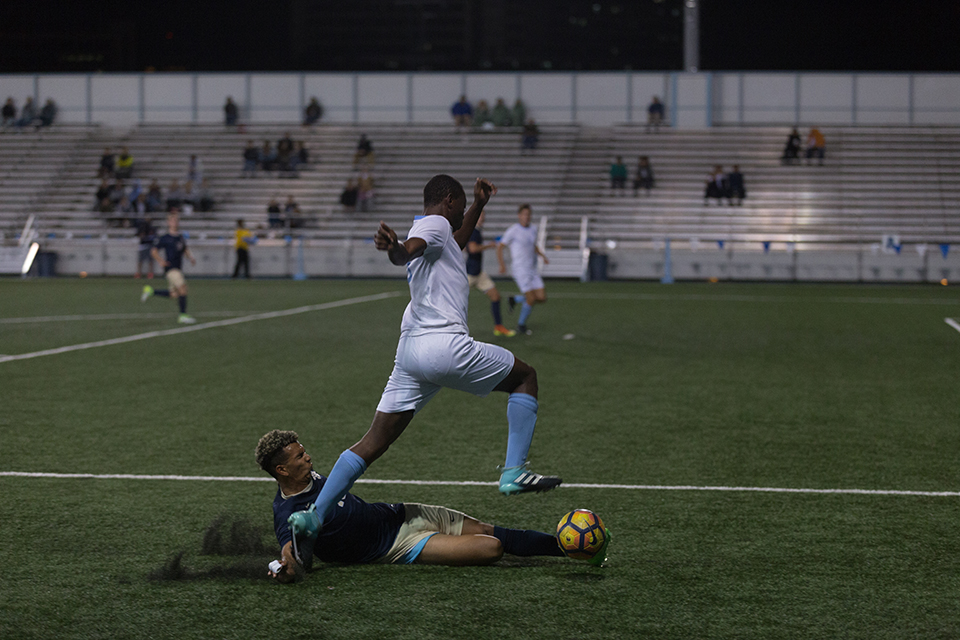 The Lions ended their season in the second round of the NCAA tournament with a loss to Wake Forest.

Men’s soccer ended its season and NCAA tournament run after losing to No. 1 Wake Forest 1-0 in the 89th minute on Sunday evening.

The Lions (12-3-3, 5-1-1 Ivy) held their own against the tournament favorite, keeping Wake Forest (18-1-2) to only three shots on goal out of its nine total throughout the game. After retaining the majority of possession on the night, the Demon Deacons were awarded a penalty kick in the 89th minute due to a late tackle by first-year defender Blake Willis.

Forward Jon Bakero took the spot kick for Wake Forest and slotted the ball into the lower left corner as junior goalkeeper Dylan Castanheira dove to the right. The Light Blue sent most of its team forward immediately after the restart and generated two decent chances to tie the game, including a headed attempt by senior forward Arthur Bosua that went wide just before the final whistle.

“I think we got what the team expected tonight,” head coach Kevin Anderson said. “We hoped we could get a little bit more offense out of it, and obviously we didn’t, but you have to make half chances count in big games.”

Conceding to the Demon Deacons, the Lions gave up their eighth overall goal of 2017 in a season during which Wake Forest has now scored 56 goals. Despite its defensive prowess this season, Columbia ended the season without any trophies or titles. The Lions, however, found their first NCAA win since 1990 in round one of the tournament this year and finished in second place in the Ivy League.

The Ivy League now has no representatives in the NCAA tournament going into round three, after Columbia’s game and Dartmouth’s loss to New Hampshire.

The Lions will continue to recruit and train during the offseason to prepare for the NCAA tournament in 2018.

“It’s a group that’s shown resilience and character the whole time and I don’t think that changed for us today,” Anderson said. “I’m proud of our group; we didn’t come here to participate, we came to win, so we walk away with a bitter taste.”