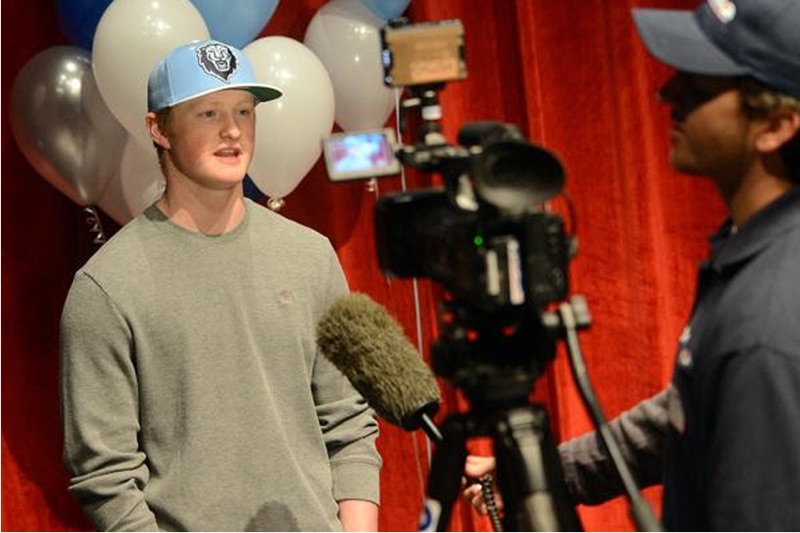 Senior quarterback Anders Hill takes a look back at his time with the Lions, offering advice to his younger self.

Enjoy your last few months in Colorado, because your life is about to change forever. You’ll be trading in your first car for a subway pass and your ski boots for dress shoes. You’ll be tested by the most rigorous academic workload in the country, while at the same time spending more than 40 hours a week on football. Oh, and one other thing I forgot to mention—you won’t win a single game your first year. So tell me, Anders, does that sound like something you want to sign up for? If the answer is no, let me explain to you why you’re completely and utterly wrong, and tell you why it will actually turn out to simultaneously be the most challenging and the most rewarding experience of your life.

From the day you move into Carman to the day you walk off the field for the last time, your best friends for life will surround you. The people that you will meet, hang out with, watch film with, live with, and win and lose with will be the people you most admire. They will help you get through the worst of times and also help you celebrate the best of times—especially when you live in the Sigma Chi house. You will cry with them and laugh with them. They will peel you off the turf when you get hit and hoist you in the air when you throw a touchdown—but most importantly, they will shape you into a better human being. I know these relationships will last a lifetime.

Your first season will not be easy by any means, but you will learn a lot from it. You’ll learn that some people on campus actually enjoy seeing you fail, and that is why your teammates and coaches are the only ones that truly matter. The funny thing is that those very same people who wanted to see you fail will be the ones cheering for you once you start winning—and believe me, you will start winning. I’m not sure if you have ever heard of Al Bagnoli—he didn’t even recruit you—but he will become a pretty big part of your life. He will help you love football again after a historically bad first year. You will help coach Bagnoli beat a Penn team, the college he came from, for the first time in 20 years, 34-31 in overtime. The feeling you’ll get when a sold-out stadium rushes the field will make everything worth it. But winning won’t be the only thing that makes football fun again. You’ll get to jump around during practice to Lil Uzi Vert, even though you’ll never be able to dance as well as Cam Roane and Landon Baty. It will be these little things that remind you why you love the game, so never take them for granted.

Bagnoli will also bring in coach Ricky Santos and a staff that will genuinely care for you—a staff that you will actually want to win for. To be honest, at first it will be a rocky road in terms of coaching. After your first four months in college, every coach that recruited you will be gone and replaced with unfamiliar faces. Then, after another year and a half, you will have your third offensive coordinator in three years—not the ideal situation. However, things will start to click. You’ll start to get to know your coaches as people, more than just as the guys blowing the whistle at you during practice. You’ll see them cry just like you in defeat, and act like little kids when you win. I can honestly say that you will end up doing everything in your power to make them proud, and that there are few better feelings than earning that pride.

College football is no cake walk. Putting in the work for almost three years until you start to see the fruits of your labor will test your patience. But I promise you, the long summer days going from work to football and the cold winter mornings running on the turf will all be worth it for what will happen your senior year. You will go on to be 8-2 in one of the best seasons Columbia has had since the 1960s.

I also want to be clear about something—when I say “you,” I don’t mean it will be all because of you—it will be due to the work that 31 seniors, talented underclassmen, and an all-star coaching staff put in. No, you will not win an Ivy League championship. You will never be satisfied with taking second place, but you will have helped build something that is going to last for years to come. You will have helped change a losing culture and turn it into one that every other Ivy League team envies.

As an 18-year-old living in Colorado, you don’t yet understand what it will mean for you to achieve this. To be honest, no one outside the program could ever truly understand what it means to those who were a part of it. You, along with your teammates and coaches, will have something that can never be taken away from you. There is a negative reputation associated with Columbia football, but it’s one that you will help change. Not a single person can rewrite the history that you will help write. But most importantly, you will be able to graduate knowing that you gave your heart and soul to Columbia football.

Anders Hill helped lead the Lions to their most successful season since 1996, collecting 2,550 all-purpose yards and 19 touchdowns for the season en route to second-team All-Ivy League honors.

From the Lion’s Mouth is a content series that provides Columbia’s coaches and student-athletes with a platform from which to share their experiences and connect with the Columbia community.