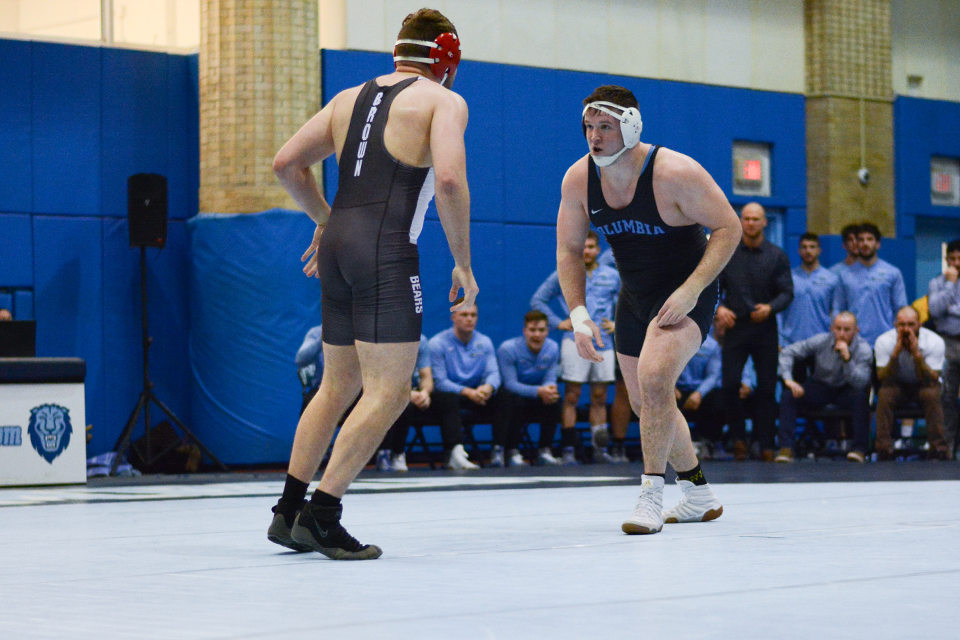 Over his three years as a wrestler for Columbia, senior Garrett Ryan has earned three All-Ivy first-team honors, an EIWA title, and has traveled to the NCAA Championships a total of three times.

Winning the Eastern Intercollegiate Wrestling Association heavyweight title on March 4, 2017, thereby earning an automatic spot in the national tournament, was one of the best moments of then-junior wrestler Garrett Ryan’s career. Just days later, Ryan was back in one of the places he feels most comfortable on campus—neither the wrestling room, nor his dorm, but the pottery studio at Teachers College.

Now a senior and co-captain of the wrestling team, Ryan still spends up to four nights a week in the studio working on his passion.

Before he became the “superstar”—as the studio manager and ceramics teacher at Teachers College Stepanka Horalkova calls him—that he is today, he was just a kid who only became serious about wrestling in his first year at Horizon High School in Scottsdale, Arizona.

Ryan started wrestling at 10 years old at the Sunkist Kids Wrestling Club in Scottsdale, but never thought about it very seriously until he was about 14 years old. After this point, he never looked back, winning the Arizona state title in 2012, his junior year of high school.

Spending time in his high school wrestling room, he met the ceramics teacher at his school, who often worked out with the wrestlers there. By the time he took a required ceramics class, he had already built a relationship with the teacher and knew he wanted to continue to work with pottery. 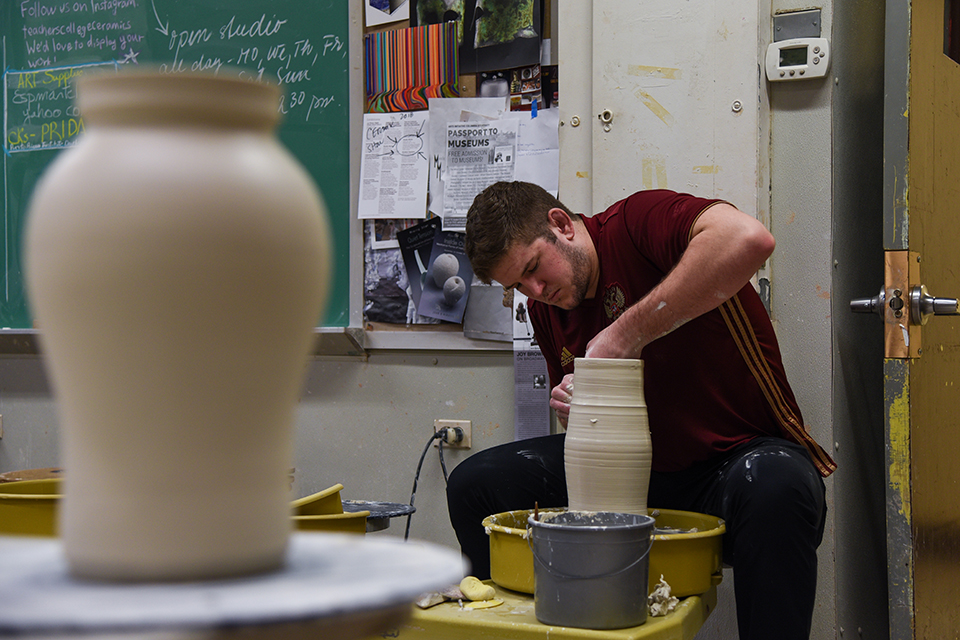 Natalie Tischler
Before he was recruited to Columbia's wrestling team, Ryan made sure to check that he would have regular access to a studio.

“I just really got hooked on it right away,” Ryan said. “The spinning in the circle of the wheel, I was terrible at it when I first tried it, but I had a lot of fun doing it.”

Ryan began to love pottery so much that he skipped other classes to spend time working on his ceramics, even getting detention a few times for it.

After winning the state wrestling title his junior year, he decided to transfer to prep school at the Wyoming Seminary in Pennsylvania, one of the best high school wrestling teams in the country at the time.

But before he moved across the country away from his friends and family to Pennsylvania, he had to make sure of one thing—that he would be able to continue his hobby of pottery.

“[I] made sure they had a studio there before I secured my transferring, [and] kept going there,” Ryan said.

The same thing was true when Ryan committed to wrestle at Columbia, and, sure enough, there was one at Teachers College.

Prior to starting college, Ryan decided to take a year to focus on wrestling, spending a year as a resident at the Olympic Training Center in Colorado Springs, Colorado. But even during his year in Colorado, Ryan did his research and found a studio close by for him to continue to improve and work on his pottery.

“The year I was in Colorado Springs I found a studio a mile away,” Ryan said. “I used to ride my bike there all the time.”

Ryan eventually made his way to Columbia and earned a spot in the starting lineup at heavyweight as a first-year, winning Ivy League Rookie of the Year.

Throughout his years at Columbia, Ryan has earned three trips to the NCAA Championships, three All-Ivy League first team honors, one EIWA title, and has accumulated a 99-37 record, and his senior season isn’t over yet.

Even while earning all of these accolades, he has continued to visit the studio and has created some amazing pieces. Several things have kept Ryan coming back, even while dealing with the academic rigor of an Ivy League education and the pressures being a Division I athlete.

“[In] wrestling you’re both in the circle and you’re trying to control him keep him out of the middle of the circle and stay in your best position,” Ryan said. “With pottery, your opponent is clay and it wants to get thrown outwards to the edge of the wheel because it’s spinning so fast and you’ve got to force it in and control it through a series of movements.”

The strength built from his years of wrestling have helped him in controlling and creating countless pots, vases, mugs, and other ceramics, of which he believes he’s created nearly 1,000. 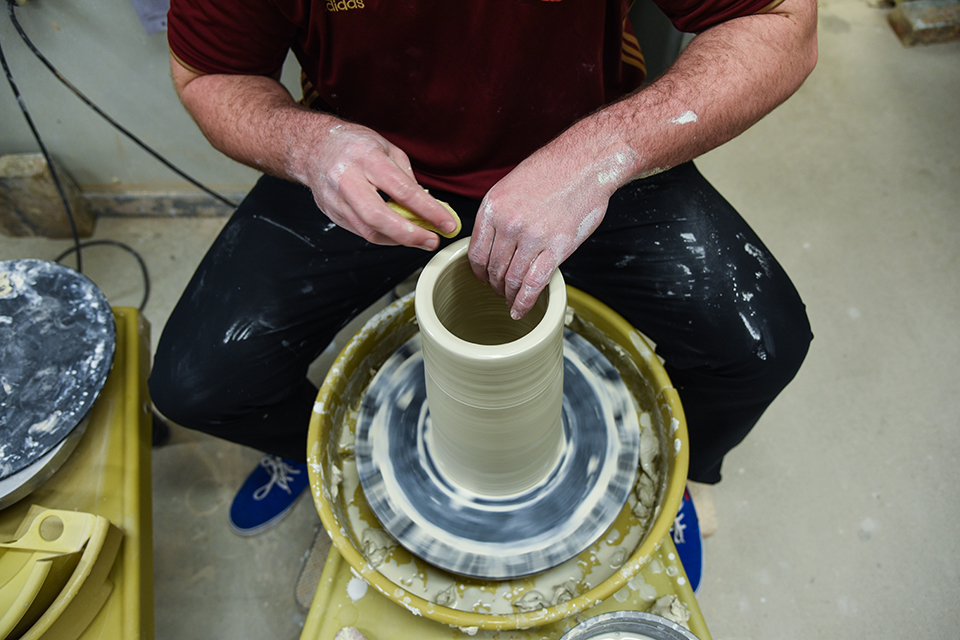 Natalie Tischler
Ryan crafts a piece on a potter's wheel at the pottery studio.

“I really like just how tangible pots are, I really like seeing the finished product through the entire production process and then holding something and going, ‘I made this with my own hands,’” Ryan said. “Greeks and Romans have been dead for 2,000 years, but we still see their pottery and it’s really cool, just a solid object.”

Sitting down and working with clay has a therapeutic effect for Ryan, allowing him to relax and let all the stresses that normally surround him fade away. When focusing on shaping a piece of clay, what is in front of him takes priority over everything, as one slip in concentration can result in a misshapen or disfigured pot or vase.

His head coach, Zach Tanelli, said he sees the positives that having a hobby like pottery can bring to a wrestler.

“I think it says a lot about him as a person, I think he has balance in his life which I think is good,” Tanelli said. “He has a distraction, and distractions can be good at times. … I’ve always said since day one when I heard that Garrett was involved with [pottery] that I was actually very encouraged, and it actually makes a lot of sense.”

As for making the time with such a busy schedule, Ryan is one-of-a-kind—it isn’t often that Horalkova sees undergraduates in the studio, much less a student athlete. When she first met him, she was surprised to see someone with Ryan’s background in the studio, but she has been really impressed with the evolution he has shown in his work even in just the past year.

Despite the improvement, just as with his wrestling, Ryan is likely his own harshest critic, finding the most imperceptible flaws in his works.

“I’m a very strict perfectionist with my technique in wrestling and I’m a very strict perfectionist with the pots I make in the studio,” Ryan said. “I have so many vases and pots that are very nice but I hate them because I can look at them and I know the one thing that I did wrong. I look at wrestling the same way, you might get that takedown that you were looking for, but you know that you were sloppy in this one aspect, [or] you needed to be more crisp.” 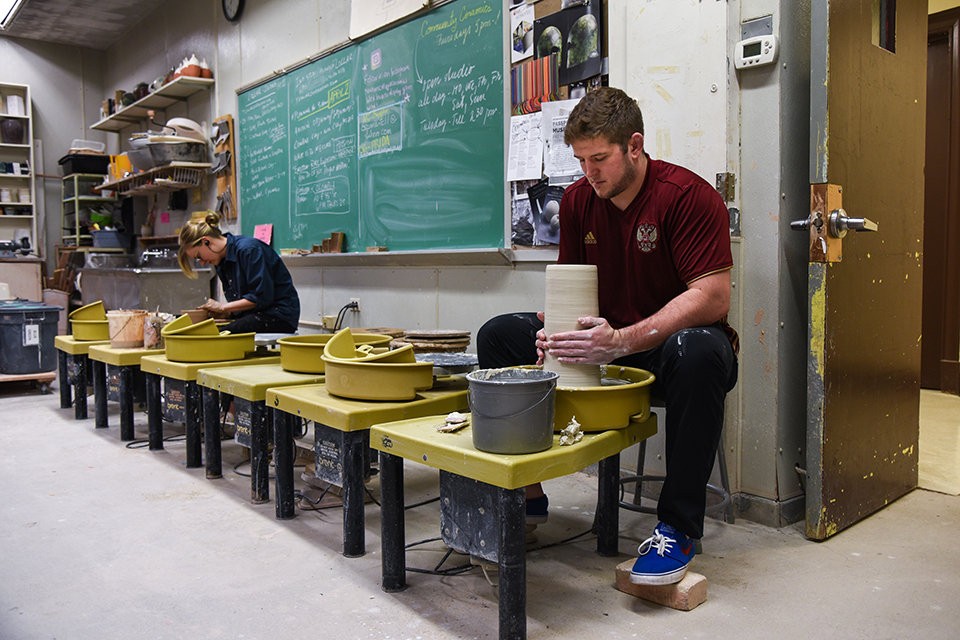 Natalie Tischler
Ryan spends up to four nights a week at the studio, located at Teachers College.

Pottery isn’t just a college hobby for Ryan, though—it is a real passion that will stay with him for the rest of his life. When he graduates, moves back to Arizona to work for his father, and tries to compete for world and Olympic freestyle wrestling teams, he will still find time for his pottery.

“I don’t see myself physically being able to stop making pottery,” Ryan said. “When I die I’m going to get cremated and then I’m going to put my ashes in an urn that I made.”