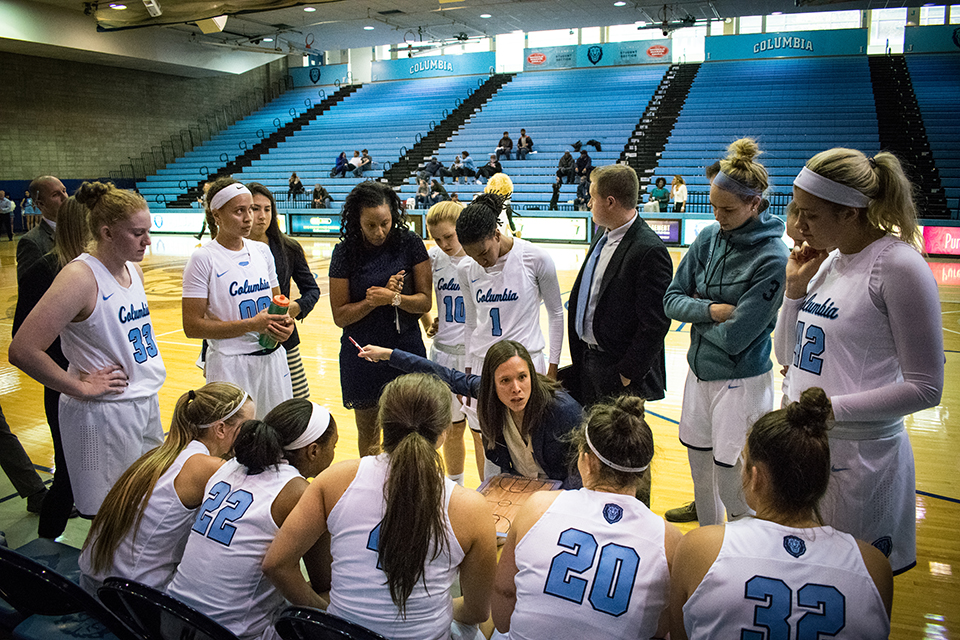 After two 20-plus point losses to Penn and Princeton last weekend, women’s basketball was officially eliminated from Ivy League tournament contention for the second straight season.

Sitting at 1-9 in league play, the Lions, led by head coach Megan Griffith, CC ’07, have consistently struggled to find success in Ancient Eight play and have not won the Ivy League title in the program’s 37-year history.

In Griffith’s second year, the Lions have posted a disastrous 4-22 record in Ivy League play. This season, the team has failed to generate consistent offense. It ranks dead last in shooting percentage among the Ivy League at 34.7 percent from the field in conference play and an Ancient Eight-low 29.1 percent from 3-point range.

According to Griffith, the Lions’ failure to execute at a high level on offense is due to a combination of coaching and personnel issues.

“I don’t really think the losing has taken hold of this program. They were losing before I got here,” Griffith said. “I think it’s something that’s been part of the culture change.”

Given the team’s catastrophic shooting percentages and poor shot selection from behind the arc, the Lions’ problems with scoring are likely more systematic than simply coincidental.

The team’s issues represent a stark departure from last season, when the team’s offense was better across the board. The 2016-17 Lions shot 37.2 percent from the field and 30.2 percent from three in conference play, sixth in the Ivy League in both categories.

This offensive drop could be partially due to roster turnover, as Griffith lost Tori Oliver, CC ’17, and Paulina Koerner, two important players from last season. But the return of weathered upperclassmen like Columbia’s all-time leading scorer and senior forward Camille Zimmerman and the arrival of multi-talented first-year guard Riley Casey make the Lions’ regression from last season all the more puzzling.

The 2016-17 team won three games in Ivy League play and was outscored by an average of 5.9 points per game; this year, these figures have plummeted to one win and 16.5 points per game.

Offensive stagnancy is a likely culprit of the team’s decline. Griffith’s offense relies heavily on Zimmerman by getting her the basketball in either the low or high post. As shown below, the other four players remain stationary on the perimeter after she gets the ball, even when Zimmerman is double- or even triple-teamed.

Columbia Athletics / Ivy League Network
Zimmerman gets the ball off a feed from Casey, and scores over multiple defenders.

Although Zimmerman is more than capable of scoring against one or two defenders, Columbia refuses to run set plays that require players to move without the basketball. Similar to the first clip, on this possession sophomore guard Janiya Clemmons must take a contested jump shot as other perimeter players once again stand and watch.

Columbia Athletics / Ivy League Network
Clemmons drives toward the paint, rises and scores over her defender as her teammates remain outside the three-point arc.

“We are at our best, 100 percent, when we have multiple scoring factors. When we’re stagnant, when people rely on Camille and we’re not hitting shots, we don’t win games,” she said. “You can’t win a game with one person.”

The play depicted above proves Griffith’s point, as Casey cuts backdoor and earns a wide-open layup and an easy two points for the Light Blue. On this play, Casey demonstrates tremendous court awareness, and the Lions generate a high percentage shot because players cut and screen away from the ball once Zimmerman draws the attention of two defenders in the low post.

Even when the Lions are active and successful on offense, their measly six-person rotation, in which Casey, Clemmons, and Zimmerman average over 30 minutes per game in conference play, looks tiring.

The demanding nature of an Ivy League schedule, in which players are asked to play on back-to-back days every weekend, paired with an increase in minutes in Ancient Eight play have left the Columbia players particularly fatigued within an offense that does not require them to move.

The increase in minutes for players in the shorthanded six-person rotation has diminished the overall performance of the Lions’ top players.

“The people that get to play, for me, are the ones that are working as consistently, the ones that I think can help us the most,” Griffith said.

Most college coaches want to reward their hardest-working players, but Griffith has consistently prioritized just six of those players. The Lions’ five starters played 176 minutes combined against Princeton this past Saturday, whereas the bench played just 24 minutes combined.

This disparity was obvious in the second half, as the starters came out tired and played flat in a game that quickly got away from them. As other teams with fuller rotations consistently outrun the Lions in the game’s final stages, Columbia’s rotation stays slim and the team continues to fall behind.

For example, Griffith’s team has been outscored by 80 points in the fourth quarter this season compared to an average margin of just over 50 points in quarters one through three.

Much like its offense this season, women’s basketball remains stuck in one place—at the bottom of the Ivy League.

Fortunately for the Lions, perhaps the silver lining in an otherwise disappointing season is Griffith’s first recruiting class. First-year players Casey, guard Imani Whittington, and forward Madison Pack have gotten more than enough opportunities to play, as they average a collective 25.9 minutes per game.

“People are still learning how to be a part of the vision that I have and our staff [has],” Griffith said.

As a second-year head coach in a Division I league, Griffith has only had one recruiting class. But with another class of potential contributors on the way, a third season without progress may doom her role within the program.