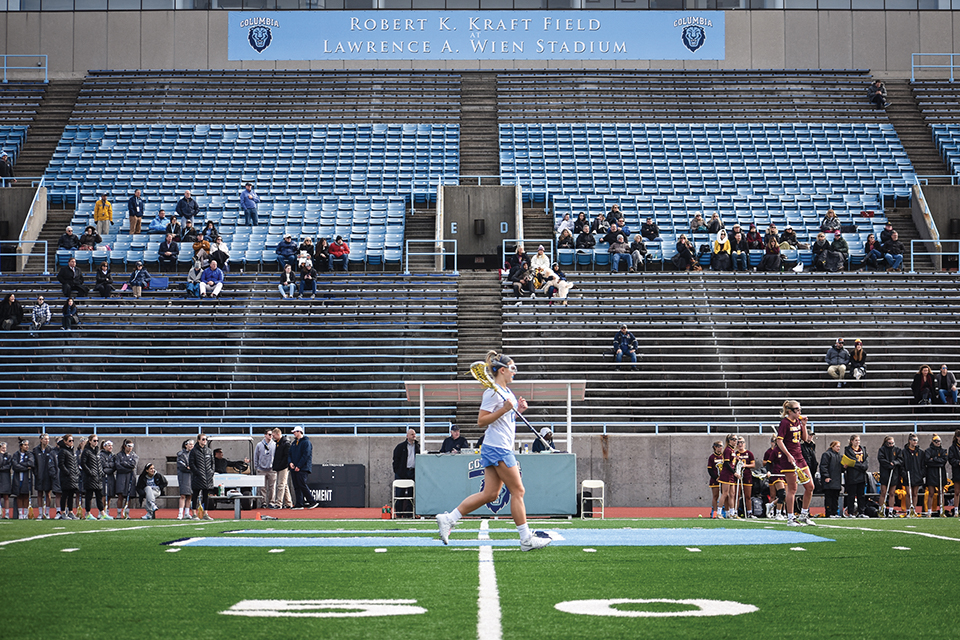 Columbia Athletics spent twice as much on men’s sports as it did on women’s sports in 2016, creating the biggest such disparity in the Ivy League.

According to data provided by the United States Department of Education on athletics spending from 2003 to 2016, every Ivy athletics program spends more on its men than its women. Even after adjusting for the ratio of male-to-female student-athletes, however, Columbia is an outlier. The University of Pennsylvania, with the second-widest gap, spends about 77 percent more on its male than its female student athletes.

As Athletics has shifted its focus to high-profile men’s sports, the spending gap at Columbia between men’s and women’s sports has grown and affected the entire department. Women’s teams routinely perform worse than men’s teams, see a higher level of coach turnover, and often enjoy fewer benefits and resources.

Averages like these are sensitive statistics: one outlier in the group could skew the entire measure, and in Columbia’s case that’s especially possible. In 2012, Columbia began investing heavily in football, perpetuating rising gaps in Columbia’s spending on men’s and women’s teams. Taking football out of the equation, spending on men’s and women’s teams was quite comparable—until 2012.

In early 2015 and in the midst of football’s 21-game losing streak, newly-hired athletics director Peter Pilling secured head coach Al Bagnoli, one of the most successful coaches in Ivy League history, to engineer a turnaround of Columbia’s bottom-dwelling team. 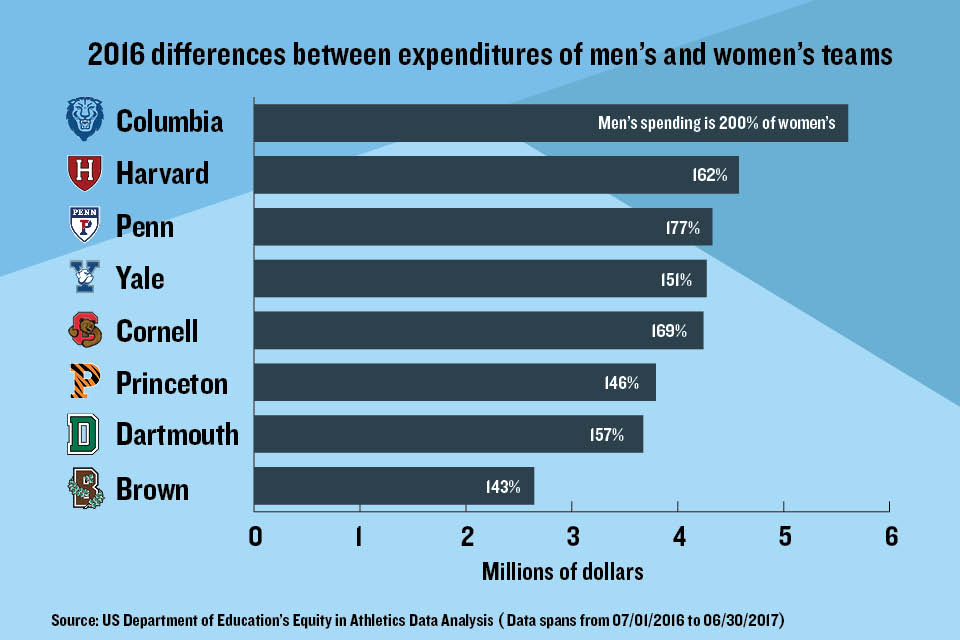 Between 2012-13 and 2016-17, Columbia increased its spending on football from $2.93 million to $4.14 million—a 41 percent hike. Five years later, that investment has started to pay off, as Columbia secured a dramatic homecoming victory and finished in second place in the Ivy League this past fall with eight wins, its best total since 1996.

Senior woman administrator and Associate Athletic Director Jacqueline Blackett as well as Chief Financial Officer Erica Aresco were not made available for interviews for this story despite numerous requests for comment.

In 1979, the U.S. Department of Education’s Office for Civil Rights published its interpretation of equality regarding collegiate sports. The OCR’s report focused on equality in scholarships, level of competition, and team benefits, which include equipment, practice times, and coaching. 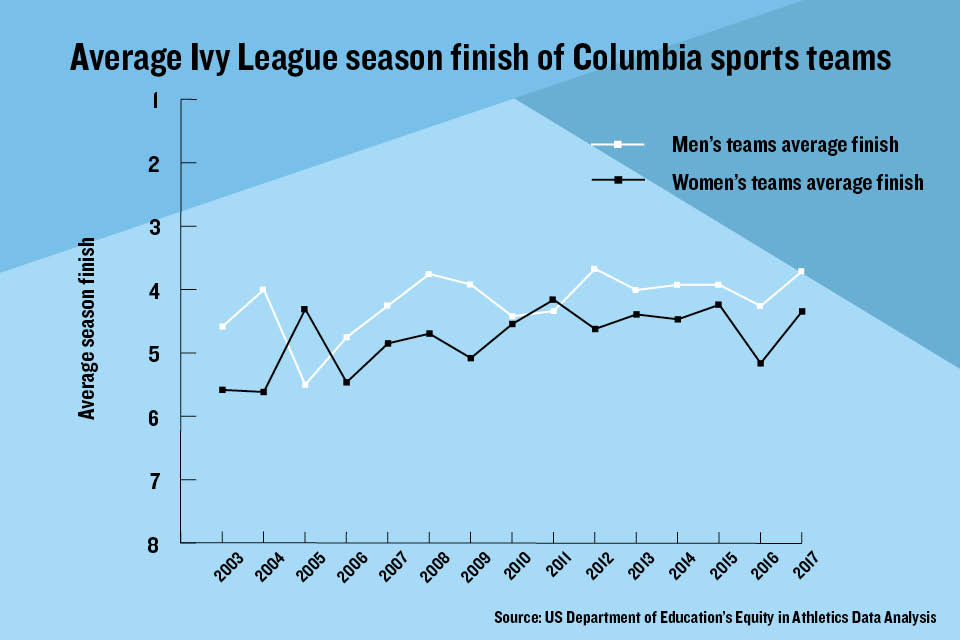 In the Ivy League, which only offers financial aid on the basis of need, the key component of equality in sports lies in team benefits.

One such area that has been included under the umbrella of opportunity is the quality of coaches in programs.

Hiring differences may explain the wage gap at Columbia, but an underlying discrepancy remains. The men’s teams get more experienced coaches.

“One of the challenges we have here is that there’s a gap in terms of age and head coaching experiences with some of our men’s sports as opposed to some of our women’s sports,” Pilling said. “That creates a little disparity.”

While all of the coaches that Spectator tried to contact in recent weeks were reticent to speak on matters of pay, softball head coach Jennifer Teague noted in an interview last September that men’s and women’s coaches are essentially doing the same job.

“Obviously success takes a toll on how much people are getting paid but at the end of the day I like to think I’m working just as hard as my male counterparts and my female counterparts,” Teague said.

Aside from dollar amounts, the effects of inequality are often hard to measure, but teams’ success is a clear starting point for the athletics department.

Since 2003, men’s teams at Columbia have claimed 30 Ivy titles while women’s teams have claimed only 13. Since 2012, around the time Columbia began its massive investments in football, that trend has marginally widened, with 15 men’s titles for Columbia and five women’s.

“As we start to be successful, one of the great things that comes out of this is that we’re starting to identify new donors associated with football that are excited about the direction of the program and what coach Bagnoli is doing,” Pilling said. “Success breeds success.” 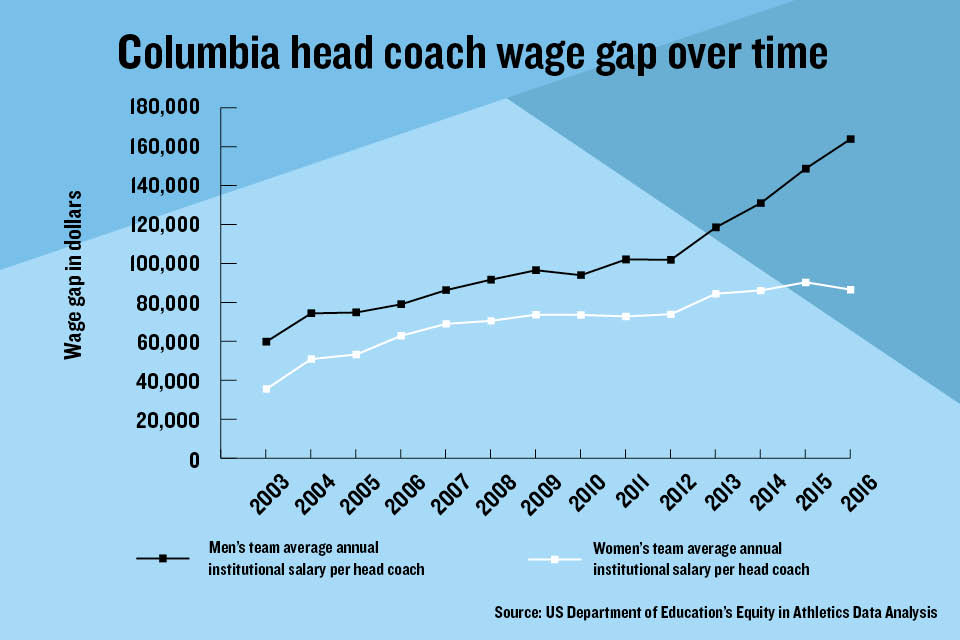 Athletics has become the second largest draw for donations out of the entire Columbia community on Giving Day, receiving $3.17 million dollars on the annual fundraising event in 2017. Pilling has attributed football’s recent hype for much of the event’s success.

Beyond disparities in success, student athletes on women’s teams have noticed significant differences in funding between their own programs and other programs around the country.

According to a number of student athletes, those complaints are often not gender-specific. Across the board, Columbia’s programs are more cash-strapped than their counterparts at institutions that more heavily prioritize athletics. Some women’s athletes, however, notice functional differences between their programs and those of their male counterparts.

During her time as captain of the women’s rowing team, Laney McGahey, CC ’17, picked up on some ways in which that spending difference might manifest itself.

“It [the funding disparity] wasn’t something that we talked about all the time, but when you see a men’s team get something that you don’t get you’re like, ‘why did they get that?’” McGahey said. “They got to fly to Florida last year and it was like ‘well, we’ve got to take a 24-hour bus and they got to fly.’”

Imbalances between men’s and women’s sports, however, are not always financial.

“In the top floor of one of our boathouses, the names of every male rower who’s been in their top boat for the past over 100 years are carved into the wall, and there’s no evidence that a women’s team exists,” said another athlete competing on the women’s rowing team.

But not all programs have such differences. One athlete competing on the women’s track and field team said that she didn’t notice a disparity in her own program—largely due to the fact that both the men’s and women’s track athletes compete at the same events and often practice together—but had heard other female athletes complain about differences between their respective sports.

That divide, according to Pilling, is not something athletes have expressed directly to him or the administration.

“I can’t speak on behalf of student athletes, but ultimately all the feedback that we hear is generally very positive,” Pilling said. “They feel very good about their student athlete experience.”

But student athletes across the board—most of whom were not previously aware of it—agreed that the spending difference was a concern. One of the athletes competing for the women’s rowing team said that she believes that the department cares mostly about the visibility of its program—a quality that, for most sports, pales in comparison to the media attention lathered on Columbia’s rising football program, or men’s and women’s basketball.

McGahey echoed that sentiment, while adding that she wasn’t comfortable with the notion that such a difference—compared to both peer institutions and other men’s teams at Columbia—might persist.

“It colors my perception of the way campus has been the past year,” McGahey said. “Everyone has said, ‘we finally have a good football team, it’s so much fun, school spirit.’ If that’s coming at the cost of all the women’s athletes on campus, it doesn’t seem worth it.”

Pilling, for his part, does not plan to be complacent when it comes to the spending and wage gap. When asked whether or not the gap would be a permanent result of the new model of increased spending on football, Pilling was confident that the current state of affairs wouldn’t resume.

“Absolutely not,” Pilling said of accepting the spending and wage gaps. “You look at what we’re trying to do with our programs … we’ve invested significant dollars into what we consider one of our high-profile sports. We’re not sacrificing anybody and any program in order to increase another program, we want the tide to rise collectively with all 31 of our sports.”

Athletes interviewed were granted anonymity for fear of retaliation.