The Dynasty: How men’s tennis has dominated the Ivy League and risen to national prominence

The Dynasty: How men’s tennis has dominated the Ivy League and risen to national prominence 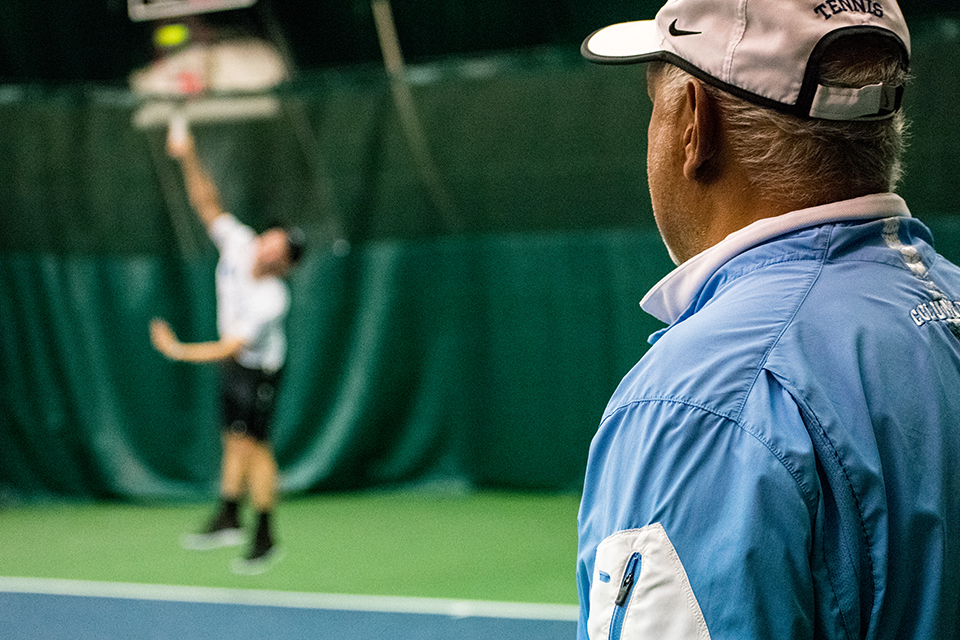 Men's tennis head coach Bid Goswami has overseen the team for 36 years, and in the past five years the program has reached its pinnacle.

Following the 2011 season, when men’s tennis went 2-5 in conference play and finished in sixth place, the future of the program came into question. With three Ivy League titles in the previous five seasons, the team was already reasonably successful. But what lay in store for the next five years?

Having fine tuned the tripartite of recruiting, coaching, and alumni base, the program has thrived the past five years, becoming the most successful sports team at Columbia and one of the best men’s tennis programs in the country.

Coaching has been a Columbia strong suit ever since head coach Bid Goswami took charge in 1982. But after hiring Howard Endelman, CC ’87 and one of Goswami’s first recruits, in 2010 as associate head coach, Columbia’s ability to recruit high-caliber players has continued to improve.

The class of 2017 featured players like Shawn Hadavi, CC ’17, and Christopher “Booie” Grant, CC ’17, who would eventually become household names at Columbia. This class of players came in looking to turn the program around and would graduate with just one loss against Ivy League opponents and four consecutive Ivy League titles. 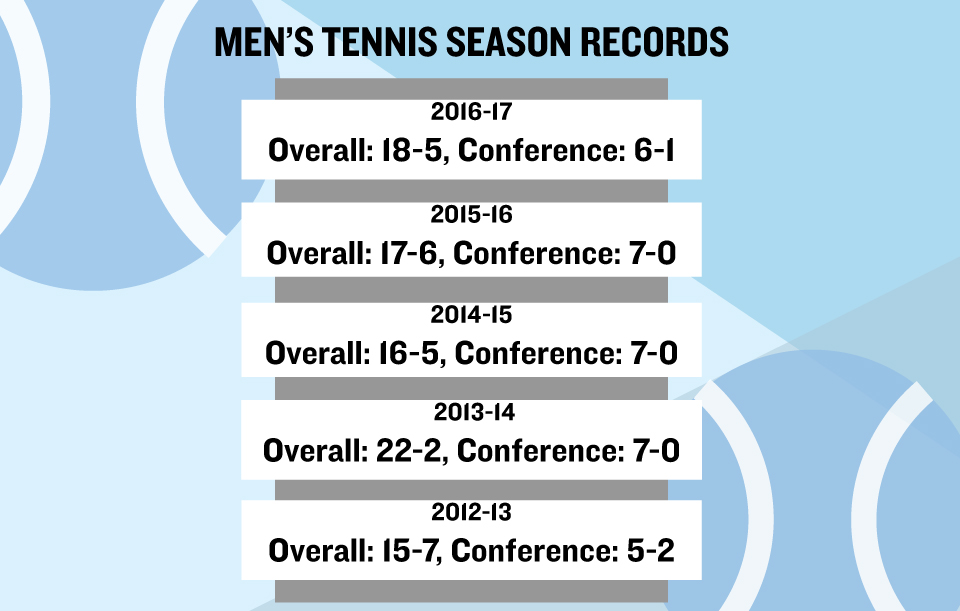 “What drew me to Columbia was a combination of academics and, at the time, a promising tennis program,” Grant said. “We went from being ranked top 75 and happy about it, to it becoming the norm to be in the top 20 [every year].”

The Lions continued to recruit star high school players in consequent seasons. The current team has several “blue chip” recruits who, according to tennisrecruiting.net, were among the top 25 players in the nation when they graduated high school. These players are first-year Austen Huang, sophomore Adam Ambrozy, and junior Victor Pham. Joining the blue chip recruits are “five-star” recruits like first-year Jason Lui, sophomore Alex Keyser, and junior Timothy Wang.

When choosing where to play tennis, current team members saw beyond the appeal of Manhattan, the Ivy League, and even Columbia itself.

“The thing that really stood out was the team chemistry,” sophomore Jackie Tang said. “Everyone spent time together. When matches were tight, you would fight for your teammates who were standing right on the court next to you.”

As important as team chemistry was for Tang, he and most of the current players insisted that the role their future coaches played in the recruiting process was the deciding factor.

The program has revolutionized the concept of coaching in tennis, from the top down, starting with Goswami. Goswami has been running the program since 1982, making him the longest tenured coach at Columbia. Goswami is also known for being one of the winningest coaches in college tennis history. His impact on the team as a coach and mentor cannot be understated.

“I think the program aims also to be successful at the national level and not just the Ivy League level,” Hadavi said. “And it all goes back to Bid and Howie being not just tennis coaches but mentors who care about our well-being off the court, not just on it.”

His extraordinarily long tenure bonds several generations of players that have all served under the same head coach for almost 40 years.

“I feel like a lot of guys are in my position, where I feel like there’s a close affiliation with Bid,” former player Rajeev Emany, CC ’05, said. “We’re all still very close, and a lot of people still show up to the matches especially during the Ivy season.”

Alongside Goswami in his eighth year with the program is Endelman, who was inducted into the Columbia University Athletics Hall of Fame in 2014. He excelled as a player for Columbia, leading the Lions to two Ivy League championships and played in the US Open after school.

As a coach, Endelman, referred to as “Howie” by most of his players, has found that same success with the team 30 years later, in part due to his dedication to his players. 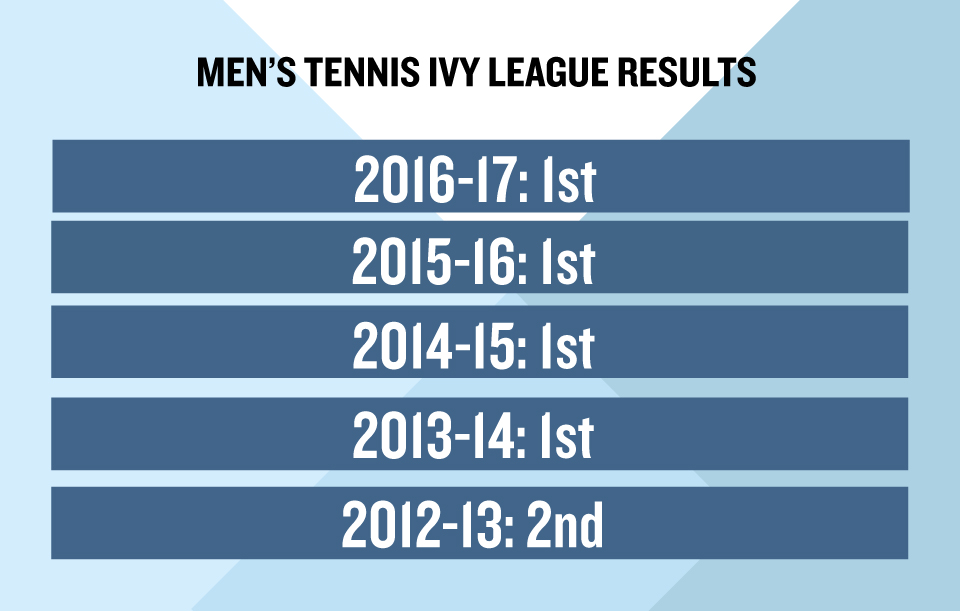 Goswami and Endelman differ in strategy and execution, making them an effective duo.

“Bid’s more of a mellow, indirect coach, but he can be very direct at times,” Tang said. “He’s more of, like, the caring mother, and Howie’s the aggressive father.”

A third coach is volunteer assistant Haig Schneiderman, CC ’12, whom superfan Rob Endelman, CC ’91, brother of Howard, claims to be one of the instigators to the current program-wide success—an essential figure in the canon.

Schneiderman played at first singles during his time at Columbia, but those teams were not competing at the national level to which Columbia has climbed in the past five years.

“I take videos of my serve, and we send it to Haig, and he does all this, like, video analysis to see what are these little things I could do better,” Tang said. “He’s really dedicated behind the scenes as well because he watches hours and hours of film of our opponents.”

Alumni do more than just practice with the team: They pour into the stands at every match, making sure each Lion feels supported from the first to the sixth court.

The extensive men’s tennis fan base encompasses a plethora of identities, spanning beyond just fans of the sport, program, and university itself. It is spearheaded by Rob Endelman, who has traveled all across the country to attend the team’s matches, attending every single Ivy League match for the past six seasons. His raucous cheering and often health-inspired motivation have driven players for multiple generations.

Rob Endelman himself had not been fully convinced of the men’s tennis program’s capacity. It took the success of the 2016 season, when the Lions won the Ivy League title undefeated despite losing Lin, Narayana, Vancura, Schnur, and Dragos Ignat, CC ’18, the top five players of the previous four years, to fully convince him.

Rob Endelman’s fervor cannot be understated, but he is not alone. The players on the team share his passion, even if they aren’t on the court.

“If six guys are playing, the rest of us are yelling our asses off,” junior Will Matheson said. “We’re the home team; there’s no way that the opposing team should be louder than us. We have to be there for those guys.”

Vancura believes that the Light Blue’s home success is predicated on alumni and general supporter presence. 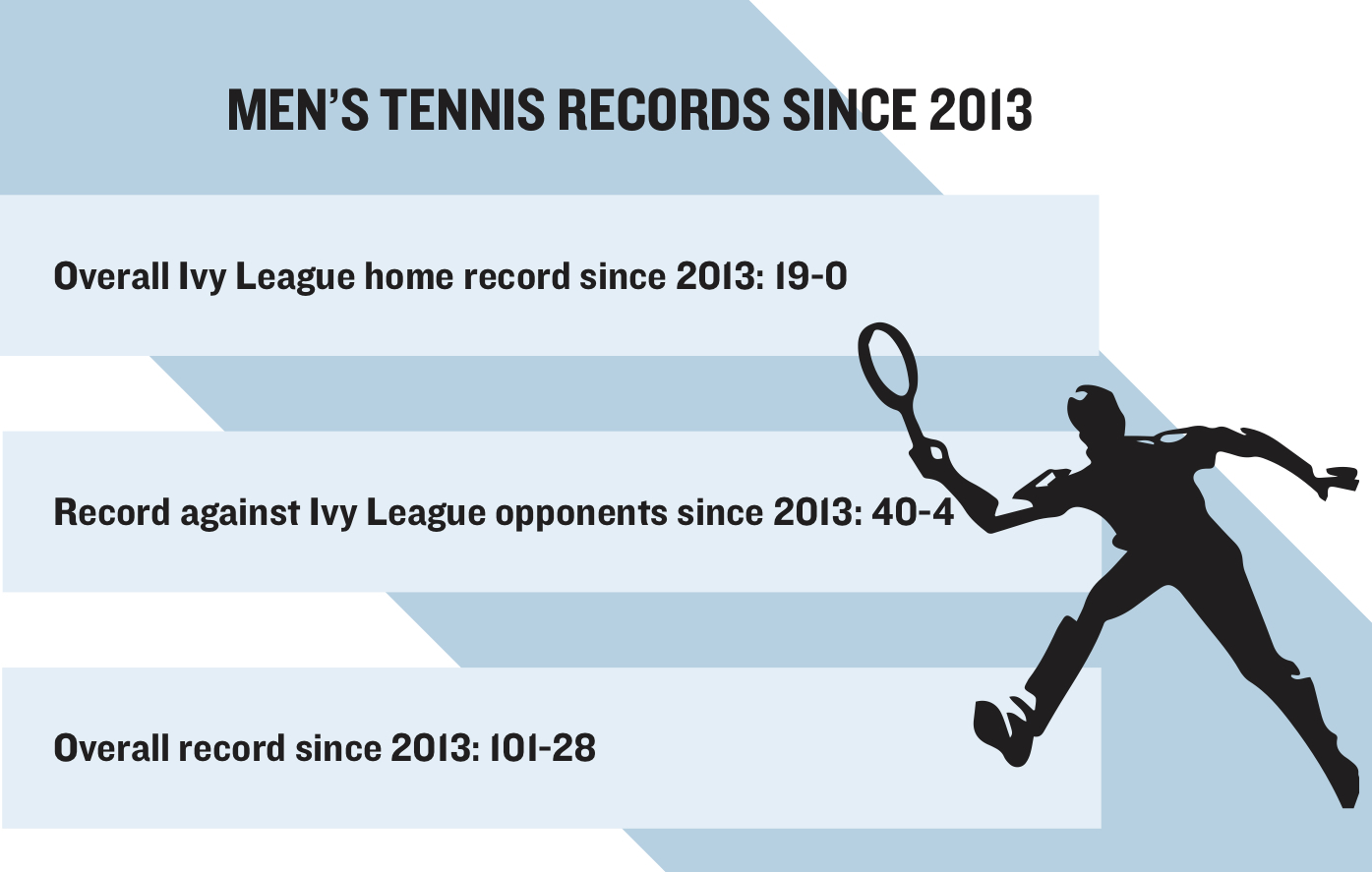 “The cheering is for us, so it obviously helps, so having that atmosphere really helps us,” Vancura said. “It’s kind of a shock for a lot of teams when they come into the bubble and they play in those conditions.”

Additionally, Vancura, among other alumni, laud the benevolence and accepting nature of the community. Graduation does not mean graduating from Columbia men’s tennis in any way, distinguishing it from other tennis programs in the country.

Throughout the multitude of personal connections, the program has exceeded any expectations, becoming an athletic monolith—a dynasty.

“Columbia is really the only school where I saw the culture meant more to them than anything else,” Huang said. “Just the team dynamic—everyone stays together, everyone does everything together, and honestly, that’s what clicked.”