Softball is having its moment

Softball is having its moment 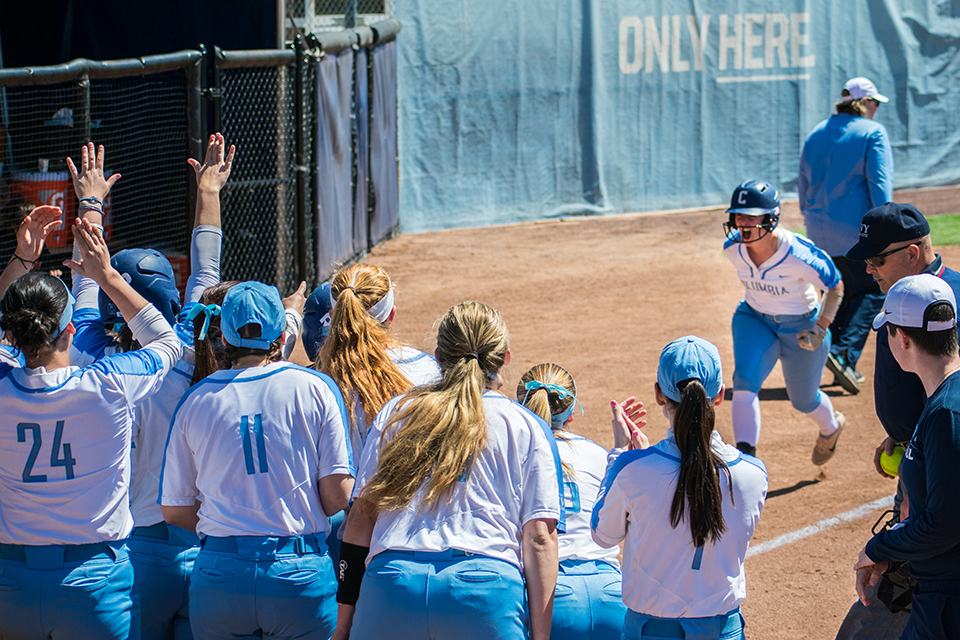 Softball has had an extremely successful season, tallying a program-high in wins and currently sitting in third place in the Ancient Eight standings.

After years of toiling away near the bottom of the Ivy League standings, Columbia softball seems to finally have turned a corner. A sea of change in coaching, recruiting, and execution has resulted in the program’s best year since its inception in 2006.

The Lions (19-18, 11-7 Ivy) have gone 16-9 after facing a tough out-of-conference slate to start the season, with only one of those nine losses coming by more than three runs. At third in the conference, the Lions are now firmly in Ivy League contention for the first time ever.

After last season’s team finished with 20 wins overall—an improvement from the 16 wins from each of the two previous seasons—there were plenty of positive expectations for head coach Jennifer Teague’s team coming into the 2018 season.

The Light Blue surpassed those expectations this season, as the team’s 11 Ivy wins so far are already the most in program history.

With three games left to play, the Lions are within striking distance of first-place Harvard (20-13, 13-5 Ivy) and second-place Dartmouth (16-16, 10-5 Ivy). Columbia’s winning ways are backed up in its statistical résumé: During conference play, the team ranks first in the Ivy League in earned-run average, third in runs per contest, and first in total home runs.

The Light Blue graduated only one regular-position player and one rotation pitcher from the 2017 season. The offense returned 86 percent of its at-bats, and the pitching returned 80 percent of its innings thrown. The team’s progression has come almost entirely from within, built largely by head coach Jennifer Teague and her staff.

“It has been a complete culture change in the approach of the game,” Teague said. “In every piece we’ve tried to get better, including just the little things: pitch selection, taking advantage when bases are open.” 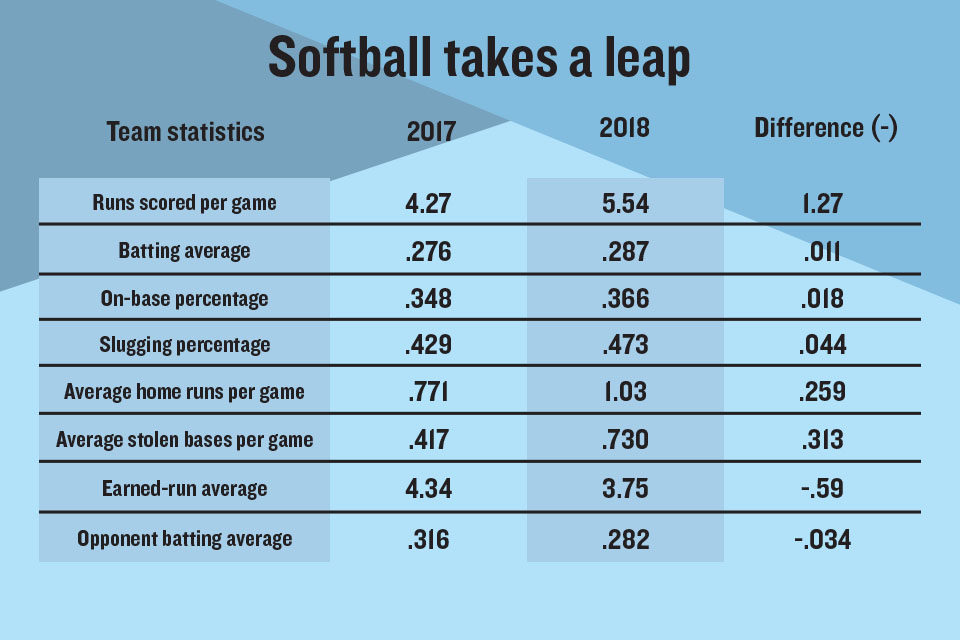 Instrumental to this culture shift has been the team’s offense, largely led by senior first baseman Madison Gott and sophomore center fielder Sommer Grzybek, who have batted .344 and .330, respectively, with seven and five home runs to their names.

Gott and Grzybek have hit three and four in the lineup respectively, both this season and last, and have collectively fed off of the discomfort they bring to opposing pitchers. Gott noted that this year, however, the lineup around them has improved dramatically.

“It’s really cool knowing that if I get on base I have [Grzybek] behind me to move me over, move me in,” Gott said. “I think, since we have such consistent power hitters this year, it definitely helps with the overall feel of our lineup.”

Last season’s lineup has not been replaced—Gott, Grzybek, and others were still extremely valuable a season ago. The batting order has rather been enhanced by two holdover role players, senior second baseman Taylor Troutt and sophomore catcher Amanda Nishihira, who started to hit like stars and made the Columbia lineup formidable in the process.

“I think the depth has been the biggest change in our program,” Teague said. “This is my fourth year—it has taken four years to get to the point where we have built the team and the culture really to where we want it, pushing for those Ivy League championships.”

Troutt’s renaissance has been particularly notable, as the senior has raised her batting average from .223 last year to an Ivy League Player of the Year-level .431 this year. She leads the conference in overall batting average as well as batting average during Ivy play, somehow improving with a .464 mark.

Teague noted that she saw a hot streak coming for Troutt after an injury-shortened season last year but that her current level of play has surpassed all expectations. Troutt, however, added that she has always had this in her—it just took the right situation to bring it out.

“For me, it being my senior year, I was just ready to leave it all out on the table,” Troutt said. “I wasn’t going to go into the season putting pressure on myself, but I have expectations for myself—I knew it was my last year and I wanted to go all out in every single area of the game.”

Nishihira, meanwhile, is tied for the team lead in home runs with seven after hitting just .175 with one home run last season. She has also taken over full-time catcher duties, no small feat for someone who saw the field only sporadically last season.

The leaps made by Troutt and Nishihira have been complemented nicely by the additions of two first-years that have given the lineup an influx of energy. Shortstop Maria Pagane has matched Nishihira’s seven homers and earned the leadoff spot in the batting order, while third baseman Max Ortega has hit .324 since taking over the hot corner position after the first week of Ivy play.

The immediate contributions of Pagane and Ortega alongside those of the returning Lions has made Columbia an extremely difficult opponent to pitch to, and the power provided by the young players is perhaps the Lions’ most substantial asset. Only Gott and Gryzbek had more than four home runs last year, but Troutt, Gott, Gryzbek, Pagane, and Nishihira have already surpassed that mark.

Troutt alluded to this wealth of talent in the batting order, saying that having so many good hitters makes everyone’s individual job easier and more worthwhile.

This young, deep unit has already hit one more home run than last year in 11 fewer games, something Teague specifically referenced when talking about what she wants in her players.

“When we go out recruiting, we look for our right-handed hitters that can really mash the ball,” Teague said. “You can’t defend a home run.”

The Lions have matched this aggression at the plate with new fearlessness on the basepaths. According to Teague, the coaching staff changed the way it has baserunners take leads before a pitch, switching to a more aggressive, baseball-like approach that makes the Lions a difficult and unique opponent. This change has brought 27 stolen bases thus far, up from the mere 20 the team swiped all of last season.

All of the development on offense would be for naught, though, if the pitching staff had remained the sieve it was last season.

Luckily for Columbia, senior Maura Lynch and current sophomores Madison Canby and Erin Gallo came into this season ready to bring the Light Blue to another level.

Canby has remained the Lions’ workhorse and currently leads the Ivy League in innings pitched after leading the Lions in that category as a first-year last season.

After a rough start to this season, she caught fire, posting a miniscule 1.54 earned-run-average in her first 10 Ivy League appearances before cooling off in a difficult outing against Princeton last Sunday. Canby credited the Lions’ tough out-of-conference schedule with preparing her and the team for the rigors of conference play.

“I think the preseason helped a lot, going to California and playing some of the best teams,” Canby said. “So when we come to Ivy League play, we know how to go into the game focused and play our best.”

Gallo made an even more significant jump from last season, with a slight improvement in accuracy allowing her nasty pitch arsenal—as Teague calls one of the pitches, “spinny”—to dominate opponents, who went from hitting .310 against her last year to .228 this year overall and just .200 during her 10 appearances in Ivy League play.

“The college game is so different from any other level, so I think having that experience as a freshman was really valuable,” Gallo said. “[This season’s success] just came down to knowing where to throw the ball, what pitches to throw when, how to work with a coach who called pitches for us, working with a catcher.”

The unsung hero of the pitching staff has been Lynch, a middle reliever who appears just about every other game and has a 3.94 earned-run-average after posting a lackluster 4.33 last year. Gallo’s vast array of pitches, Canby’s stamina, and the dependability of Lynch combine to form a pitching staff that has been downright stingy in Ancient Eight play, boasting an Ivy-best 2.92 earned-run average in conference games.

“It’s been really cool to see [Canby and Gallo] getting a ton of experience, a ton of innings,” said Teague. “It’s super important that they remember their successes and not their failures, because this is a game of failure. And [Lynch] has been great for us. She’s someone that we can count on.”

Teague credited the entire roster for being exceedingly coachable, which has allowed her and her staff to execute their vision of a power-hitting, efficient-pitching Lions squad that can capably contend year after year.

“We have preached and preached and preached being a good teammate and doing everything for the betterment program,” Teague said. “Anything less than that is not acceptable. [The players] have really bought into that and rallied behind that. It just all goes back to leaving the program better than when you got here.”

Despite this being the best year in program history so far, Teague has faith that her team will progress further. Although the Lions will lose leaders and stars in Gott, Troutt, and Lynch, the rest of the team will return in full force bolstered by a recruiting class that Teague has been harboring a lot of excitement for.