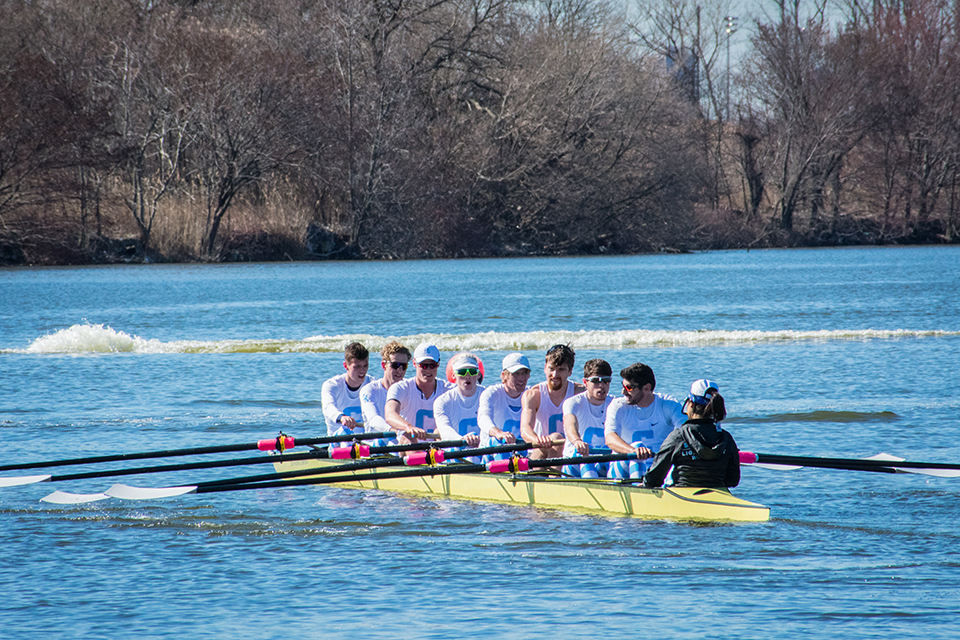 Lightweight rowing secured its second IRA National title in three seasons after holding off Princeton in the grand final.

Lightweight rowing captured its second IRA National title in three years after dominating the field this season, reclaiming its status as the top lightweight crew in the country after a disappointing 2017 season.

After a three-week break following EARC Sprints, where the Lions already added another gold to their impressive collection, Columbia navigated heavy headwinds to outpace the competition at the grand final. Columbia’s first varsity eight finished the race with a time of 6:18.782, a mere 0.73 seconds ahead of Princeton. Behind Princeton was Harvard, who nabbed third with a time of 6:24.255, 5.5 seconds off the mark. Penn, Navy, and Yale rounded out the group with times ranging from eight to 15 seconds slower than Columbia’s.

Head coach Nich Lee Parker, who was put in charge of the program in 2013, captured his second title in five years as head coach, and was also honored as the unanimous pick for Ivy League Coach of the Year after Columbia’s dominant run.

His stellar record had previously earned him US Rowing’s nod for Fan’s Choice Collegiate Coach of the Year and the Joy of Sculling University Coach of the Year, both in 2016. In his spare time, he doubles as a doctoral candidate in biomechanics at Columbia.

“You’re always trying to create a pathway for success, and now we know we have one that works not just once but twice,” Parker said. “We know where it’s gone wrong, we know where some things are that have gone right, and we’re going to keep using that feedback to continue making it better.”

After last season, Parker and his colleagues reevaluated what prevented the team from claiming its second straight national title.

“We learned that [the team not taking care of each other] was one of the things we didn’t do very well last year, and we saw it come through and really affect the team’s performance,” Parker said. “We addressed it from the very beginning of the year and the very first team meeting. We talked about how to have difficult conversations and how to engage with your teammates, and it was not a smooth road. ... The training had some differences but not a ton, but what we were getting out of it was so much more, and our practices had so much more intensity and focus, and the deliberateness with which we prepared was on another level.”

Overall, the championships brought Columbia a strong close to a promising 2018 season. Throughout their regular season, the Lions suffered only one loss and claimed victory in the rest of their cup races. The second varsity eight, which featured several members of 2016’s championship first varsity eight, achieved an undefeated season. Senior Ben Landis and junior Jenson Carlgren now boast two IRA National Championship gold medals apiece. The two sat in the winning boats at both the 2016 and the 2018 grand finals and are the first rowers in Lions history to have even done so at all. As individuals and as a crew, the team could hardly have dreamed of a more perfect finish.

“That confidence that comes from having won twice with these systems in place goes a long way,” said Parker. He elaborated on his plan for the future, saying “One of the things this team did really well was fundamentals, and we did more work on fundamentals this year than we’ve probably done in my time, in any year over the last nine years that I’ve been at Columbia. ... We learned how to take care of each better, and that’s what’s gonna happen next year too, except part of taking care of each other better is helping each other be better. Mostly we’re gonna be better at all the fundamentals we know we have to do in order to have a great race.”

Lastly, and perhaps most notably, junior coxswain Bella Zionts became the first woman in Columbia history to win a National Championship in rowing after coxing the first varsity eight to a win in the grand final.

Parker and his system, which has bred unprecedented success at the highest levels of the sport, will next travel to the Henley Royal Regatta, held on the River Thames in the United Kingdom.

The Lions will send two boats — a coxed four and a development four with no coxswain — to compete for the Prince Albert Challenge Cup and the Visitors Cup, respectively.

The coxed four will be coxed by Zionts and will include Landis, Carlgren, junior Sebastian Krappe and sophomore Torrance Smith, while the development four will be determined at a later date. The Regatta will take place from July 4th to July 8th in Henley-on-Thames, England.