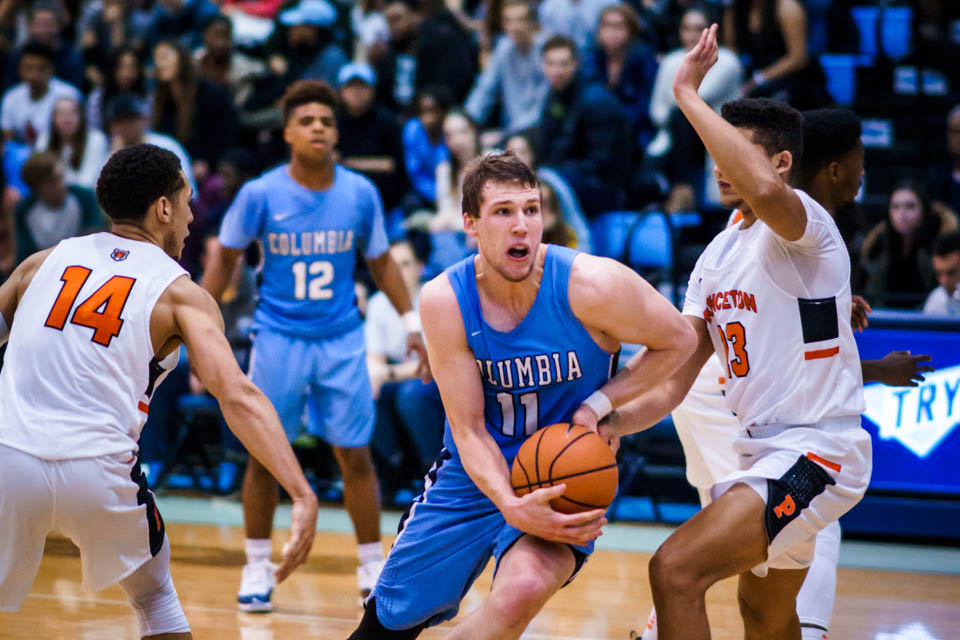 Lukas Meisner drives towards the basket during a home game against Princeton in February 2018. He signed with German team Medi Bayreuth on July, forgoing his final year of NCAA eligibility.

Meisner, a native of Braunschweig, Germany, will now get to test his talents in the top league of his home country, in lieu of finishing his degree at Columbia.

Engles praised Meisner’s contributions to the team during his three years in Morningside Heights.

“I think it's a great opportunity for Lukas, it's something that him and his family had good discussions about,” head coach Jim Engles said. “I'm excited for Lukas because I know that was one of his goals, and he's certainly someone that's worked very hard to put himself in a position to be successful so it's going to be fun to watch him as he continues to progress, and as he becomes the professional that when he got to Columbia he was looking forward to being.”

The loss of Meisner will be a difficult one for Engles and company on both sides of the ball. The 6-foot-8 forward led the Ivy League in rebounds per game at 7.5 this past season and finished third on the team in scoring at 11 points per contest.

His loss will certainly be felt by a Columbia squad that now looks perilously small and inexperienced in the frontcourt, especially given the transfers of Faulds and Hanson. Meisner’s departure leaves rising junior big man Patrick Tapé as the only returning player who averaged more than four rebounds per game last year.

Engles declined to comment on the departures of Faulds and Hanson, noting that he was fully focused on the upcoming season, including the team’s new recruiting class.

Incoming first-year 6-foot-7 forward Ike Nweke, a member of Engles’ second full recruiting class at Columbia, may have a chance to start amid the absence of Meisner. However, it still remains to be seen how Columbia will replace three expected contributors on a team that struggled mightily a season ago.

The uber-efficient Meisner will join a Medi Bayreuth team that finished sixth in Germany last season. Meisner becomes the fifth Lion to turn pro in the last three years, and the second basketball player to depart Columbia before graduation to do so in the past two seasons, alongside women’s basketball’s Paulina Koerner.

“I think the guys were happy for him, they know Lukas and they know what he's about,” Engles said. “Being his friend, I think they were disappointed to see him go, because they obviously know how supportive he is, but I know they're sort of excited to watch him as he goes on with his career.”