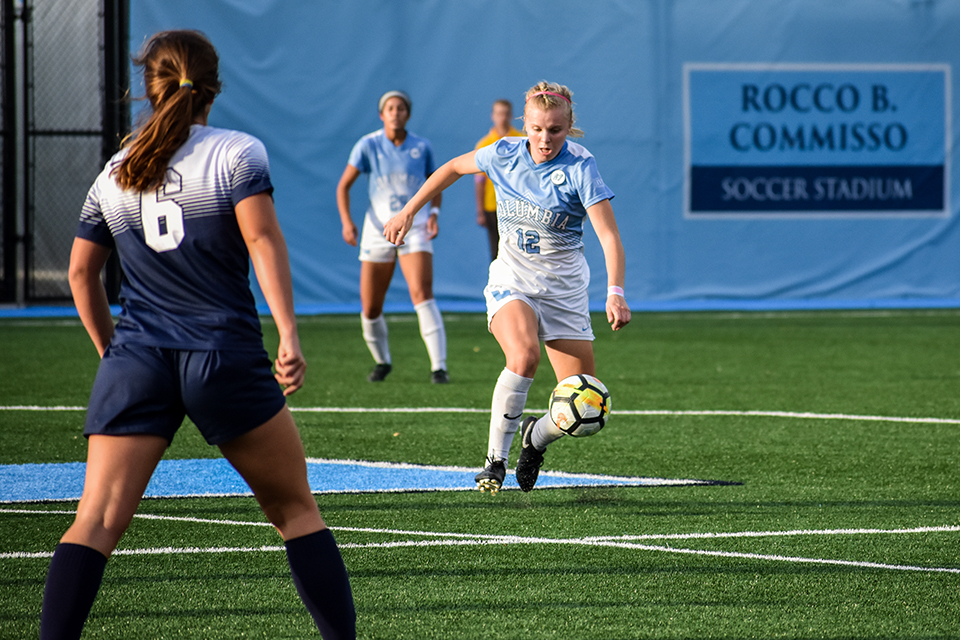 Lions fans were held in suspense on Saturday, but they were ultimately rewarded with a late equalizer and eventual overtime game-winner.

After trailing Cornell for most of the game, women’s soccer went on to win its Ivy League opener 2-1 this Saturday in double overtime.

The Lions (4-4-1, 1-0 Ivy) came into Saturday with a three-game losing streak, having lost most recently 0-4 to the formidable Georgetown Hoyas, and early on against Cornell (1-6-1, 0-1 Ivy), the Lions’ prospects seemed no better; the Big Red bagged an early lead with a successful shot from a corner kick in the 24th minute.

Columbia created several offensive chances throughout the first half, firing off eight shots and forcing four saves from the Cornell keeper, but failed to find the back of the net before halftime.

In the second half, the Lions’ shooting continued, as they outshot Cornell 25-0. The Lions struggled to connect until the 87th minute of play, when senior forward Rachel Alexander scored the equalizer. The late goal, which forced overtime, came as a relief to head coach Tracey Bartholomew and the anxious but now-excited crowd.

“We’re just like ‘yes, okay now we have a chance,’” Bartholomew said. “Talking about overtime, we have 20 minutes to try to find a way to score.”

The Lions continued to control the game through the first round of overtime and into the second, with junior midfielder Maddie Temares ultimately scoring in the 101st minute, with an assist by Alexander, to end the game and secure Columbia an Ivy win.

“Maddie T’s finish was exceptional,” Bartholomew said. “She’s been scoring great goals for us with that. I think she did a phenomenal job.”

While the Lions depended on the experience of Alexander and Temares, they relied on their depth to continue creating opportunities into overtime.

“I feel like we wore down the back line with the number of players that kept coming in and grinding,” Bartholomew said. “Rachel had an awesome game, it was so good to have her as a senior leader.”

Throughout this season so far, the Lions have had trouble finishing scoring chances, regularly producing a high number of shots but often without reward. So far this year, the average Ivy team has had 5.90 shots on goal per goal, while the Lions have had 7.56.

This Saturday, the Lions took 17 shots on goal compared to Cornell’s one. Following the win, however, Bartholomew was positive about the team’s performance thus far.

“The reality is we’ve been playing well, we just kept talking to the players about just believing that the goals are going to come,” Bartholomew said.

Women’s soccer now looks toward an away game against Brown. This weekend, Brown lost to Dartmouth, yet while Columbia is celebrating its win, Bartholomew is expecting another difficult matchup.

“You know they are going to be tough. Every Ivy game is an absolute battle,” Bartholomew said. “Obviously these guys will enjoy this moment, but at the same time they will get refocused and get ready to play Brown.”

Kickoff against Brown is set for 3 p.m. on Saturday, Sept. 29 at Brown.