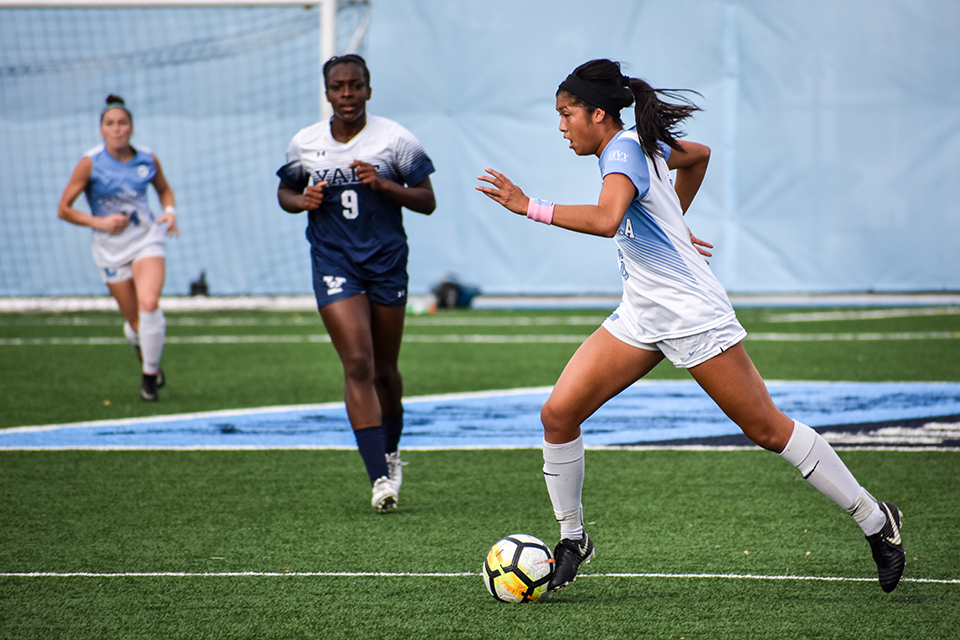 The Lions failed to score against Penn and are now a point behind the three teams tied for first place in the Ivy League standings.

Women’s soccer fell to Penn 1-0 this weekend in Philadelphia, ending its undefeated Ivy run and falling from the top of the conference table.

On Friday afternoon, Columbia (5-5-1, Ivy 2-1) started strong with a corner kick and a blocked shot attempt in the first minute of the game. Both sides had dangerous attempts throughout the first half, such as a 33rd minute shot that hit the crossbar from Penn (8-1-1, 2-0-1 Ivy), but went into the locker room tied at 0-0.

In the 51st minute, Penn took the first shot after the break with a headed attempt on goal. Senior goalkeeper Sophie Whitehouse deflected the shot, but the rebound was favorable for Penn and junior Emily Sands put the Quakers up 1-0.

The Lions forced Penn’s keeper, junior Kitty Qu, to make one more save in the second half, but failed to get the goal that they needed to equalize. Since 2016, Qu has been an unstoppable force for the Quakers. Last season, she boasted the best save percentage in the Ivy League—0.890—and allowed only 0.55 goals per game—just over one goal per two games.

Compared to the Lions’ nine shots, the Quakers put up 12, three on goal, and found the vital one needed to end the weekend alongside Dartmouth and Harvard atop the Ivy League. The Lions, on the other hand, sit behind the three teams in first place by one point, and will have a chance to build on this weekend’s performance with a midweek game against out-of-conference opponent Lafayette.

Lafayette (4-8) will enter Monday’s match in New York City sporting a four-game losing streak, having fallen most recently 0-2 to Colgate on Saturday. Not only have the Leopards lost their last four games, all Patriot League conference matchups, but they have also failed to score in each match.

Columbia’s match against Lafayette on Monday will be its first since 2016, when the teams drew. While the Lions trail 2-3-1 in total games against Lafayette, Columbia’s performance this year places a win well within reach. A victory against Lafayette could help the Lions going into the remainder of the Ivy League season and the much-anticipated matchup against Princeton at home next weekend.