From ‘nowhere’ to top seven: Sophomores chase the Ivy League

From ‘nowhere’ to top seven: Sophomores chase the Ivy League 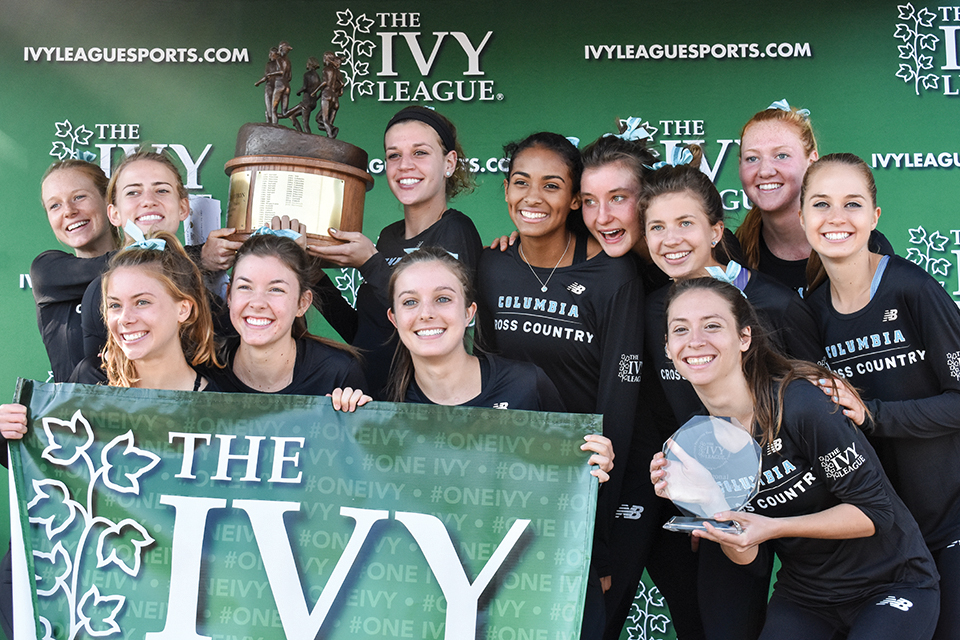 Three current sophomores—present but not contributing to the teams success last season—look to forge their own path.

Led by then-seniors Nell Crosby, CC ’18, Erin Melly, CC ’18, and Sarah Hardie, CC ’18, women’s cross country cruised past the competition in Ancient Eight meets en route to a title last season. As they lifted the the trophy, then-first-years Allie Hays, Maria Kogan, and Serena Tripodi stood by, partaking in a victory they had not helped earn.

But after the year concluded, and once Crosby, Melly, and Hardie departed Columbia, head coach Dan Ireland was left with a central dilemma: How would he replicate that remarkable success having lost three key contributors?

As the women’s cross country team chases a second consecutive Ivy League Title, this trio of runners has been nothing short of a revelation, emerging seemingly from nowhere and mirroring the contributions of the team’s lost leaders.

Most recently, Hays led the Lions to an unprecedented 11th-place finish at the Wisconsin Nuttycombe Invitational, one of the nation’s premier races.

In Madison, Hays placed 43rd overall with her time of 20:36.8, a mere eight seconds slower than Crosby’s 35th-place finish at the 2017 Wisconsin Nuttycombe Invitational. As the Lions set their sights on the postseason, Hays is poised to succeed Crosby’s role as the team’s top runner.

Although Hays is chasing individual milestones, the rest of the Lions will hope to contribute at the 2018 Ivy League Heptagonal Championship in order to compete for the title. Fellow second-years Kogan and Tripodi impressed at the Wisconsin Nuttycombe Invitational as well. They logged times of 21:03.5 and 21:09.4, respectively, on par with Melly and Hardie’s 21:02.3 and 21:09.2 respective finishes at the same event in 2017. 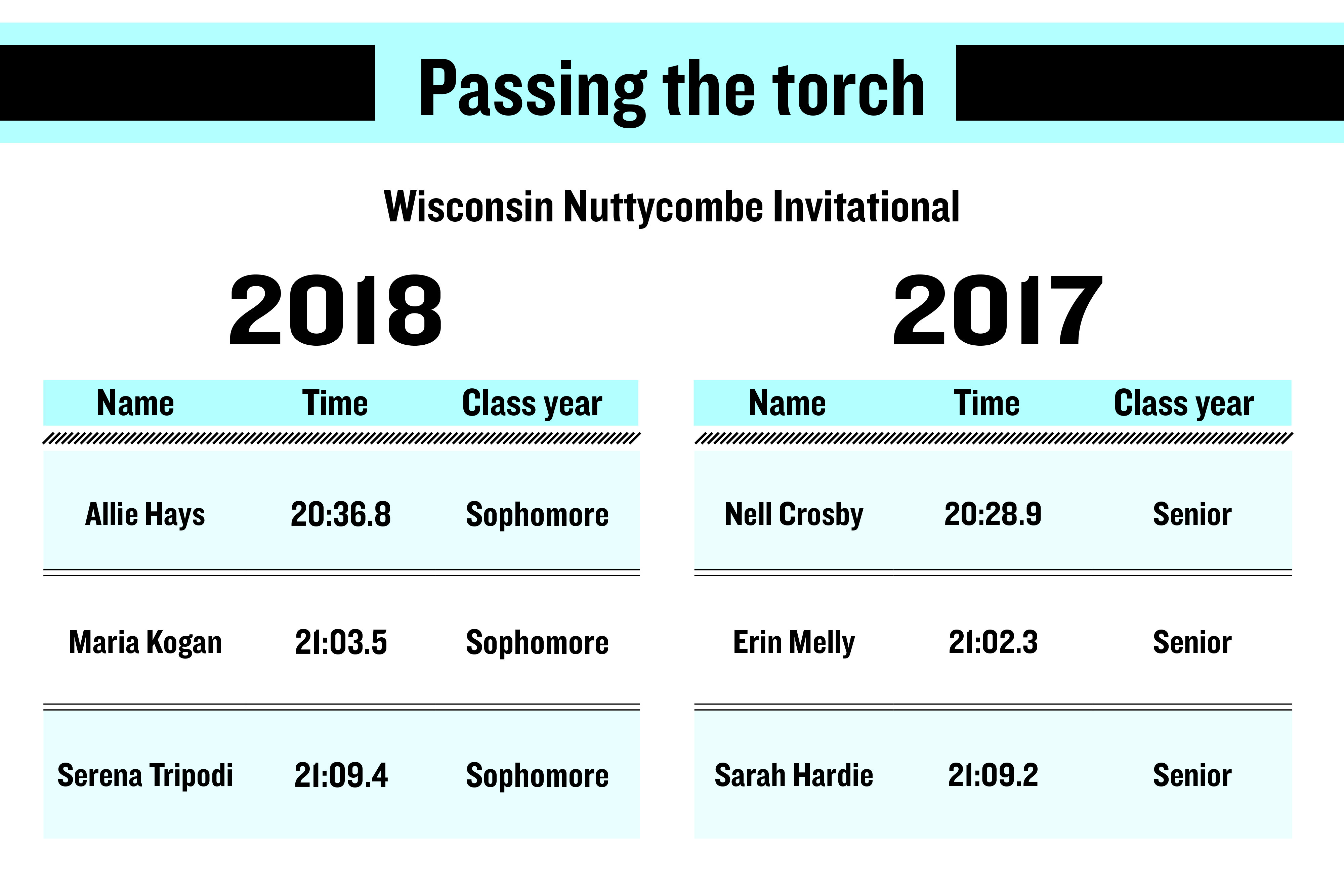 At this time last year, Hays, Kogan, and Tripodi could have never imagined facing such lofty expectations, let alone the opportunity to even run at the nation’s most competitive regular season 6k race.

Looking back on her first year, Hays describes her fall season as “not pretty.” Although she remembers a debut season that was lackluster at best, she registered an impressive 31st-place, 22:26 result at the 2017 Princeton Invitational. As the Light Blue’s fourth finisher, Hays’ performance in a pool of 180 competitors solidified the Lions’ championship title at the meet.

Nonetheless, time has obscured that contribution, and almost a year later, Hays recalls a fall season beset by the challenges of the college lifestyle.

“It had to do a lot with the technical aspects of just getting to college and adjusting to a different sleep schedule,” Hays said. “Different work, differences in my training, just in general not feeling great, not feeling well, getting sick randomly.”

Tripodi, who endured bouts of flu and bronchitis, shared in much of Hays’ frustration. The persistent demands of transitioning into college resulted in seasons that felt “incomplete,” according to Hays.

Kogan didn’t describe her first year in exactly the same terms—it was upsetting by similar standards, but it was in no way incomplete. Incomplete necessitates existence, and for Kogan, her fall 2017 season existed only in theory.

She did not place. She did not even run. She nursed two injuries—a stress fracture and torn ligament in her knee.

Kogan’s injuries developed in the summer before her first fall at Columbia. After a six-month hiatus, Kogan laced up her New Balance 860v8’s to join her team for the first time at practice. She trained throughout the spring semester. Progress was slow and steady, but it did not win her races.

And yet, she was not deterred. In fact, going into this past summer—with Ireland’s prescribed workout schedule and a grounded conscience—Kogan was more motivated than ever. She fell into a rhythm and by August was running 60 miles per week. She notes that, while she pushed her body beyond its limits heading into her first season, she learned from that experience and developed much healthier training habits in preparation for her sophomore campaign.

“I think I had the pressure, or I put the pressure on myself, as a walk-on, that I had to improve a lot and so I don’t think I trained in the smartest way. I overdid it,” Kogan said. “[This year] I was able to drop all expectations that I set for myself and just go in with the mentality of listening to my body.”

While Kogan ran at home on Long Island, Hays grounded herself in Manhattan this summer— living a few blocks away from campus along with other members of the team. She started her days at 5:30 a.m. for runs in Central Park before work. Her schedule was demanding. She was tired. But in the moments of great intensity and monotony, she looked to her teammates for motivation.

“I’m running and I’m just thinking—okay—I’m tired. But I want to do this,” Hays noted. “My teammates are doing the exact same thing, probably in the same park.”

It’s that very sense of solidarity and resilience that propelled Hays, Kogan, and Tripodi to the forefront of the Columbia roster this fall. Yet, none of them are anomalies. According to Kogan, everyone on the team has the potential to make an impact. She states plainly and with great humility that, at one point, she was the slowest runner on the team during her first year. Now in the top seven, Kogan refers still to Ireland’s message of humble persistence.

“What we tell everyone is ‘don't think you'll never matter.’ You might not be scoring at the Ivy Champs, you might not even be in our top 12, but you have to keep working hard,” Ireland said. “If you're not putting in the miles you can't go from where those girls were—irrelevant—to being really good. You've got to put in the time.”

These miles and this effort of which Ireland speaks have characterized the evolution of these three sophomores from inconsequential first-years to team leaders in hot pursuit of an Ivy League Title.

And so far, it’s worked out.

“We’re going to put pressure on ourselves because we’re all athletes, but I think that helps to fuel the fire,” Tripodi said. “We know that we have a target on our backs. We all want it so badly. There’s nothing sweeter than victory.”