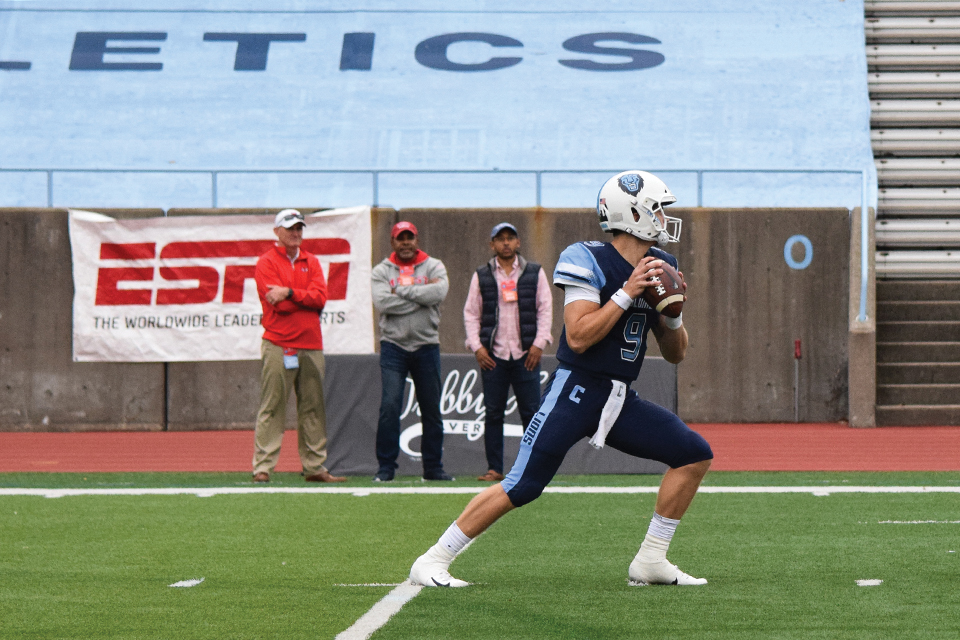 Columbia will likely benefit from the new ESPN television deal, causing more of its games to be televised.

Athletics coverage of the Ancient Eight is going modern.

After years of broadcasting games across a myriad of television channels and separate networks, the Ivy League will partner with ESPN to concentrate over 1,100 events across 30 sports on a single platform.

The deal, announced on April 4, will run for 10 years starting this fall and should completely revamp the Ivy League sports fan experience.

Previously, access to televised Ivy League games was difficult both logistically and monetarily— ESPN3 streamed roughly 85 various Ivy games per year across their many channels, football games were occasionally televised on NBC Sports Network, and anything else was on the Ivy League Digital Network for a subscription price of $119.50 per year.

This price was inhibitory to many potential viewers—something not lost on Ivy League Executive Director Robin Harris and her colleagues.

“We frankly wanted to expand the viewership of [Ivy League] events,” Harris said. “We knew that there were about 50 percent of the people that came to the Ivy League network [that] chose not to subscribe.”

Now, for just $4.99 per month, viewers can watch almost every Ivy League sporting event. At least 24 major events will be live on an ESPN primary network over the course of the 2018-2019 academic calendar, and all the rest can be found on the platform that made this deal possible, ESPN+.

ESPN+ is where the subscription comes in—for less than $60 per year it gives access to not only the Ivy League, but also MLB, NHL and MLS games, Grand Slam tennis, Top Rank boxing, PGA Tour golf, additional college sports, international rugby, cricket, varied analysis programming, and the full library of ESPN Films. It launched on April 12 as part of an ESPN App and espn.com redesign and gained over a million subscribers in its first five months.

A major upside of this deal for both sides, Harris noted, is the introduction of new markets. Fans of other sports or leagues will have Ivy League athletics at their fingertips—same with Ivy League fans who, say, are interested in professional soccer.

“[Subscribers] are getting more content besides the Ivy League. And our games show up when you look for other games—they're right by US Open Tennis, they're right by the Power 5 football games, they're right by Major League Baseball and NHL games,” Harris said. “So the opportunity for a more casual fan to say, 'Hey, Princeton and Columbia are playing, let me watch this game' has gone up exponentially.”

The exposure for a rapidly improving brand was just as key. Harris emphasized the ascending talent in the Ivy, which featured 98 nationally ranked sports teams last year. Columbia head football coach Al Bagnoli echoed that sentiment, calling the current state of Ivy football “the best it’s ever been.” The deal with ESPN seems to be coming at the perfect time for an athletic conference more than ready to make a national impression.

Harris orchestrated much of the deal with Matt Panto, Ivy League associate executive director for Strategic Communications and External Relationships. According to the pair, while a deal had been in the works for years, it was no guarantee. Nevertheless, they did their homework and met with multiple other providers before ultimately settling on the awesome capacity of The Worldwide Leader. ESPN+ was the final selling point.

“ESPN rose to the top with their commitment to ‘Plus,’ their ability not only to feature 24 regular season events and our tournaments on linear television—on ESPNU and News—but also to tape more than 1,100 broadcasts on ‘Plus,’” Harris said.

Money also played a factor. According to Panto, as part of the agreement, the Ivy League receives a rights fee from ESPN that allows it to considerably offset part of the cost of producing so many live matches.

Major networks with millions of subscribers—ESPN was at roughly 90 million a year ago despite their recent well-publicized losses—tend to concentrate their bases in major metropolitan areas. More people will likely be on ESPN+ in New York than in any of the other seven Ivy League locations due to its larger population. Columbia, historically an athletic footnote in the Ivy, stands to benefit more than any as the local team available to numerous new viewers.

Yet beyond the monetary benefits, the fan experience, the brand of the league, and individual schools, those involved stress the notion that the most important impact will be on student-athletes and their families.

“It’s nice to be able to tell mom, who may also have two other children at home and not be able to get on a plane every weekend to come East, ‘You’re gonna see your son play every game,’ That’s a huge thing for people who have been very much front and center of their son’s athletic life,” Bagnoli said.

Tracey Bartholomew, the head coach of Columbia women’s soccer, added that the national exposure is wholly unique for such relatively young players.

“Anyone who follows sports knows ESPN,” Bartholomew said. “So when you add that front, whether it's a ‘Plus’ or a ‘U’ or something like that, I think you're excited for the players.”

In such competitive, academic schools, a lot of pressure comes down to student-athletes to perform and excel in their sport while still maintaining grades and relationships. Harris reiterated that she sees this deal as an opportunity to shine a spotlight on some of the incredible players within the Ancient Eight.

“Throughout the year, we're going to be featuring incredible athletes who are real students,” Harris said. “The ESPN platform really provides a terrific opportunity for us to talk about some of those student-athletes and tell their stories.”

For many players, the spotlight is nothing new. They have performed on big stages for years—now, on national television, they finally get to show the world what they can do.

According to football’s vocal leader, senior safety, and two-year football captain Landon Baty, there is no pressure, only excitement.

“It’s getting us in the books more, watching more film,” Baty said. “How could you not be pumped up about playing Friday night on ESPN?”