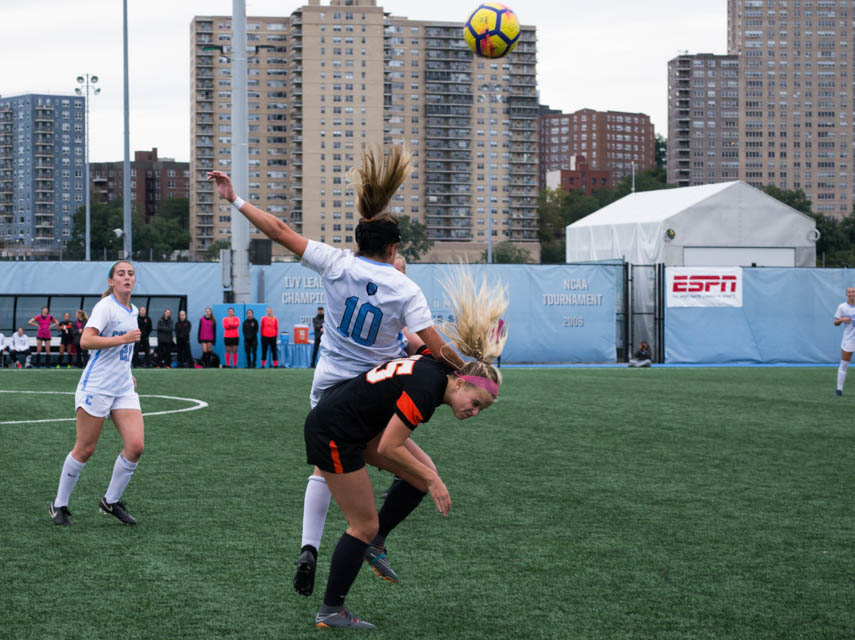 Women's soccer was shut out 1-0 by Princeton on Sunday in New York.

Women’s soccer fell to Princeton 0-1 on Sunday afternoon as the Lions (6-6-1, Ivy 2-2) struggled to score despite creating numerous chances.

Princeton (8-3-2, Ivy 2-1-1) looked strong from the start and controlled the ball for the majority of the first half. The first and only goal of the game came in the 38th minute from Princeton’s Amy Paternoster, who scored from the center of the box past junior goalkeeper Sophie Whitehouse.

“Our effort in the first half, we were a little off. We were reactive versus sort of putting the stance that we wanted to put on the game,” Columbia head coach Tracey Bartholomew said. “We were a completely different team in the second half.”

The Lions largely controlled possession in the second half, abandoning their “reactive” play and putting up three shots on goal after the break. Sophomore forward Jordyn Geller had two shots on goal, but neither Geller nor any of the other Lions could find the back of the net.

The discrepancy between the Lions’ performances in the first and second halves troubled Bartholomew, who emphasized a need for more consistent play throughout 90 minutes as opposed to strong moments or halves.

Despite a late surge in offensive energy from the Lions, they failed to equalize or overtake the Tigers. On the defensive end, however, several successful tackles by junior defender Amalya Johnson kept Princeton from going ahead further. Additionally, the Columbia shut down star Princeton forward Mimi Asom, who currently leads the Ivy League in both shots and goals.

“I thought Amalya did a great job on the back line,” Bartholomew said. “Mimi is one of the best forwards in the country... She only had a couple of shots in the game which for her, that’s a big deal to really be limited that way.”